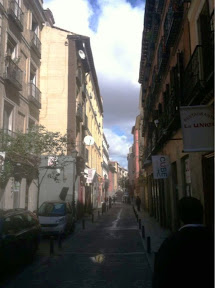 A GOOD MANY YEARS ago we found a marvelous restaurant on the Rue Taylor in Paris, Chez Nick. They served only bouillabaisse and a Grand Aïoli, nothing more, and each was superb. The restaurant was very modest and inexpensive, with a bar down the left as you enter, a few tables, the kitchen at the back. Nick, a Marseillais, presided over the kitchen; his wife, whose name I never knew, over the bar and dining room.
We ate there two or three times, then skipped Paris for a number of years. When we finally returned I insisted on stopping at Chez Nick. It's probably gone, Lindsey said, as she always does, throwing cold water on my fondest plans. Nonsense, I said, Chez NIck has always been utterly reliable.
We walked up and down the Rue Taylor but could not recall exactly where it had been — nor did it jump out at us.
Finally, way down the street, I spied an ancient woman with a cane, a young woman helping her at her elbow, slowly hobbling toward us. I fixed my eye on her: obviously a local resident. She must know.
As she drew nearer she eyed me suspiciously, as well she might: bearded, long-haired, not particularly well dressed, and huge compared to her, I might have been trouble, even though I was accompanied by a clearly decent and well-behaved lady.
Pardon, madame, connaissez-vous un restaurant qui s'appelle Chez NIck, I asked in my flawless non-Parisian French. Her look of anguished misgiving dissolved into an expression of sweet nostalgia.
Ah, mussieu, Chez Nick, c'etait un restaurant, c'etait si bon… non, mussieu, je regrette, c'est fini Chez Nick.
So Lindsey was for once right, one couldn't go home again, the snows of yesteryear were melted well and truly. And today we were at Chez Nick again.
In years past we've liked La Fuencisla, in Madrid, on the Calle San Mateo, no. 4. Naturally I looked it up yesterday, our first day here, only to find it was in some question, with only a few references on the Internet. The first included a glowing description, falling in with what I remembered of the place, but was followed by three troubling and enigmatic comments:

Gerardo, 12:34 pm: There was a time I wanted to reserve, but no one answered the telephone. Is it still open?
Anonymous, 1:21 am: It's closed Señora Teresa died and it closed
Anonymous, 12:53 pm: She isn't dead and functions perfectly

Now that last entry is ambiguous, No esta muerta could conceivably refer to either Señora Teresa or the establishment itself, if you stretch a grammatical point. So today we simply stopped by to see for ourselves.
Well, not so simply; I had described the location imperfectly in my book Mostly Spain, which I was ill-advisedly using as a source. Down one street and across to another we went, asking in at shops and apartment-house doorways, finally closing in on the location, where we found a hot-dog-and-hamburger joint-cum-cocktail-lounge, where a young man was perched on a ladder at the front door, washing the transom.
Is this La Fuencisla, I asked, doubtfully. Yes and no, he answered, La Fuencisla was here, but it changed four years ago. It changed, I said, did it change a lot?
Go in and have a look, he said, it's not the same. I peered inside. No, it was not the same at all. No old men playing cards at dusty tables, a bottle of wine at the elbow; no promising dining room beyond. No Señora Teresa of the delicious eponymous soup.
Another traditional Madrileño location has given way to Americanization. Chez Nick at least had the decency simply to disappear; La Fuecisla has not dried up, but been quite polluted. Oh well: there was a perfectly acceptable Asturiana place not far away…
- Posted using BlogPress from my iPad

Posted by Charles Shere at 9:54 AM

One of the great remarkable aspects of growing older, as we all do--as time itself ages, as it were--is the disappearance of things once known.

In childhood, we regard the world as fixed, or "growing" up.

As a child in the California of the 1950's, I felt everything was expanding--new houses, new businesses. Growth and prosperity.

The older we get, the more change we experience. In some parts of the world, change happens much less rapidly. In parts of Europe, people still live a life pretty much as their ancestors did hundreds of years ago.

There are at least five restaurants I can remember from earlier decades, along Solano Avenue in Berkeley-Albany, which no longer exist. One, Vin et Fromage, had been there at least 10 years when I "rediscovered" it, before it disappeared. I knew this since a family friend had worked there as a waiter back in the early 1960's. The place where it used to be now is occupied by two places: a bike shop and a small chain called Cugini's (Italian).

If I could turn back the clock and have a bowl of the rich tomato soup they used to serve at Vin et Fromage, I certainly would.

I wonder if my little friend Isamu at the camera shop in Misawa (Japan) is still alive, or if he still runs it. But that was 28 years ago. Surely he must have died by now.

It's as the beer commercial says: We're only going round this place once, and we won't be back.

Vin et Fromage, where I heard a fine performance of my Ces désirs du quatuor, and we learned to love Chateau Moncontour, the delicious not-quite-dry Vouvray that was so inexpensive…