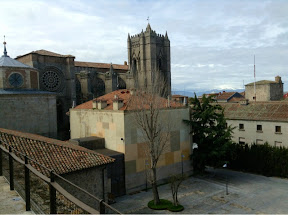 Avila, March 31, 2013—
A FAVORITE CITY of mine, Ávila, accent the first syllable, please, is a small old city, still entirely encircled by its great and beautiful medieval wall, only an hour or two from Madrid, but much higher — one of the highest cities in Europe, in fact — and therefore cool, even cold, and rather sober. A perfect place to be at Easter.

It is the home town of Teresa of Avila, of course. Her convent is an impressive site, but we will not visit it again this trip; we content ourselves with a single Sunday and the two contiguous nights, in a very pleasant hotel on the cathedral square. Today we walked the ramparts, which takes two or three hours if you rest and dawdle along the way, as well you might at our age, as the steps are high and shallow and often uncertain.

And, more to the point, the views are enticing. At every step there's something so interesting, or beautiful, or arresting, that you're compelled to take yet a other photo. There's the wall itself, of course, massive, forty or fifty feet high, ten or twelve thick, with its crenelated parapet and its frequent lookouts. The stone is limestone, I suppose, a soft warm beige color, cut into massive blocks, and the details — the triangular caps of the crenellations, for example, which are infilled with brick tile; and the huge corbels, beautifully sculpted with softly rounded edges — are repeated with a precision suggestive of great discipline and thoughtful planning.

Clearly a master architect was at work here, whether an individual or a committee or, very likely, a succession of individuals; the work must have extended over centuries, and involved, as my brother remarked, evolving additions and improvements.

One of the things that pleases me most is the playfulness of the geometry. Watchtowers are often set at surprising angles; staircases climb to them steeply nearly always with fifteen risers, but at angles that are both practical and, to my eye at least, refreshing. No doubt it had to be possible to use these details with alacrity, even in the dark, the rain, in freezing weather: but I can't help thinking even rushing defenders — and for that matter the laborers carrying stones and baskets of mortar or pails of water — must have appreciated the physical beauty of the public work they were defending.
Geometrical beauty like this has a civic function. Its clarity of purpose, its solidity and perdurance, express moral clarity and rectitude. And containing the city it defines its relationship to the resources beyond the walls, the fields and groves, the river and the distant mountains whose grains and fruits, snows and quarries contribute so much to a society organized to common benefit.

The low mountains define a horizon not really that far away. Everything here feels high: the air is cool, clean, crisp; the plains undulate easily, rising to that skyline. The light is utterly clear and transparent but, oddly, soft and luminous. Gazing out from these ramparts over the fields one can't help feeling the kind of certainty, order, and tranquility that must have informed Teresa, whose fine mind resolved sensual and moral sensibilities with so little trouble.

Last night we stood among the rather small, respectful group of onlookers along the street just outside the wall, watching the Holy Saturday procession. It felt very similar to the one in Madrid I described in my previous post, but also very different. For one thing, it was not dark, not at the beginning. And we were much closer to the marchers, more aware of their individual faces and manner.

Again, I was impressed, moved, by the determination they express; by their sobriety and dedication amd purposefulness. Avila was a city before the Romans came; she has seen cults and cultures come and go, and doubtless will see more. The procession reminded me of the slow and generalized relationship of communities and their undertakings to the contexts they inherit from the mountains and the fields and from the great works left to them by their predecessors — whether physical, like the cathedral, the walls, the chapels; or intellectual, like the songs and the literature and the enigmatic sculpture from archaic times.

We live, learn, flourish, and fail, we individuals and the societies and cultures we make; and around us the light and the open skies and the mountains do the same, at their vastly different paces; and I find something hugely comforting in all that.

It is odd, don't you think, to be at this juncture in history, visiting and exploring and meditating upon these very old monuments to insularity and defensiveness and heavy commitment. Their purposes and uses, which long ago were rendered irrelevant, they continue to stand as symbols and vestiges of an abandoned way of life. So we celebrate and praise their solidity and ambition and durability, even as we gratefully drift further and further from the principles and purposes that dictated their construction.

Who would want to spend his whole life behind a wall? Who would wish to give his life for his petty lord? Who would be terrified to explore the world beyond the surrounding countryside?

We are intellectual tourists as well as real ones. What is it we are seeking in places like this?

You raise so many points, all of which are the subjects (though not all of them) of my continued meditations. It is precisely to address these points that we travel, observe, reflect, write. I take exception to a couple of your terms — "insularity," "defensiveness" — but of course I see whence your thought arises. I'll try to address some of these points next time.