We hold these truths… 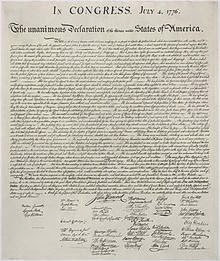 Eastside Road, February 3, 2015—
THIS IS A MADDENING BOOK, addressing a topic of great historical importance and overwhelming contemporary urgency, and in the process illustrating the value of close reading even to the lay public — but written in a prose style, and with an authorial posture, that seems determined to repel any reader but those already possessed of the point.

Allen's subject is perfectly expressed in her title and subtitle. She rightly addresses the Declaration as a document — the document — which establishes, as the reasons and justification of the colonists' determination to secede from the British Empire, the concept of a free egalitarian society governed for the purpose of guaranteeing individual rights. The Declaration sets forth a detailed complaint of the deliberate refusal of the British king to govern in this manner, and announces the former colonists' intention to provide that government for themselves.

Allen's impetus was apparently a course she gave in an adult education context, at first with the intent of encouraging close reading of a text in order to plumb both the original and the contemporary implications of the content of the text. Her previously published titles suggest, however, that the choice of the Declaration of Independence, and her own reading which emphasizes egalitarianism, was a logical one:

The World of Prometheus: The Politics of Punishing in Democratic Athens, Princeton University Press, 2000
Talking to Strangers: Anxieties of Citizenship Since Brown vs. the Board of Education, University of Chicago Press, 2004
Why Plato Wrote, John Wiley & Sons, Limited, 2010

I have not seen these titles, which (judging from comments on the Internet) are concerned with demonstrating the relevance of historical literature, and specifically political literature, to issues of our own time — a laudable concern for a thoughtful writer to address.

It must be stated at the outset: though an academic, Allen writes for a mass audience. She begins Our Declaration with an account of the dinnertable conversations of her childhood, a mix of Christianity, liberal politics, communitarianism, a healthy regard for education, and the social awareness likely to prevail in a metropolitan American mixed-race household in the 1970s and early '80s.

And clearly her double intent is to demonstrate the value of close, attentive, and collaborative reading, as well as the (literally) revolutionary concepts of freedom and equality that are present at the beginning of our nation, pointing out that whereas freedom is implicit in a declaration of independence, equality is immediately stated as its adjunct:

When in the Course of human events, it becomes necessary for one people to dissolve the political bands which have connected them with another, and to assume among the powers of the earth, the separate and equal station to which the Laws of Nature and of Nature's God entitle them, a decent respect to the opinions of mankind requires that they should declare the causes which impel them to the separation.
Declaration of Independence, preamble (emphasis mine)

Of course it is the next sentence that most memorably insists on equality as the foundation of the American political ideal:

We hold these truths to be self-evident, that all men are created equal, that they are endowed by their Creator with certain unalienable Rights, that among these are Life, Liberty and the pursuit of Happiness [,—]

—and here, Allen writes, a crux immediately appears: for most contemporary copies of the Declaration put a period after that word "Happiness," whereas the working documents (and her own analysis) suggests those lines are merely the first of three clauses forming not only one complete sentence but, more importantly, a logical syllogism justifying the very concept of the colonists' action:

[,—] That to secure these rights, Governments are instituted among Men, deriving their just powers from the consent of the governed, [,—]

That whenever any Form of Government becomes destructive of these ends, it is the Right of the People to alter or to abolish it, and to institute new Government, laying its foundation on such principles and organizing its powers in such form, as to them shall seem most likely to effect their Safety and Happiness.

To establish a government capable of guaranteeing freedom from tyranny, Allen argues — whether British tyranny as the colonies had experienced it, or any subsequent tyranny that might be visited, from foreign or domestic sources — the new society would have to be founded on the concept of equality. And not only equality: five "facets" of equality:

We have followed the Declaration sentence by sentence as it set out principles, among them the proposition, as Lincoln called it, that all men are created equal. We have tracked it through its presentation of an important syllogism about equality, rights, and government. We then pursued the argument as the Declaration laid out matters of fact to generate propositions about tyranny and good government. Along the way, we have mastered four out of the five facets of equality presented in the Declaration. The ideal of equality designates freedom from domination, equality of the opportunity to use the tool of government, the use of egalitarian methods to generate collective intelligence, and an equality of agency achieved through practices of reciprocity. The time has come to draw some conclusions.

Indeed, we are on the cusp of the sentences in which the Declaration draws its own conclusions… And as the Declaration concludes, it also presents its fifth and final facet of equality: equality as co-creation and co-ownership of our shared world.
Our Declaration
, p. 258

I detach from Allen's gently hectoring style the points she is eager to have us consider, her five facets:

Allen's book is urgently significant and important in today's political climate, which as she points out values "freedom" (in the guise of libertarianism) to the exclusion of egalitarianism. Half the country, it seems, has lost sight of the purpose of government, as defined in the Declaration of Independence:

Governments are instituted among Men
to secure these rights[:]
Life, Liberty, and the pursuit of Happiness

— lines energizing any number of individualists often more concerned with their own liberties than those of their neighbors, forgetting that the very first sentence of the Constitution, the indispensable adjunct to the Declaration, reads

We the people of the United States, in order to form a more perfect union, establish justice, insure domestic tranquility, provide for the common defense, promote the general welfare, and secure the blessings of liberty to ourselves and our posterity, do ordain and establish this Constitution for the United States of America.
[emphasis mine]

Allen's point is that individual rights cannot obtain except in an egalitarian society, organized "on such principles and… in such form" as to secure the "Safety and Happiness" of "the People."

Much of her book deals with the vexing question of slavery as it existed at the time of the writing of the Declaration of Independence — indeed, as it was practiced by one of the chief authors, Thomas Jefferson. I find her discussion of the subject tentative and apologetic, as if aware of the logical absurdity of condemning past periods for not sharing subsequently changed attitudes. Her explanation for the historical difficulty is that the "course of human events" that would lead toward the abolition of slavery throughout the nation was only begun when the Declaration of Independence was drafted; presumably the authors foresaw the inevitable, but preferred to undertake one revolution at a time.

Recent events, of course, prove the concept of equality of station and opportunity is still not embraced unanimously, and Our Declaration will not persuade exceptionalists of its moral imperative or its practical value. It is in fact a difficult concept, particularly when the implications of our governmental foundation are extended to our nation's international relations and presence. The Declaration of Independence is in fact an idealistic document, proclaiming how things ought to be in order to justify rebelling against things as they are. But it is an idealistic document born of the Age of Reason, of the Enlightenment. It virtually single-handedly overcame millennia of oppressive tyranny founded on "the divine right of kings," replacing top-down rule with "government of the people, by the people, and for the people." We have perhaps inevitably declined in moral courage and intellectual acumen since the days of Adams, Lee, Franklin, and Jefferson. Society today is too fragmented, fast, and materialistic to replicate their achievement; perhaps even to comprehend them. But Allen makes a useful attempt to explain that achievement to today's reader.

I see the current popular paradigm of "globalism" as being an expression of the unregulated entrepreneurial spirit of exploitation and continous "growth" as applied to everything that we do and think.

Humans have transformed the planet, covering the earth with their kind, dominating the landscape, pushing aside nature and other creatures when it suited them, and generally raising havoc with the rhythms and processes that existed prior to our ascendancy. That success is an expression of successful reproduction, and it will doubtless be moderated in the sudden and catastrophic way nature deals with such hubris--through mass die-offs and convulsions. The only question is which of the various tipping-points will happen first, or in what order.

Nations may be one platform in the historical evolution of this expansion. Before the age of exploration, mankind was isolated into myriad pockets and regional "provincialities" such as language, religion, technologies, etc.

The profoundly destructive effect of "globalism" upon the vast variety and "diversity" of these provincialities can be seen everywhere.

In the meantime, we are still a world of nations, and nations are only authorized to dictate within the terms of their extent (or borders). No nation can be all things to all men, and no nation can presume to dictate to its neighbors.

We can be a shining example to the rest of the world, and we can lend a hand when it serves a higher purpose. But it is not our immediate responsibility to right all the world's wrongs, or to fight in every cause, or to be the world's baby-sitter. The prosperity which drives our optimism is a fragile thing, and we should not pretend that our generosity and idealism are unlimited. They are not. We have not perfected human existence, we have a long way to go.

I would like the world to get "bigger" again. The idea of a constantly shrinking planet does not interest me. I don't want everyone to be the same. I don't want to talk to people in China on the telephone. I want Muslims to stay in the Middle East. They shouldn't be coming here. Everyone is better off resisting the call to uniformity and homogeneity.


Is it selfishness, or guilt, that we worship?

Stop the world, I want to get off!

There are days I'm just as glad I'm not that far from getting off the world myself — but not too many. I think we (if by that you mean "we Americans") worship both selfishness and guilt; guilt akin to survivor's remorse, because materially we have it so good in this country — to an extent, of course, because of our willingness to exploit the labor and resources of people less fortunate than ourselves.

As to globalism: humans have wandered and traded for millennia; the only difference in the last couple of centuries is speed. I think global trade and cultural interpenetration can be separated from materialism and exploitation.

What I find striking in the Declaration of Independence is the measured logic and reasonableness of its writers. The Enlightenment was a very optimistic time; I think our worst enemies at present are negativism, pessimism, cynicism, and fear. The Founders would be amazed at our pusillanimity.