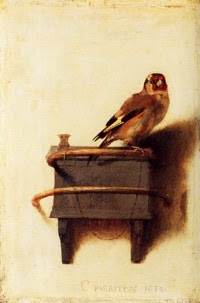 Eastside Road, Feb. 9, 2015—
THIS IS ONE of my very favorite paintings: The Goldfinch, as it's known in English, painted probably in 1654 by the Dutch painter Carel Fabritius. I have written about it here before, but it's on my mind again because I just finished (in the sense of having definitively stopped working on) a short piece of music suggested by the painting. It's called Carel, like the painter, and come to think of it like me, and my father, and my grandfathers…

In fact it was suggested by my friend the painter Patrick McFarlin, who we visited last June in his Santa Fe studio, where we saw a number of canvases he was working on in homage to Fabritius's painting. He calls the series The Goldfinch Variations, and he asked me if I'd like to supply a piece of music to be played in an eventual exhibition of the series — an exhibition projected to include works in similar homage by other painters he knows.

The opening measures of the piece came to mind immediately, but I'm sorry to say they stayed on a back burner for an indecently long time, in spite of occasional polite suggestions from McFarlin. Finally, though, I realized my stumbling block had been the unusual instrumental ensemble the piece seemed to want: and then I simply went ahead and wrote the piece out.

My mother disliked the oboe. Many people do. I suppose many would say four oboes in one place is four oboes too many. But I like the oboe, which I think apposite to a meditation on Fabritius's goldfinch, not only because the oboe can be made to sound like a finch, but also, and more, I think, because its reed looks like Fabritius's finch's wingfeathers.

Those wingfeathers are amazing. The whole canvas, about the size of a sheet of typing paper, is painted illusionistically. There are those who think it was meant to hang, perhaps without a frame, on a plaster wall the color of that forming the background of the painting. Seeing it so displayed would be a real treat: especially when the viewer's eye would be directed closely to that wing, which is not painted illusionistically at all — it's very painterly; the yellow is troweled on, then scratched through with the end of the brush. In a tiny area of a seventeenth-century painting Fabritius looks forward to de Kooning.

Fabritius was born in February 1622 — nearly four hundred years ago! — in a new village, Middelbeemster, in the middle of a new polder, Beemster, the first polder ever reclaimed from a Dutch lake, in the province of North Holland. The province is noted for its seaports (most now cut off from the sea) and its cheeses; Beemster is still a favorite cheese of ours. His father was a painter and a schoolteacher named Pieter Carelsz. — the surname is an abbreviation for "son of Carel," and our painter was probably Carel Pietersz.; no doubt the names Peter and Charles had alternated for generations in the family. He became known as Fabritius, though, because as a youth he worked as a carpenter: fabricius is an old Roman name deriving from fabr-, "make" [things out of wood or stone]. Names were in flux in those days, and you wanted a distinctive one if you wanted to make a mark in the world.

In his early twenties our painter was in Amsterdam, studying in Rembrandt's studio, but by ten years later he'd settled in Delft, where he developed his own quite personal style — whose illusionism would quickly influence Vermeer. It's too bad, though, that he chose to settle in Delft: two years after he joined the Painters' Guild there he was badly maimed in the great Gunpowder Magazine explosion, and died shortly afterward of the wounds. Only nine or ten of his paintings are known to survive to our own time.

Anyhow: I finished the score a couple of days ago. I have in mind four oboists standing in corners of a gallery, perhaps unseen, or in any case not particularly on exhibit themselves. The music is meant to be heard, but not necessarily in silence: it's what Erik Satie calls musique d'ameublement, "furniture music", background music. The oboists may turn their backs to the audience when playing at mp or quieter, and lift the bells of their instruments, facing their listeners, when playing at f or above, if they like.

And if four oboists aren't to be found, why play the piece with flutes, or violins, or maybe even soprano saxophones. But I would like to hear it with oboes.

Labels: How I wrote certain of my music, music, painting