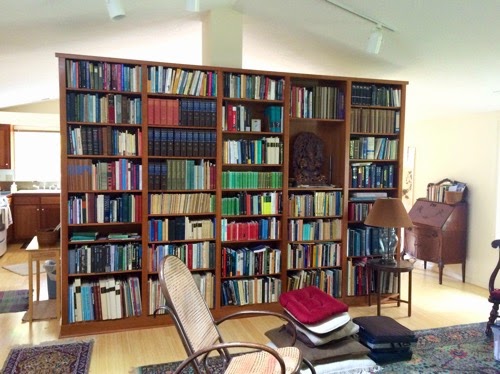 Eastside Road, April 27, 2015—
I returned yesterday from a five-day trip to Oregon, there on a sad assignment: assessing the library of my friend Bhishma Xenotechnites, also known as Douglas Leedy, who died just over a month ago.

A composer, performer, scholar, writer, traveler, and in his last years recluse, Bhishma lived in a pleasant two-bedroom house in the college town Corvallis, to whose Oregon State University he intended his books to be given. I thought it important to have at least a catalog of his collection before it is distributed, and if possible some kind of inventory of its marginalia, because, as I say, Bhishma was among other things a scholar: his reading was extensive, intensive, and careful; and many of his books, I thought, would contain evidence of both the range of his interests and the development, perhaps, of the major themes preoccupying his fine creative mind. I was not prepared for the extent of the assignment: two weeks would hardly have sufficed.

In the meantime, another volunteer, younger, more diligent, and better trained than I, was going through the papers, separating and sorting correspondence, manuscripts, fair copies of completed work, and beginning what promises to be a considerable but clearly organized catalogue of the literary bequest. For that catalogue I prepared the following

Leedy was a dedicated but careful reader with a relatively small library, whose books were generally shelved in rooms in which they were used. The largest number were displayed in the large sitting-room bookcase, five vertical arrays of eight shelves each, two by eight feet: Here were many books of Greek and Latin writers — more of the former — in the Loeb editions as well as others; here too were many books and sections of books he had photocopied, folded and stapled for his own purposes.

Here too is a small but imposing collection of facsimile editions; some of music; others of texts. Reference books include two editions of Grove's Dictionary, the compact edition of the OED, and a number of foreign-language dictionaries.

There are perhaps four feet of musical scores in this room, which had also housed his harpsichord; and a few biographies of composers, Will and Ariel Durant's eleven-volume world history, and some miscellaneous literary works, including six volumes of the Library of America (Thoreau, three volumes of Melville, one each of Mark Twain and Gertrude Stein).

The kitchen contained four two-foot shelves of cookbooks, many of them devoted to Indian cuisine, many others to baking; and another shelf divided between books on gardening and on home maintenance.

In the study were a number of scores, in particular many of choral music, as well as ten or twelve feet of books on various subjects — architecture, mathematics, history, medicine, philosophy, popular philosophy. In the bedroom, perhaps thirty books, apparently mostly recently acquired, on a variety of subjects, many having to do with classical antiquity; and three shelves of videotapes and DVDs, again on a variety of themes, again many related to the Hellenic world.

Many of these books are annotated. There are three usual kinds of annotation, nearly always in very faint pencil, in a very small hand, resisting reproduction. Often there is a kind of index of page numbers on issues of interest, pencilled onto a flyleaf. At other times marginalia are written directly into the book's pages; and often these express either disagreement with or an amplification of a statement the author has made.

At other times, though, slips are inserted between the pages, with more extended comments, or memos to himself. In rare cases such slips bear notes having nothing to do with the book: perhaps his reading was interrupted, he made a quick note and used it as a bookmark. In a number of cases pages are apparently saved with such slips, or with blank bookmarks, or by tucking the flap of the dust-jacket between pages. One can't always be sure the reading was interrupted at those points. A blank slip or bookmark seems often to have been placed in a newly acquired book, presumably against the time it would be wanted. Pages of particular significance to the reader were generally noted in pencil on a flyleaf.

Until some time in the last few years it had been Leedy's habit to inscribe hi name on the cover, inside the front cover, or on a flyleaf. Over the years the form changed from "douglas leedy" to "d.leedy", sometimes with a date but usually not. (Capital letters never appeared in these inscriptions.) Books acquired on travels frequently bear the place of purchase: Bergen; Warsaw; Madras.

Leedy read in English, Spanish, German, French, Italian, Polish, Latin, and (ancient) Greek, but except for facsimile editions and books by Latin and (especially) Greek-writing authors, very nearly all the books are in English. In recent years many seem to have been bought as remainders. It is surprising that the majority of the books appear not to have been read: bindings are tight; dust jackets when present unchipped and bright -- yet in many cases faint pencil annotations appear throughout. 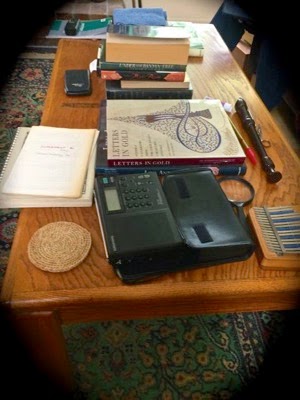 Let me suggest the nature of his interests by noting the contents of the coffee table by his sofa, where I believe he did a fair amount of his reading when not at the worktable in his office. The coffee table was left apparently as it was on March 13 when he left his home for he last time:

Manual for a Scenario scientific calculator.

R.K. Narayan: Under the Banyan Tree & Other Stories. Viking. Flap tucked in at p. 82.

The Metropolitan Museum of Art: Letters in Gold: Ottoman calligraphy from the Sakip Sabanci collection, Istanbul. 1998.

A green pencil; a red crayon-pencil; a glue stick; a fingernail scissors; a tuning fork; a plastic soprano recorder; a tin whistle; a thumb-piano; a round lens on a handle; a small black plastic Grundig radio (YB-305) with case; a transparent plastic 12-inch ruler (also metric); a Scenario calculator (Model SC-110); the remote control for the Heat-N-Glo automatic gas fireplace; a rubber band; three braided-straw coasters.

And, on the floor at the coffee table:

Finally, for the moment, I note the few items on a very short shelf intended for horizontal books, apparently used as a through-the-door depository, and containing items he had with him at the end: 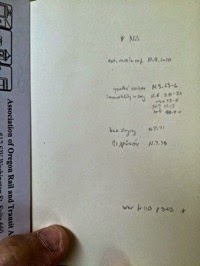 Posted by Charles Shere at 5:16 AM

I often think that private libraries that end up in institutional settings are being sent to the salt mines.

Very few people ever get to see, touch or reference them.

We do want to save material texts. But I wonder whether putting great collections into rare book rooms and archive vaults is really the best place for them.

As a rare book dealer, I can see an argument for returning them to the market-place, where they may find their new custodians.

I remember, when going to the University of Kansas at Lawrence, to photocopy their Eigner archive, being taken down into the basement to see their Mencken collection, a big four bay section of shelves containing all his first editions, as well as a nice big file of original Baltimore Sun bound volumes (with many of his columns). No one EVER got to see these books, as they were not circulating. What purpose, I thought to myself, could it serve to have these wonderful books sitting in the semi-dark of the basement, gathering dust, while the world outside went on about its business, oblivious to its existence here?

Another lovely reflection - it feels very emotional and private as I read it, and I guess the best I can say is what a good friend you are to offer such detailed insights into his life. Safe travels.