A month in Italy: arrival in Naples 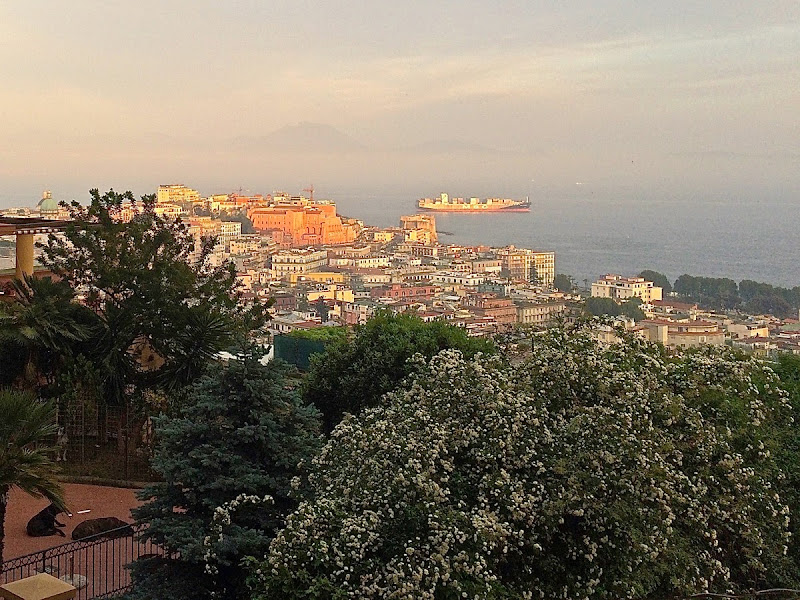 Corso Vittorio Emanuele, May 7, 2015—
A month in Italy 1: Arrival in Naples IT WAS A LONG flight, and tiring. Nearly eighty, we don’t do this as easily as we once did. Older, slower, and stupider: let me begin by cataloguing the mistakes:

First, we got the departure time of our bus to the San Francisco airport wrong by fifteen minutes, and arrived at the terminal to watch the bus depart. Thankfully our neighbor down the hill is a good sport. She immediately followed the bus onto the highway, drove past its next stop to give us time to get ahead of it, and set us down the next stop down the road — an extra 25 or 30 miles for her, and an extra forty minutes, but a game-saver for us.

Then, when we finally boarded our plane, we took the wrong seats, as a very polite German fellow pointed out. We should have taken the row ahead. Oh well, I suggested, we’re already settled; wouldn’t you like simply to exchange seats? But no, they would not; it was a question of the names attached to the seats. Well, I suggested, we could exchange names as well. Mine is Charles; what is yours? Florian, the fellow said, a bit confused. A nice name, I responded; I can imagine you mightn’t want to exchange. So up and moved, and resettled everything.

The flight was long and straightforward. Lufthansa’s Airbuses have good in-flight entertainment, but I chose only a Mozart album to listen to before dinner. What a performance! I’ve since downloaded it to hear it again: the young Norwegian violinist Vilde Frang playing the first and fifth concerti and, with the Ukrainian violist Maxim Rysanovk, the Sinfonia Concertante. I have rarely been so moved — perhaps the surroundings contributed, but a second and third hearing confirm what I felt in the airplane: delicacy, restraint, pacing, intonation, everything was just what you’d want. Silences and thoughtfulness in the slow movement; short notes throughout; very little vibrato. Marvelous.

Arrived in the unfriendly architecture of the unfortunately named MUC, the Munich airport, we found our way through mazes partitioned with glass walls sometimes functioning as mirrors, at other times revealing equally frustrated and confused travelers in the hall we need to be in but cannot reach for lack of doorways. Passport control. Yet another security check, and this time I cannot untie my iPhone case from my beltloop. If I only had my pocketknife, I point out to the security guy, I could cut it; but of course you will not let me carry my pocketknife, so I can’t. With good Bavarian humor he chuckled and bent to untie the knot, while I stood old, slow, and stupid, like an aging horse being unharnessed for perhaps the final time.

On the airplane finally we again of course sat in the wrong row. This time names and such no longer seemed to matter: we were with Italians, not Germans; and not only Italians, but southern Italians, and good humor and resignation prevailed. As did the generous Lufthansa alcohol policy: free and repeated.

Then there was the taxi situation in Naples. Our plane landed on time, but our checked bags were the last off the airplane, and by the time we got outside there was a long line at the taxi rank. Cabs came and went with remarkable efficiency at first, but as we drew nearer the head of the line there were fewer taxis. One tried to cut into the line by driving wrong way through the gate, and a delicious Neapolitan argument broke out. The Italian word is imbroglio, and it is often useful.

We’d been warned not to ride with a driver who forgets there is a standard fare to our quarter, Chiaia: twenty-three euros. Doesn’t apply with this consideration and another, our driver said in loud and quick Italian, mentioning baggage, distances, the time of night (it was nearly midnight), and other matters far too complex for my flagging interest. Thirty-five euros, he said, not twenty-three; it’s thirty-five euros now to Chiaia.

Can’t be, I said pointedly, it’s twenty-three. No, he said: thirty-five. Well, thirty. I countered with twenty-five, and we settled at twenty-eight. In the end, of course, I gave him a twenty and two fives, and got no change. But what can you do? I asked his name: Rosario.

WE LIKE OUR APARTMENT. We chose it for its location: not in the historical center, but close enough by public transportation, or, when we’re up to it, a twenty-minute walk. Sticking our head out the bedroom window reveals a fine view of Vesuvius across the bay, as you see above. It’s quiet, except for an occasional barking dog or a worker hammering at a stucco wall. I’ve found, on many Italian sojourns, that stucco walls seem to need a considerable amount of percussive adjustment. But here in Naples, so far at least, this work seems sporadic, even laconic, and I think they’ve already forgotten about the whole thing.

We have a fine big sitting room serving also as our dining room; a fine big bedroom with its closet, and between them a fully equipped kitchen and a small but perfectly suitable bathroom: all this at the price of a cheap hotel downtown. The two large rooms are roughly cubical, ten feet or so on a side; and they are light and airy, though there are windows only on one wall, facing south.

The apartment is carved out of one side of the second of perhaps five floors in the building, which is one of a number of early 20th-century palazzi on a private driveway, whose gate to the Corso Vittorio Emanuele is watched by a watchman, what else, in his little office. We’re high above the street — uncharacteristically, I forgot to count the steps when I walked down to the street this morning. A couple of hundred, I imagine. Fortunately there are elevators: one through the six storeys of the building in front of us, another in our own building.

A hundred steps or so from our cancello, the gate onto Corso Vittorio Emanuele, you come to one of the Naples funiculars which, for a euro, takes you up to the top of our hill — the oddly named Vomero (the word probably derives from the Italian word for “ploughshare”) — or down to the bottom taking you to the Piazza Amadeo. That’s about all I can tell you now; we spent most of the day settling it and sleeping. Well, eating, too, of course; and I’ve already posted the day’s meals to the other blog. The pizza was really quite delicious, and we managed a nice little supper back home. But it’s been a long day, and that’s it for now…
Posted by Charles Shere at 2:39 PM