PERHAPS YOU'D LIKE to hear the third movement of my Ballet: Handler of Gravity. If so, click here. It's only eleven seconds long. 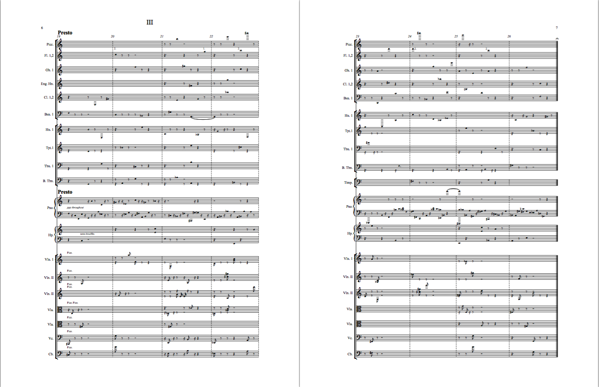 Handler of Gravity was composed in 1971 as the centerpiece of a concert of instrumental music from an opera, then in progress, based on Marcel Duchamp’s painting La Mariée mise à nu par ses célibataires, même (usually translated as The Bride Stripped Bare by Her Bachelors, Even). Duchamp provided his painting with an extensive “commentary” in the form of notes, sketches and memos; and Handler of Gravity is based on one of these.

The “handler” was to influence the Bride’s decisions by responding to changes in a sort of gravitational field ó the details are unclear, and in any case the handler was ultimately left out of the painting. Duchamp’s note is accompanied by a sketch of a six-pointed star-shape surrounding a spheroid body; the six points represent points from which threads would stretch toward the central body, defining its location and shape by their tension. 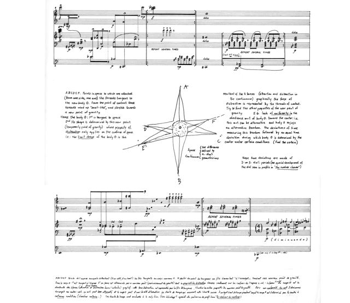 Six systems of music, each but the third lasting about a minute, were conceived as both linear and textural analogues of these threads. The unsynchronized repetitions and reinforcements in the music was meant to represent the variations and displacements of physical bodies caused by gravitational disturbances.

Much of this was suggested by the curious rhythmic disturbances which frequently characterize organists — or, rather, their performances. The result is a rather different kind of organ writing, a sort of compromise between standard notation and a kind of tablature; the hope is to ensure an idiomatic organ character by harnessing the little clumsinesses of the instrument.

The score was written on 10 March 1971 for a concert given three days later, when it was given its premiere by Ted Ashford, organ, with David Smith, chimes and glockenspiel, in a performance superimposed on other music associated with the opera: Screen, En balançant, and Vie lactée for string quartet and Bachelor Apparatus for brass quartet; 13 March 1971; Mills College Chapel, Oakland California. The second of the three pages is reproduced here.

I LIKED THE MUSIC so much I set it in three other versions:

•Five Pieces after Handler of Gravity, for solo piano (premiere: Nathan Schwartz; Jan. 17 1976, Oakland Museum). Each of these pieces was provisionally dedicated to one or another of the five music critics on the three major daily newspapers in the San Francisco area at the time, since Duchamp sometimes referred to his Handler as a “Juggler of Gravity.”
score: FP she03, 12 pp., available from Frog Peak Music

•Ballet: Handler of Gravity, for full orchestra (3-2(eh)-2-2(cbn)/4-2-3-1/pno/hrp/1perc/timp/strings) (premiere: Shere, Contra Costa Symphony, Kensington, Calif., 28 Oct. 1976, as part of a compilation provisionally called Music for Orchestra). This version also stands at the end of the second act of the full-length opera The Bride Stripped Bare by Her Bachelors, Even. It is the version whose third movement is shown above, and can be heard here.
score: Ear Press, 14 pp.,available from Frog Peak Music

Posted by Charles Shere at 7:53 AM

What are the metaphorical/metaphysical implications of Duchamp's treatment of the mating game circa 1915?

How does your music "interpret" your version of the meaning of that work (The Large Glass?