Back to the blog — via books… 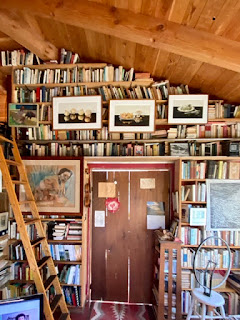 Perhaps stay-in-place will revive the blog, which declined, in some cases died, in the last couple of years — perhaps the victim of increased Facebook activity largely attributable to the distractions of these Trump years.

Let's give it a try with a few paragraphs on reading. These strange epidemic times interfere even with that. The volume of correspondence is much increased — no complaint there; I love reading and writing letters, but it takes time. (Correspondence so far this year, sent and received, runs to nearly 70,000 words, just among friends and family!)

I just read Donald Hall’s A Carnival of Losses, sent me by a friend. Hall was poetry editor of The Paris Review; he died two years ago, nearly ninety years old; this book was his last, a collection of light first-person anecdotes and memories of interactions with poets he had known. I found Hall a little too self-congratulatory, though perhaps at his age and after his accomplishments that can be excused.

Until now I would have logged the successful reading of the book at the website Goodreads, and perhaps left a short “review” there. I recently learned, though, that Goodreads is yet another Amazon property, and I’ve decided to spurn it. This is unfortunate as a number of my children and grandchildren use it, and it’s pleasant to read their comments there — and to keep track of their literary interests. But I will return to LibraryThing, where I note two anodyne reader reviews of A Carnival of Losses: I should add one of my own, I suppose.

I am nearly done with the first volume of Virginia Woolf’s collection of essays, most of them reviews, in The Common Reader, first series. I bought the book over sixty years ago, as I can tell by the style of my signature on the flyleaf. It’s a Harcourt Brace Harvest edition, paperback, published in 1953; it has held up remarkably well. I don’t remember if I read it previously; I think not. Here Librarything offers six reader reviews, and several of them are quite worth looking at. I liked, for example,

The common reader is decidedly not a book to read without the mind and without the heart — both of those organs will be stimulated more than adequately as you read it — but the considerable enjoyment is still there all the same!

What’s next? I’m stalled in Richard Jeffries’s The Story of My Heart and Marcus Aurelius’s Meditations, in both cases partly because I’ve been reading them as e-books, on my iPhone. A friend has just sent Robert Macfarlane’s The Old Ways: A Journey on Foot (Landscapes) with a glowing recommendation, and another is apparently sending me Roy Morris’s Gertrude Stein Has Arrived for which I will no doubt drop everything else temporarily. (And no doubt that will drive me back to Stein’s Everybody’s Autobiography.) When the weather's warmer I plan to resume and finish Proust, and I've been hearing a call from Beckett lately, his great trilogy.

In pre-internet days reading a book like The Common Reader was slowed by trips to the encyclopedia. One wants to know more about the Mitfords, the Elizabethans, the Greeks. Wikipedia is quicker to consult, of course, but ends taking up more time, because its distractions are equally quicker. I find it more difficult to write, these days; the future is so vague it seems futile to leave yet more words scattered about. But how I appreciate those left by earlier writers; how gratifying their conversations are now we can't conduct our own with old friends and youngsters!

Posted by Charles Shere at 2:27 PM