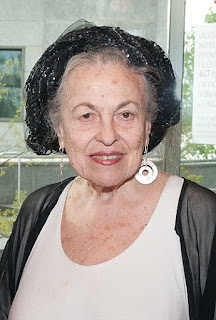 Eastside Road, April 13, 2020
I DIDN’T KNOW Helene Aylon well, but I considered her a friend. I first met her in 1975 or ’76, I think. I was working for the Oakland Tribune as the art critic, and saw an exhibition of her recent works on paper, a series called “Paintings That Change,” in which she applied oil along the top (usually, as I recall) of the paper — in time the oil moved slowly across the paper, constantly but slowly changing the painting’s appearance.

I was impressed by the chance beauty of the results, and by the egoless attitude of the artist, who was content to let the medium make the image.

Late in the 1970s she began a new series, “The Breakings,” similarly chance-determined but clearly feminist: she poured linseed oil onto plexiglas panels, let it form a thick skin, then tilted the panels to form a sac containing the oil. At a certain point the sac would break, allowing oil to move across the panel. The results were strong, formal, yet emotional.

In the 1980s Helene turned toward a more conceptual approach, to an area even larger than feminism: pacifism. This began with an ambitious project: she gathered dirt from nuclear bases, mines, and reactors, stuffing it into pillowcases and deploying them in demonstrations at, for example, the United Nations headquarters. This project grew into an international activity, gathering dirt and other material from many sites, often incorporating material from interviews with women living in troubled areas.

I never though of Helene, in those days, as having a settled residence — she would appear one day, seemingly en route from Palestine to Japan, with documentation of projects involving sacks, dirt, narratives. She was always earnest, caring, patient; she seemed resigned to the continual human tragedy.

At one point, probably in the 1980s, Helene asked me to appear in her defense in a court trial. Sacks of dirt she had taken from various sites had been damaged in storage: the facility’s roof had leaked, the sacks had rotted; the various earth samples, meticulously gathered, documented, and stored, had run together. The storage company was pressing her for unpaid fees; she was refusing to pay and asking damages, I think, for the ruined work.

The trial hinged on one question: was her work art, or was her material simply ordinary dirt. I was asked to testify that she was an artist and that her work was significant. On the day of my appearance I was alarmed. The jury looked utterly uninterested in the proceedings. I listened to Peter Selz’s testimony for the storage unit: Helene was a minor, marginal figure, he said, in a complex galaxy of conceptual and process-oriented artists. The dirt was simply dirt. Much of his testimony was on videotape for some reason and during its presentation I saw that the judge was actually sleeping, members of the jury bored and restless.

My testimony was limited to answers to direct questions from the attorneys for the two sides, and it was apparently insufficient. I finished and was dismissed. Soon enough the jury returned its verdict — against Helene.

She seemed resigned, but in a way I thought her defeat confirmed the justice of her attempt. There is a quiet, Sisyphean heroism to such work. Helene persisted, turning in later decades to work even more ambitious, even more futile to my view: removing paternalism and male supremacy from orthodox Judaism.

In 1996 I spent a week or so in New York City, and she offered me her studio apartment in Westbeth. I spent almost no time with her then; she was away on one of her frequent trips. But another trip a few years later brought her to San Francisco for an exhibition at the Contemporary Jewish Museum, as I recall, and we met briefly on that occasion. She was warm, curious about my own doings, expressive. She always had a soft power, the sympathy of human concern attached to the strength of enduring persistence.

Helene was not a distancer. She died of complications of Covid-19 on April 6th, in New York City. She was eighty-nine years old.

Charles, this is a beautiful evocation of Helène, her warmth & her quiet determination to make the world better. That she did this through such a variety of forms & embodiments—from oil stains on flat surfaces to rocks exchanged in pillowcases over barrier walls in Israel/Palestine to pink highlighting on vellum to expose the flaws of sacred texts—reveals the depth of her reflection and the range of her practice, always informed by this moral conviction. Thanks for this beautiful piece.

Charles, thanks again for this perceptive appreciation of Helène—her personality and her work. There will be a memorial for her this Sunday, as per her wishes. If you'd like the details, message me on Facebook.
Best,
Peter Samis