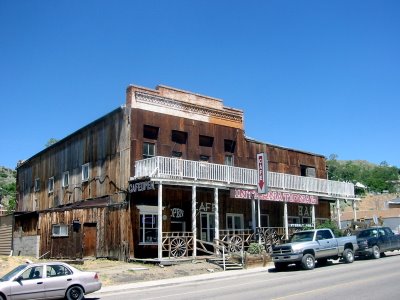 THE CALIFORNIA MISSIONS, as I understand it, were built a day's journey apart -- a day by foot and mule, of course. The towns on Highway 50, you'd think to look at the map, were similarly distributed -- a day by jalopy, not mule. You'd also think that modern automobiles would make the trip faster, and they do. But it's still a long way between them.

Until fairly recently even the automobile club was advising against this trip except for travelers with "strong survival skills." Until thirty years ago we wouldn't have attempted it without a toolbox in the trunk, a spare set of hoses and belts, and five gallons of water. Today, so complacent and credible have we become, our only preparation is to fill the tank; and even that isn't so terribly necessary: one tank will get us across Nevada and halfway across Utah!

In truth it's probably just as well there are so few towns along this road: they take a distant second to the open spaces between them, in my opinion. The Intelligent Designer has arranged things with a better eye, if perhaps a less obvious sense of humor. But the aesthetic and philosophical rewards of Landscape aren't enough for the questing human mind and spirit: one wants as well food and drink and repose, and the occasional bit of society.

We'd planned to spend the night in Ely, I don't know why -- roughly a comfortable day's drive across Nevada -- but a couple of phone calls revealed there was a convention in town, and a movie being shot on the outskirts, and not a room to be had. So we stopped the next town short, in Eureka. While in Reno I'd researched this a bit, gullibly, in the easy way Internet blogs offer: Man in a Suitcase had made this exact trip recently, though east to west, and had offered his own recommendations, with enticing photos.

If you're curious about Austin or Ely I'll refer you to him, and his comments on Eureka are interesting as well. But just how recently did he make this trip, anyway? The "gourmet meal at the Jackson House's restaurant" hasn't been available for years, the girl at the visitor's center told us; the place has been desperately for lease. We'd checked into the Best Western, where the only room sleeping four was a hundred-dollar suite, well beyond our normal limit, so we had little choice as to dinner: we were eating in Eureka.

I don't recall the dinner, so it can't have been too bad.

Next day we drove across the desert to Ely, where we found hundreds of motels, nearly all with vacancy signs lit up. Well, these days we reserve motel rooms from the AAA guide, so we miss all those little mom and pop motels, the twentynine dollar ones that look quaint and clean and nostalgic when we drive by, next day.

On across the imperceptible state boundary into Utah and the town of Delta, where we find a Radio Shack franchise. Maybe they'll have an adaptor for my laptop! I left the power unit back in Reno, of course, the one I bought in Glendale when I forgot to pack one for that trip, a couple of months ago... The Reno motel said, when I called, that it hadn't turned up, and I regretted the tip left for the housemaid, but chalked it up to the increasing carelessness and forgetfulness that comes with one's seventies.

Well, of course, there isn't an adaptor for the low-wattage adaptor in our car, used for the cell phone and the handheld. No matter: when we get to Santa Fe I'll be able to borrow one, and I've ordered yet another to be sent on to Albuquerque. I can get along a couple of days without a computer -- but that's why this is being written three days late and the memory fading...
Posted by Charles Shere at 9:48 AM