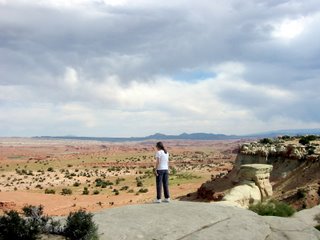 
THE COUNTRY CHANGES once you leave Delta, Utah, driving east on Highway 50 -- "the loneliest road in the country." West of Delta, after you've crossed into Utah from the mining country of central Nevada, the landscape had softened into farm country: alfalfa, some truck farming, maybe a few orchards. Delta would be a provincial capital in another country; in the USA it's just another county seat bisected by Highway 50, serving for twenty minutes or so as Main Street, impossibly wide.

Then it's back for a short time to farm country and then the red rock begins. I'd only seen southern Utah before -- Cedar Breaks, Zion, Capitol Reef. Central Utah shows the origin of those amazing formations. Here the flat country begins at the same time to solidify and to break down. From the automobile, at nearing eighty miles an hour, grain gives way to mass. It's no longer sand, pebbles, rocks, brush, bush; it's simply red rock, white clouds, blue sky: American colors. (Yes: and Dutch, and French, and...)

From time to time the highway finds a long grade, cutting through the rock, and the geological history reveals itself: layers of white stone, grey, red again, layers put down by various forces I suppose, in eras dominated by different pollutants -- volcanos? shellfish? forest? And at the new level, lower, you get out of the car at a viewpoint on the bluff overlooking the coast, and look out over a vast ancient seabed.

The kids run off exploring and climbing where they dare, and you contemplate time and space so extensive, marked by change so incredibly slow, that you cannot reason it; you can only meditate on it -- rather, you must contemplate rather than reason. You know the general principles of geological change; you have an idea of the geological pace; but you have no way of relating it to your own life experience, not even after seventy years.

There's none of Christopher Alexander's "half-inch trim" here. Everything that is not human -- your kids, your car, the road it drives -- is more than monumentally huge. Monuments are made to human purpose: this landscape has no human concern whatever. To think of it in any human terms is to be either insufferably arrogant or insufferably sentimental.

This realization is so striking it's been expressed over and over. I remember being seized forty years ago by the insights in Ross Parmenter's The Awakened Eye, recording his own enlightenment, by desert contemplation, beyond the human concerns of his previous years as a journalist. I apologize for repeating his discoveries here, badly, in brief and not persuasively: but the experience, like the landscape that inspires it, cannot finally be expressed verbally: one has to absorb it on site, at one's own pace.

We descend through an amazing cut in this seabed to arrive in one lower yet, though the distant horizon still looks like the end of the world, another final drop-off into who knows what. The nearer horizon is threatening toward evening, and as we approach this evening's motel we drive through a dust-storm. Ah: this is what has carved those caves and arches, what has worn away the soft earth to reveal the hard bones within it.

The road drops a bit more, to a live river, the first water we've seen in this landscape, other than a few absurdly transitional irrigation projects, in a day of driving. The Green River, which rises, I believe, in Wyoming, flows through Utah into Lake Powell, and is joined by the Colorado, a relatively minor tributary which nonetheless takes over naming rights to the Grand Canyon and the now pathetic conclusion, sapped by irrigation projects, hardly surviving to its eventual outflow in the Sea of Cortez.

At Green River we check into a motel whose pool, of course, is not working; then set out for one of the many fine restaurants the motelkeeper had mentioned when I telephoned for the reservation. There are three: a fast-food franchise; a Tex-Mex bar; the "family restaurant" Tamarisk. We choose the last, and are rewarded with nothing memorable.
Posted by Charles Shere at 10:47 AM