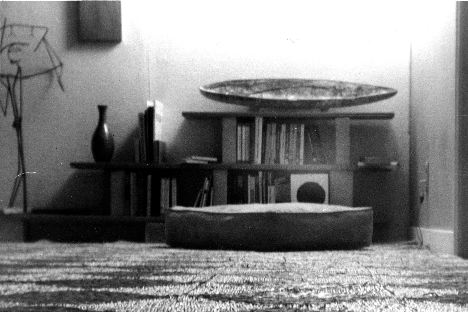 from left to right: “the Etruscan Warrior,” a welded-steel-rod sculpture by Mel Strawn (I believe) bought from Contemporary Arts in Berkeley. We still have it, sitting on the garden wall outside our bedroom. A coral-colored stoneware bottle from David ____, a handsome, bearded, middle-aged potter who had a well-known studio in Larkspur, where there used to be a brick factory and is now a shoppingmall. The “fish dish,” also from Contemporary Arts, and still resident on a top shelf in our pantry. In it I had carried a loaf of French bread, split, rubbed with garlic, spread with butter, coated with grated cheddar cheese, and toasted under the broiler, when I went to dinner at Gaye Notley’s apartment in Berkeley a couple of years earlier, and met there her roommate Lindsey Remolif. I can’t read the book titles from here, which is too bad; I’d like to know what they are.

Three planks; five concrete blocks. On the bottom shelf a white speaker cabinet I made to house a loudspeaker salvaged, I think, from an automobile radio. At the center of the speaker cone, to serve as a high-frequency diffuser, I glued a half-eggshell carefully cut with embroidery scissors from a hard-boiled egg. On the wall hangs Lorraine Crawford’s oil painting of an abstracted standing figure on a blue ground. On those rush squares, on the floor, a corduroy-covered cushion, orange as I recall, no doubt made by Lindsey. The scene is lit from above by a hanging lamp I made of two plywood discs and a sheet of splotched fiberglass, with an ordinary light bulb hanging from a length of zip cord plugged into the wall, right. It was our second home.

Posted by Charles Shere at 7:34 PM