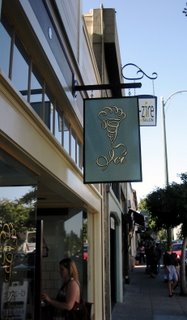 AMONG OUR FAVORITE PEOPLE are Paul and Mary Canales. Paul's the chef at Oliveto Restaurant in Oakland; Mary -- until a few months ago one of the pastry chefs at Chez Panisse -- is a co-owner and the muse, I would say, of Ici, an ice-cream shop that opened a week ago on College Avenue, in Berkeley's Elmwood District, just north of Ashby Avenue.

We stopped in at Ici yesterday, after a drive up from Los Angeles, arriving in Berkeley a little after five in the afternoon and definitely ready for some ice cream. And what wonderful ice cream it is! I had an affogato, only recently rather an exotic item but now becoming commonplace -- a cup of espresso surrounding a scoop of vanilla ice cream.

That sounds prosaic. But at Ici the coffee is from Blue Bottle, and the ice cream, like all the ice creams here, is fresh from a machine a dozen steps away from the display case, with its shelves of bombes and ice-cream sandwiches and fruit displays... 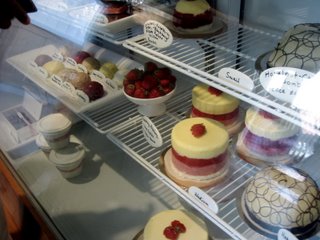 ...and in its own room off the immaculate and roomy kitchen, where the shop's own waffle cones come off the griddle.

The first thing that struck me, even before tasting anything, was the Chez Panisseness of the flavors. After all, I have a long acquaintance with these ice creams; I remember Lindsey working out a number of them, back when she used a wooden-tub White Mountain freezer to make them for the restaurant. Now here they are in a shop, just as enticing as when she made them thirty years ago and more. 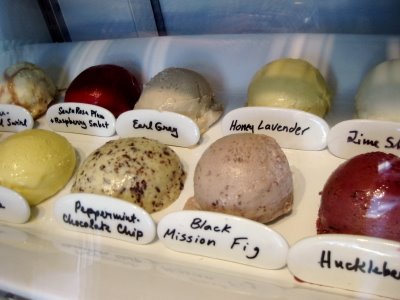 The shop's already attracted notice on a number of blogs, as Google will quickly reveal. Some people have referred to a feminine quality of its decor: I don't understand that at all. The interior is styish, even elegant, with panelling of recyled elm -- this is the Elmwood, after all -- and well-chosen typefaces for the placards announcing the flavors of the day, each hanging by a ribbon from the wall.

Berkeley's College Avenue has a fine tradition of ice cream, reaching back to Bott's, long gone and until now still lamented. Mary's ice cream, organic of course, subtle and authentic, is generations beyond Bott's. We've come a long way. And for all its subtlety, its artisinal authenticity, it seems definitely to have its audience. The place was packed when we visited it, and I can't imagine we'll ever be in the neighborhood without dropping in.

And my ice cream? Exactly the right consistency, weight, degree of sweetness. It could have been Lindsey's. And I'd have thought so even if I hadn't known the thoughtful, experienced, serious, personable, dear friend who'd made it.
Posted by Charles Shere at 11:28 PM