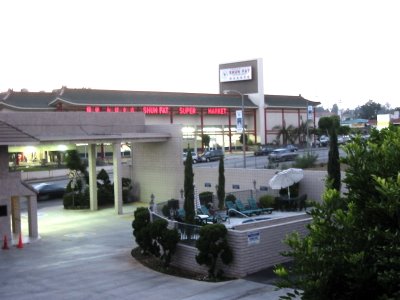 We were at a rest stop, the third I think, on the way down Highway 5, and I was addressing a slim, rather elegant young woman with a short upswept reddish hairdo and, on a long leash, an equally elegant blue-haired terrier.

Un petit peu, she replied with a smile, do you speak french?

Qu'un petit peu, I apologized; it's that my wife pointed you out and said she had seen you at each of the rest stops, and she thought you were french, and I asked how on earth she could tell, and she said She looks french, so I thought I'd ask.

I'm very flattered, she said, but no, maybe a very little bit somewhere way back; we're just driving south to see my parents, and we break the trip often...

As one will, I said with quick gallantry, when traveling with livestock.

Yes, she said, but then we like to break the trip, too.

And now we're in a Best Western across the street from Shun Fat. I haven't explored Shun Fat yet, and am not likely so to do: there are too many other things to be done down here. We're here for a conference, and I don't have anything yet to say about that, and perhaps never will. But we are also here to eat, of course, and to see a play -- Racine's Phaedra, which I am greatly looking forward to.

But that's tomorrow. Today we drove 440 miles, a dozen of the last through dense smoke -- dramatic flames burning on mountainsides beyond Pyramid Lake, to the north of Los Angeles, dramatic as any coup de theatre Racine might ever have wanted. And then, after checking in, a quick drive to Trader Joe's on the way to dinner.

Why? Because our destination, Bistro K in South Pasadena, may be a bistro, but it serves no wine. You have to bring a bottle.

My wine-merchant friends (not to mention our winemaker friends) will be shocked to hear that we know Trader Joe's list pretty well. Our everyday wine used to be our own naive domestic Zinfandel, one of our own manufacture, but that was years ago; now much of it comes from Italy or, occasionally, Spain, by way of Trader Joe. And we make it a point of honor not to pay more than five bucks a bottle.

Well, you don't take a bottle of cheap wine to a restaurant, at least I don't. So tonight we splurged with a Pommard '04 from Sebastien Roux. It tasted pretty austere at first, I thought, but married well to the soft cheese that came as an amuse-guele, not to mention the hanger steak that came afterward.

Bistro K has an amusing menu which you can see by looking the restaurant up at Zagat.com. Sea urchins, monkfish osso buco, beef cheeks, lamb's hearts, things like that. Even something as straightforward as a Caesar salad is tricked out -- it's served rolled up in a flour tortilla. Don't ask me why.

But buried there at the end of a long long list of dishes each of which seemed to contain within itself enough different ingredients to supply the index of a fair-sized book of nouvelle cuisine californienne, buried there at the end was the hanger steak. It came with mashed potatoes, a couple of roasted garlic cloves atop, and a serving of mixed vegetables: peeled asparagus, carrot, chanterelle, leek, peas. Quite delicious. 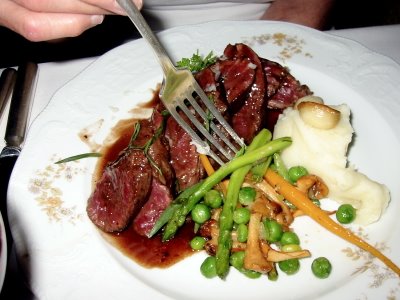 Bistro K is at the corner of Fremont and El Centro in South Pasadena, in a building called, of course, Fremont Center Theater; a building that used to be a funeral parlor; a building it shares with a small theater where, last May, we saw a number of one-acts by Ray Bradbury, of all people. Everything here is a little bit weird. It's Los Angeles.
Posted by Charles Shere at 11:09 PM