I THINK I'VE MENTIONED it before, but in case you weren't paying attention, this is how it's done:

Buy equal parts of red (hard) wheat, white (soft) wheat, oats, and rye — all in the kernel, not rolled or chopped into groats. Mix them all together.

I use the same pan every day, and don't measure anything. Water up to the rivets. Then pour in the grain: I use a little scoop, and pour it into a heap, just enough so the top of the heap breaks through the surface of the water. Add a handful of raisins.

Bring the water to a rolling boil, put a lid on the pot, and let it sit overnight. Do this just before going to bed. It takes about five minutes.

Next morning, uncover the pot and bring the cereal back to a boil. Then turn off the heat and toss in a couple or three tablespoons of oat bran, stirring it well in afterward to be sure it doesn't clump up unpleasantly. Put the cover back on and let it stand. 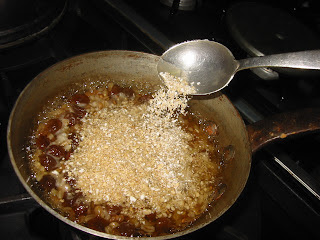 Some of us like to sprinkle a bit of sugar on the cereal, perhaps brown sugar; others like it just as is, with of course a little milk. Either way it's very cheap — the wheat costs about fifty cents a pound, even organic; the oats maybe three times that — and a bowl of this cereal will keep you going all day, or certainly to lunchtime.

Oh: the name. When I made this for Pavel it was just the time that a thousand-year-old body was found in a Danish bog, with some wheat kernels still in his mummified stomach. Bog-man cereal, Pavel called it. 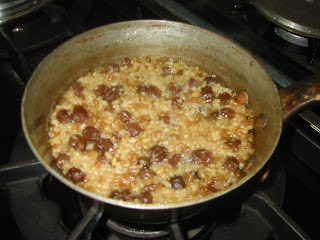