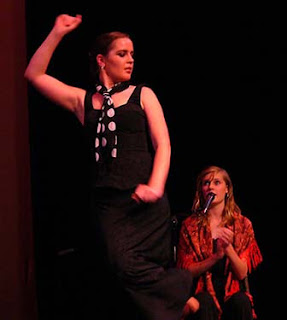 SEVENTY-TWO HOURS, more or less, over the weekend, sort of a typical jam-up for us — the jam-ups alternate, thankfully, with more tranquil times here on Eastside Road.

Saturday morning down to Berkeley, there to have lunch at Eccolo with an old friend, John R., recently retired from a distinguished career in journalism, thinking of a solid book on Die Zauberflöte, wondering how to arrange a more leisured life. Not a difficult matter, say I.

Saturday evening a quick supper at Zax in Berkeley, and then to San Francisco to see Lou Harrison's opera Young Caesar in the premiere production of its apparently final form — more masque, I think, than opera, but affecting and often quite beautiful.

Sunday morning to a screening of a friend's video Eat at Bill's, a winning, laid-back, fond documentary on Bill Fujimoto and his (Berkeley) Monterey Market, surely a unique institution dedicated to the small farmer, the demanding restaurant, and the canny shopper.

Then back upcountry to Sebastopol to see a second performance of that flamenco program, and finally to eat at the French Garden.

FLAMENCO FIRST. I don't pretend to know anything at all about flamenco; I only know that I am agitated and impressed by its performance, especially when done as well as this, especially when done by my own granddaughters. Eve, 23, has been dancing more than half her life. I have seen her balance on the heel of one foot for five minutes, tapping the toe of that foot with unbelievable force and rapidity, and then switch to the other foot for another five minutes, and continue for several such alternations — this at her school in Seville, in an exercise class that would land its instructor in prison in any country concerned about the health of its youngsters, it seems to me.

Flamenco requires that kind of discipline and focus, of course, and the skillful technique that may come of such training. But it requires more, and this is where Eve has evolved from a dedicated student to an expressive artist. She danced her own choreography on this program, alternating power and grace. To call attention to any one of her graces risks minimizing others: but the power of her percussive feet; the precise grace of her hands and arms; and her supple but muscular spine seem to me to be particularly remarkable.

Her sister Emma, 16, has been singing for years — I remember her parroting the Queen of the Night's aria "Der Hölle Rache kocht in meinem Herzen" when she was only five or six years old, her voice carrying across the field as she walked back home from our house. She's been studying the flamenco style for six or eight years, and her voice has moved from the Queen of the Night's stratosphere toward Tamino's tenor. What particularly impresses me at the moment are two things: her long long breath, which can support amazingly long phrases; and her ear for microtonal inflections.

They're both off to Jerez and Seville in a couple of days, Eve for a number of months, Emma for only two weeks. I'm sure there'll be more Flamenco Nights this fall: if so I'll keep you posted.


ECCOLO: well, a perfectly delicious Eggs Benedict, rich and pointed with delicious egg, a bit of tang from lemon in the Bearnaise, first-rate bacon. If I were younger I wouldn't mind eating this every morning.

ZAX: a strange meal, I suppose, but those eggs Benedict had given me all the protein I needed,Since we were about to see an opera about the adolescent Caesar, the Zax version of his salad seemed appropriate: everything's there but the raw egg. With it, a side order of Swiss chard. Gotta have your leafy greens!

LOU HARRISON WROTE Young Caesar first in 1971, in a version for puppets, singers, and gamelan, which we saw that year at the Cabrillo Festival. In 1988 we saw a greatly revised version performed by the Portland Gay Men's Chorus, for whom Lou composed a number of strongly affecting choruses; the orchestration was also considerably changed, transfered to conventional Western instruments; and singing actors had replaced the puppets.

This so impressed John Rockwell, at the time the director of the New York Festival, that he asked Lou for yet another revision for a performance to mark his 85th birthday in 2002. In the event the production was not achieved, so last weekend's performances were the premiere of this latest version — the final one, since Lou died in 2003.

I wish he'd had the chance to workshop the piece a bit more, though I can imagine he was heartily tired of dealing with it, special as it was to him. The subject is close to everything Lou loved: the young, unsophisticated Caesar, a product of a rigid but hypocritical Roman (read European) upbringing, meets King Nicomedes of Bithynia, an experienced, sensuous, subtle Asian. Well, Asia Minor: but still Asia.

I spent a year or two, fifteen or twenty years ago, writing a biography of Lou — yet to be published; perhaps never to be published. I was and am fascinated by The Making Of Lou, which is analogous I suppose to Act I of Young Caesar: Lou grows up on the West Coast, develops his chops, studies with Schoenberg, performs with dance companies, meets music of all sorts. Lou Harrison: The Second Act did not interest me, so I never wrote that part of the biography, the part coming after his fiftieth birthday, his marriage to Bill Colvig, his turn toward composing almost exclusively for gamelan. I love and enjoy the mind of Lou; I don't understand and am not interested in his sensuality. My shortcoming: I freely confess it.

But the intellectual component of Lou's music, nearly all of it, and certainly including Young Caesar, is as rewarding as almost anyone's. In a curious way he's an American Anton Webern: his gestures are bigger and his "playground," to use his own term, vaster: but there's the same precise marriage of intricately intelligent and effortlessly lovely composition in both of them.

The premiere was produced by the Ensemble Parallèle, with tenor Eleazar Rodriguez perfectly capturing the title role, baritone Eugene Brancoveanu strong and winning as Nicomedes, and John Duykers at the peak of his powers in the important role of the Narrator — a sort of Harrisonian version of Mozart-Da Ponte's Don Alfonso.

Wendy Hillhouse was a fine Aunt Julia; Sheila Willey did well in the small role of Caesar's wife Cornelia; and the fairly large number of much lesser roles was consistently and even memorably performed.

Dance was central to the production, and Lawrence Pech and Peter Brandenhoff were amazingly successful at conveying love, lust, and lyricism without looking merely silly — as could easily have happened. Pech choreographed the action, working with Brian Staufenbiel's stage direction.

I'd like to see the production again. Lou's music is so effectively written for the voice: no one else seems to be writing opera in this country with his understanding for the voice. He knows how to set English, too; and how to write melodically without simply writing major key-minor key. There are no unpleasant leaps; but neither is there a predictable "tuniness." I'd like less recitative, more aria; but I'm happy with what Lou's left us.

EAT AT BILL'S— but that's enough for today. I'll get around to that in a couple of days.
Posted by Charles Shere at 3:20 PM