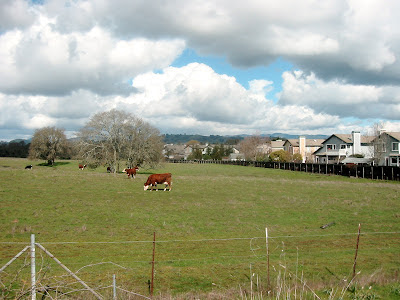 THE FIRST DAY hurts, always. Two days ago I proved this yet again, striking out across the neighbor's vineyards, along a shale road, then another neighbor's asphalt driveway to his locked gate.

From there an easy walk into town — in my case, Windsor. Here there's a pretty nice coffeehouse, where I waited with a decent cappuccino for Lindsey to drive in and pick me up.

That evening, the familiar ache in the thighs, and a little footsore too, and next morning a stiff back and knee. Just as had happened six years ago when we began walking the Pieterpad in The Netherlands.

Only thing to do, of course, is walk through it. Today I set out a little before noon, walking along the road this time, and got into Windsor — nearly eight kilometers — in a little over an hour.

That's very good time, and sitting here over a mocha I feel fine. It's perfect weather: cloudy with a threat of showers; a light dusting of snow on Mt. St. Helena and the hills south of the Geysers.

The plums are in bloom, the "wild plums" as the women in our family call them, though I think they're more feral than wild; rootstock volunteers recalling the days when this country was all planted in prune orchards. As you walk past them you smell them, sweet yet pungent. It's a breezy day; the air is fresh and clean. It's good to be walking again.

Of course walking here is not like walking in The Netherlands. Here I'm forced to walk on pavement. There are places where there's a bit of a shoulder, gravel for the most part; but it's so steeply raked that you feel like you're walking on a roof, about a twenty-degree angle — not good for your ankles, knees, or hips. So I keep on the asphalt, and even that's rounded.

Approaching Windsor, once past the site of the World War II prisoner-of-war camp, once past the cows in the photo above, you're on sidewalk. Here the footing's flat, but the pavement's concrete: hard on the feet.

It's almost exactly eight kilometers from our front door to the middle of Windsor, where the Café Noto rewards me today with a mocha, and I whip out my folding keyboard and write this on my Palm — connected to the Internet via the free wi-fi that permeates the businesses bordering the "Town Green." Windsor's an odd place, its commercial architecture phony as a Hollywood sound set, all developed within just a few years (and still ongoing), but better than the shopping plazas set off by their enormous parking lots.

Eight kilometers in eighty minutes: a good clip, faster than we'll be doing in Europe in a few weeks, where the sights will be less familiar and the footpaths, I hope, less unforgiving. I can hardly wait.
Posted by Charles Shere at 1:35 PM