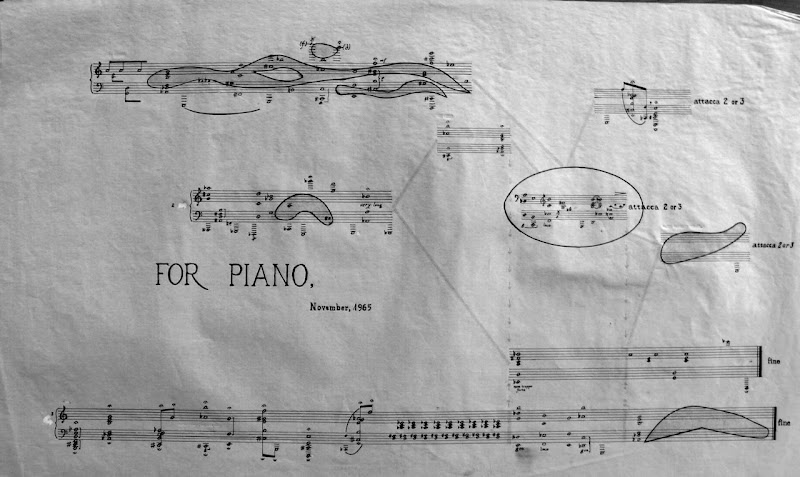 IT WAS MY SECOND piece for solo piano. (The first, Three Pieces for Piano, was composed about two years earlier, and later turned into a Small Concerto for Piano and Orchestra.) In those days one wrote one's music on semi-transparent paper; from these originals subsequent copies could be made using a blueprint process. Every composer over sixty must remember the ammonia scent that lingered among the music.

I taped a sheet of 14-by-24-inch paper down on the drafting table and drew eight systems in varying lengths, using a very fine Rapidograph and India ink. Oh, the pains we took in those days.

The piece is in "open form" but otherwise mainly fixed: the ptches definitely fixed, the durations and dynamics relatively so. I wanted a degree of improvisation, however, so I added six overlays of screen-dotted paper, determining their shapes with a French curve and intuition. Within those areas I would ask the pianist to add any material that might come to mind. Other overlays, of rows of dots, connected certain systems to indicate the pianist's route through the score.

Influences: Karlheinz Stockhausen's Refrain and various pieces by Earle Brown. Model railroads, now that I think of it, and gardens, on the concept of a pianist (and thereby his listeners) wandering a route through a piece of music, often returning to a central area, before finally ending the couse at a predetermined destination.

The premiere was played by the late Julian White, a very sensitive and wise pianist who went to the intrinsic humanity of whatever he played, refusing to worry about absolute fidelity to the score. I still have a recording from a subsequent performance, also Julian's; you can listen to it here.
Posted by Charles Shere at 12:52 PM