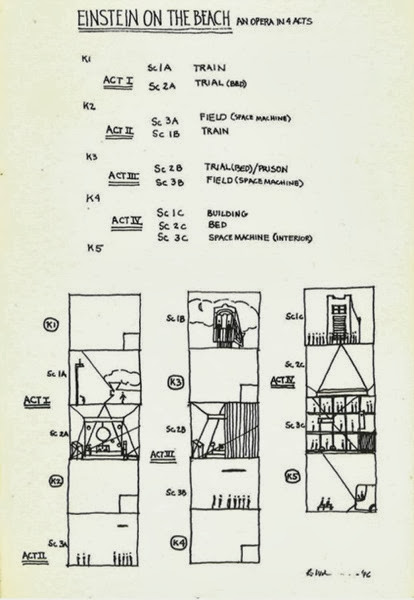 Eastside Road, October 14, 2013—
WHY WOULD ANYONE in his right mind spend hundreds of dollars and travel thousand of miles to see Einstein on the Beach four times in eighteen months — unless it were one of the great moments in the century of art from, let's say Symbolism to Postmodernism?

So there we were again, two nights ago, in center seats in the fourth row of the balcony at the Dorothy Chandler Pavilion in Los Angeles's Music Center, sitting among an enthusiastic and attentive audience for the most part. (I wasn't able to see how the higher-priced section downstairs looked: I'm told there were empty seats.)

We saw the premiere (not counting an earlier preview) of the current traveling production of the Robert Wilson-Philip Glass-Lucinda Childs opera in Montpellier in March 2012; I wrote about that here and here. A year ago we saw it in Berkeley, as I mentioned here.

Then in January of this year we flew to Amsterdam, as I mentioned here. At the time we'd planned that trip, the Amsterdam performances were thought to be the final performances on the tour, but subsequent bookings were signed for Hong Kong, Melbourne, and this month's in Los Angeles. Perhaps the tour will go on forever: I almost hope so.

In each of the last three dates we've made with Einstein we've introduced friends and/or family to the opera, making it a double-date of sorts. I feel it almost an obligation to introduce others to this event, for a number of reasons, all of which I've already written about, over and over. I think I finally said it best in the most recent post, after the Amsterdam performance, when I tried to deal with

the question "Well, what is the opera about? In a nutshell, it's about the Twentieth Century, the historical process from steam trains like those Einstein rode in his youth, when he profited from the experience to analogize his theories on the relativity of time for popular understanding, to the age of the space ship.

But I almost completely gave up on commenting on the main thing the opera is about, which is Theater. As the ancient Greek plays are about cosmic things, examining human dilemmas in cosmic contexts, so are Robert Wilson's. The opera is about Theater, and Time; and it uses theatrical time, and plenty of it — over four hours, in which the audience is free to roam if necessary — to examine those two notions.

Having already written so much on the opera itself, I'll just comment on a few impressions from Saturday night's viewing. The Los Angeles installation of this traveling production seemed faster to me, though my companion assures me the running time was almost exactly what it's been before. Time seemed to pass more quickly: the opera seemed, well, defter. The sound seemed richer, too. The wonderful saxophone solo under Act IV scene 1, the "Building" scene, was counterpointed with percussion I'd not noticed earlier, and with a flute more prominent than I'd remembered.

Of course one of the things we'd already noticed in these repeated participations at Einstein is precisely that: the changing impressions the production makes as one gains familiarity with it. It's so rich and complex that many events or moments or sounds become evident, on repeated viewing/hearing, that were very likely there all along, and simply sidelined, as it were, by one's attention having been fixed elsewhere. That, of course, is one of the things the opera is "about."

Another thing about the Los Angeles production: the lighting seemed subtler, richer (that word again), even more effective. There were more colors, and many of them were more delicate. The band of light ending Act III scene one — the second of the two extended dance scenes — was particularly affecting, bringing James Turrell to mind — a particularly appropriate quality in Los Angeles.

Even the dramatic content of the show seemed affected by the geographical culture of its locaton. The second trial scene, which seemed so Kafkaesque in Amsterdam, passed by almost as entertainment in Los Angeles. So, too, the first trial scene, with its dialect spoof of feminism, borrowed the movie-and-TV context to become less potentially objectionable, more simply diverting.

I've reproduced here — a Los Angeles Opera spokeswoman invited me to lift it from their website — Wilson's drawing which serves as a non-verbal aide-memoire to the opera's structure. It repays attention, I think, as the structure is fascinating: three scenes (Train, Trial, Space Machine) repeated across four acts which are separated by "knee play" entr'actes. So the opera presents the idea of Relativity (encapsuled in the famous train analogy, showing that time passes differently for the passenger on a train than for a stationary observer of the train); then the effects or the expressions of relativistic concepts on social or political situations which imperfectly confront them; then the aspirations of 20th-century humanity to harness those concepts to technology which might lead them out of the century and its oppressions.


Plenty to think about here. It would be so interesting to spend a weekend in the country with the friends and family we've introduced to Einstein, talking about it. That, I think, would be the best possible form of criticism: conversation in repose, following experience in intensity.
Posted by Charles Shere at 12:12 PM

"The Los Angeles installation of this traveling production seemed faster to me, though my companion assures me the running time was almost exactly what it's been before. Time seemed to pass more quickly..."

Yes, that was more or less the point…