WE WERE DOWN AT FILOLI last weekend, there to do the annual judging.

Filoli Center, off Highway 280 down in Woodside, is many things — among them, one of the most beautiful large gardens I know. But it is also a demonstration orchard, and every year celebrates the harvest with an impressive show of fruit from its trees. As a part of this there’s an annual competition for amateur cooks and bakers, and Lindsey is often one of the judges.

This time I didn’t taste anything. Sixty-odd desserts were just too daunting, and anyway it wasn’t my job. There was one item I couldn’t resist, a ricotta lemon tart whose pastry was made with olive oil — too unusual, and too promising, to pass up: and in fact I found it delicious. But I wasn’t a judge, and the tart didn’t make the finals.

But after hanging out with a friend in the cafe, and after a fine stroll through the grounds, I was fascinated to discover a tastable demonstration of apples and pears. A number of volunteers sat at long tables, cutting sample apples and pears into slices for a sizable crowd to try. On other tables there were exhibits of grapes, quinces, and other fall fruits along with the pears and apples, all carrying identification badges.

Here was an opportunity, I thought, to identify some of our own trees. We have a row of eleven apple trees, all of them different. We know what they are, but not which is which — some idiot cut off all their identifying labels while pruning them years ago, thinking his wife had recorded not only the names but also the locations of the varieties. (He has not been allowed to prune fruit trees since.) 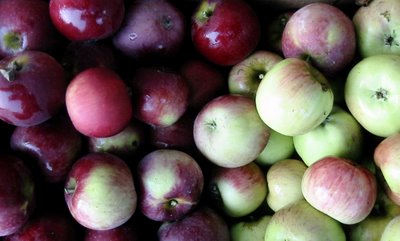 (Here’s a box of our apples: Arkansas Black on the left, Rosebrook Gravenstein on the right. Our little apple trees aren’t much taller than I am, and last spring was so cold and rainy several didn’t set blossoms; still, we picked several boxes like this, probably sixty pounds of crabapples alone from one little tree in the middle of the garden.)

Filoli’s orchard puts ours to shame; it boasts more than ten times as many varieties. There sliced and available for tasting were a good twenty-five varieties, from American Summer Pearmain to York Imperial; and on the side table, wearing their names on little pennants of paper flying from toothpick staffs, were another hundred or so, from Albemarle Pippin to Yellow Bellflower. And indeed some looked much like our own apples. Apples are apples, of course, one’s much like another to a certain point. But there’s a lot beyond that point, and that’s where life begins to be really enjoyable.

All good apples (this sentence will be an example of circular logic) are aromatic, with reminders on the palate of their fairly close relationship to roses. Beyond the flavor, of course — or perhaps before it — there are the important qualities of looks and feel. Like all primates, we respond most quickly to red fruit: this has hampered California’s orchardists for nearly two hundred years, as apples rarely redden “properly” in our warm climate. On the other hand the russeting that characterizes a number of varieties has become unfamiliar and for that reason undesirable among many supermarket shoppers as old-fashioned varieties have fallen by the wayside.

Feel presents a different set of values. An apple, not to mention a pile of them, is a lovely sight, but the sense of sight has always seemed a little abstracted to me; it’s a sense one can be objective about, it’s the expression of the existence of an object with its own separate qualities and characteristics quite unconcerned with one’s own. Mouth-feel, on the other hand, even considered apart from the almost inseparable qualities of taste and smell, is intensely personal. You can’t get much more intimate.

Apples are prone to unpleasant mouth-feels: no one is attracted to mealy, cottony, mush, or rocky apples. And to tell the truth a good many of the old varieties of apple fall short here: they weren’t really selected for the pleasure of their mouth-feel. (Lord, can’t we have a better word in English than “mouth-feel”?) But that’s for a simple reason: many of these apples were selected for their keepability or their usefulness in the production of cider.

And in fact outside the tasting rooms the Filoli staff were busy cranking a fine cider-mill, and cups of the stuff were available for quaffing. When I was a kid this was an annual routine. We were allowed the windfalls at an orchard across the road, and spent an afternoon every fall picking them up by the hundreds, dumping them into a hopper, and watching the cloudy juice run from the basket-press. I was aware, of course, of the bugs, the rot, the leaves, and the worms that entered the process, and of the danger of stings by yellowjackets as interested in the apples as we were; but the cider was still a very good thing, and the chemistry involved in Dad’s experiments with brown sugar and raisins, in Mason jars of cider placed on window-sills and covered with cheesecloth, provided diversion in the weeks following.

At Filoli last weekend three apples jumped out among the two dozen I tasted: Cox’s Orange Pippin, Ashmead’s Kernal, and Skinner’s Seedling. Cox and Ashmead seemed to have cider in mind, but Skinner, whose seedling was the only truly local apple on hand — having been found right next door in San Mateo, some decades ago — was a classic eating apple, and provoked such vocal enthusiasm from me that the very nice lady slicing them said You enjoy it so much I’m going to give you one. And she did, and I put it in my pocket, and it still stands on our dining table because it is such a beautiful thing.

I don’t know when I’ve seen an apple whose skin is so wonderfully white, and yellow, and red. The white is somewhere between milk and ivory and shows only in a few places, probably where the fruit had been shaded from the sun; the yellow suggests sunshine and hay; the red blushes faintly in direct light, but in one patch — where the afternoon sun was probably strongest through an opening in the tree’s foliage — streaks and slightly spreads with the bluish undertone I associate with “Chinese red,” a color you don’t see that often in edible fruit. And all over the apple there’s a pattern, neither random nor immediately meaningful, of darker freckles.

Skinner’s Seedling is crisp and juicy on the tongue, and floral and complex on the palate, with a perfume that seemed to combine all its other qualities and go right to whatever part of the brain it is that simultaneously is overcome with sensual pleasure but busily analyzes and records all that information. And I’m sure it’s as good for your health as it is enjoyable. 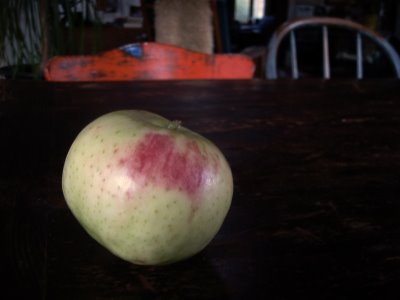 LATER THIS WEEK we fly to Amsterdam, where we almost certainly trade today’s fog for some persistent rain. On the other hand we’ll dine chez Marius, and see friends and grandddaughter, and go on to the Salone del Gusto. I hope there’ll be reports here on a frequent schedule.
Posted by Charles Shere at 10:07 AM