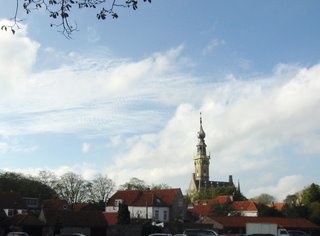 MY MOTHER, WHO IN MANY WAYS I never really knew or understood, gave me among other things a copy of Desiderius Erasmus’s The Praise of Folly as a parting gift when I went off to college. I’m not sure why she chose that text; probably she hoped to inculcate a sort of liberal intelligence. I found it confusing, as was all of life, particularly when regarded in a context including family.

But it followed logically another book I’d already come to love, Henrik Willem van Loon’s fanciful history-biography anthology Van Loon’s Lives, which on recent re-reading reveals itself a fine production of propaganda in defense of European (and especially transalpine) values in the face of the brutalities of the Third Reich.

Van Loon’s megillah was his unexplained ability to invite someone from the past, often quite a remote past, to dinner every Saturday night. His first guest was Erasmus, and he was so helpful he became the constant mediator between van Loon and his romantic-historical project.

There were memorable evenings. Emily Dickenson hid in the attic, sliding slips of paper with short poems written on them between the cracks of the ceiling; they fluttered down to Chopin, who played the old spinet in the parlor. Mozart and Hans Christian Anderson came; Queen Elizabeth and the Empress Theodora came; Robespierre and Torquemada came. There were great explorers and scientists, writers and artists. One Saturday afternoon the town square was taken over by dozens of Bachs whose improvisations entertained an equal number of Breughels, all busy at their sketch-pads.

All this took place in the town of Veere on the island of Walcheren in the Dutch province of Zeeland, relatively safe from the early days of World War II. In fact, however, a couple of years later, the island’s chief city Middelburg was badly hit by German bombs. Van Loon wrote his book largely in New York, and it was published quickly and circulated by the Book-Of-The-Month Club as a part of America’s industrious patriotism in those days.

We were in Middelburg Sunday night returning Grace to her apartment; she’s studying at the Roosevelt Academy there, in a program attached to the University of Utrecht, Erasmus’s alma mater. The Roosevelt Academy, as I understand it, is a three-year college with an international student body; the classes are in English, and all students are required to be fluent in English, to learn Dutch, and to follow a course in the liberal arts.

The school’s main building is in the fine old city hall, where van Loon slipped his dinner invitations underneath one of the stone lions (but he never told which one) on the steps to the front door. That building is now known as Franklin; another school building, across the street, is called Eleanor. (I suppose there’s a third named Theodore.)

The Roosevelt family ascended, of course, in the Netherlands, and personified the liberal intelligence so keenly espoused by Erasmus, and so necessary to a civil society in difficult times; and I’m happy to think of these youngsters from scores of countries all coming together to study linguistics and statistics, language and literature (Grace’s subjects this semester), and particularly to study one another, and the forces that prevail in family and society, in history and the present day, that have made them what they are, and enabled them to become what they will. Grace has schoolmates from Iraq and China, England and Australia, Finland and France; from Pacific Island kingdoms and African states; dozens of languages are represented; and all these young people have to get along, and for the most part do.


WE WOKE UP MONDAY MORNING in our second-floor (in the European way of counting, which starts above the main floor) after a very quiet night. The carillon began playing the quarter-hours only at eight in the morning, I think; I hadn’t noticed it earlier. Our hotel, the Kaepstander, was across the street from the abbey, Lange Jan (is it named for the woolly underwear?), and the carillon was on Long John’s spire. So were the deep bells striking the hour. Other than that it was dead still; hardly anyone about — for most shops don’t open on Mondays until after noon. We had our breakfast in the jazz club that forms the Kaepstander’s morning-room, and set out to explore.

The abbey is astonishing, like so many Dutch religious buildings. No idea how old it is. The church roof is twenty-four meters off the ground, the length of two boxcars. It’s lit naturally through towering narrow windows composed of small panes of clear glass: Calvinism is not consistent with stained-glass. It dominates the small city of Middelburg, which is centered on it, and so forced to set its imposing city hall and market-square off to one side.

At the center of the abbey is a cloister, filled with a fine herb garden tended, the day we were there, by women volunteer gardeners who were giving it a last clipping and cleaning before leaving it to the winter. Yes, Middelburg used to be quiet, one agreed, but not now that all these students are here. But I like having them, it is fine to have youth and energy and optimism. We had a chance to have a university once before, in the sixteen-hundreds, but it would have meant higher taxes, and we chose not do do it. And now we have a second chance, and we don’t reject it.

We’d had dinner with Grace the evening before, at the Cafe-Restaurant de Vriendschap (Friendship), where I’d had an enormous bowl of mussels nicely cooked in white wine with carrot and onion and celery to give them crunch and aroma; and we had a coffee this Monday morning on the porch of the Brooklyn Cafe, overlooking the great Marktplein; and then she went to class and we drove to Veere. We had a haringbroodje — a raw herring with chopped onion, a slice of pickle and a leaf of lettuce in a soft roll, a Dutch delicacy we’re particularly fond of — at a stand in the parking lot and then ambled into town.

I hadn’t been there in years, and in the meantime it’s become quite the tourist town, its own small marktplein bordered with boutiques and cafe-restaurants; and here, finally, at the reception desk in the city hall now turned into a museum, was someone who’d heard of Henrik Willem van Loon, who seems otherwise to be not only neglected but quite unheard-of. (It’s time, I think, to republish that book, perhaps with an introduction explaining its historical context and perspective — for our own age, with its urge to political correctness, seems impatient with and therefore unresponsive to other points of view.)

Veere is small and compact, snug beside its tiny harbor: but on its outskirts, a five-minute walk from the marktplein, is one of the hugest churches you’ll ever hope to find, a true architectural folly begun in the 15th century as I recall, squat and ugly for all its enormity, clearly a defensive building looking remarkably like the concrete bunkers still to be seen in places along the Netherlands shoreline. And in fact the history of this building is more military than spiritual; Napoleon’s troops used it for stables and bunkhouses. Today it’s used for, what else, concerts of popular music — though I noticed a poster for a concert of ancient Chinese music, too, whatever that might be.

Veere was overrun with German tourists when we first saw it, in June 1974, and German’s much to be heard there today. But there are plenty of Dutch and Belgian tourists as well, and if it’s the tourist economy that’s to conserve such a lovely place, more power to it. We had a cup of tea and a nice appeltaartje and headed off across southern Netherlands to find another hotel.

Posted by Charles Shere at 2:44 AM