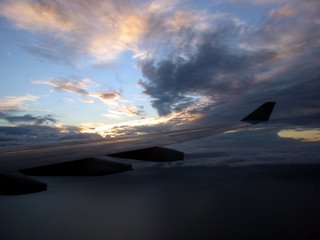 I AM A BIT OF A SLACKER, not really that much of one, for having waited so long to post a few words about this trip. There are two reasons, one technological, the other personal. The technological one is of course the inconvenience of going online, which in my case means also the difficulty of going online without paying.

The personal reason is that second word up there: sluggard. We flew Thursday to JFK, waited over an hour for our baggage, then took a shuttle to our Day’s Inn. JFK is a poor excuse for an international airport. Those who use the word “airport” to describe some postmodern totally global erasure of all things nationally distinctive have only to contrast JFK with, say, Schiphol Airport in the Netherlands to throw serious doubt on their case. If you fly to JFK you arrive at a miserable third-world country lacking conveniences and character. Perhaps this is not true if you bring great quantities of money: I don’t know about that: I don’t.

We flew Thursday to JFK, checked into our Days Inn (a miserable third-world excuse for a hotel, but clean, I suppose), spent the next morning there having lost many hours of sleep, spent the next afternoon in the “food court” at the airport catching up with a dear friend who lives in New York, and then flew the next segment of our trip.

”Food Court.” I love the expression; it suggests that your food is on trial. We ate at the best possible place, I believe, Sbarro. Guilt not proven, as the Scots say. A big salad lacking e. coli and a bigger plastic platter of spaghetti and “meatballs.” I asked the server if they had any red wine. “No: they don’t let us drink on the job,” she responded. Ah, Noo Yawk.

We flew on to Shannon, where we sat on the tarmac for nearly an hour waiting for a place to dock our airplane. Because of that we were quite late getting to our next airport, Dublin — did you know Dublin has its own little airport? We raced across the terminal to our next gate, checking in and out and in again at the antiterrorism headquarters, doffing and donning our shoes, to find that our next flight was itself delayed by an hour because of some unspecified emergency at Manchester, where it had been most recently.

The trip took two days all told, of which perhaps four hours were spent in bed at the Days Inn. We landed nearly an hour late at Schiphol, met Grace, got our car, and drove to our hotel in Akersloot, just short of Alkmaar. Why there? Much cheaper than Amsterdam, that’s why.

Nap; cold water on face; change shirt; drive in to...

A FAVORITE BAR IN AMSTERDAM:, de Oude Dock (the old dock), across Kadkjiksplein from a recently trendy Italian restaurant called A Tavola. Amsterdam is famous for its bruincafes, bar-cafes which are brown partly for their varnished wood fittings, partly for the tobacco-tars accumulated over the years. You don’t smoke in them any more, and the noxious effects of the tobacco are quite gone, but the character remains.

It’s fashionable to lament the disappearance of these bruincafes, but I think nearly every quarter of Amsterdam retains at least one. We’ve been in a few. I particularly like this one, and I wanted to introduce Grace to it; it’s the kind of place she’ll take her grandchildren to, and perhaps mention us to them, fifty years from now.

The ceiling is covered with bar coasters, like close-set scales on a fish; the room is dim; the recorded music is cool jazz; the drinks were bessengenever for Grace, sherry for Lindsey, a Corenwijn for me — that delicious, slightly cut “old Genever” gin you can get only here, unless BevMo stocks it now; I never go there.

One began to revive. The actual flights, the five airports, the four ascents and landings, the endless baggage-waits and bumpy cumulus and disreputable snacks — they were all behind us. It was catchup time: Grace is in her first year of college, her first year of independent living in Europe; she’s nineteen, full of fun and intelligence, tired from a fall break four-day trip to Paris, a little apprehensive about the schoolwork awaiting her day-after-tomorrow, but living completely in the moment, which her grandfather has suggested is the proper way to live.

And I, of course, am ecstatic to be once more in the Netherlands.

AND THEN WE FOUND OUR WAY, not without difficulty, to Marius, one of the Five Great Restaurants in the world (Chez Panisse, the Café Chez Panisse, Marius, Your Favorite Place, My Other Favorite Place) (let’s make it JoJo just now), where we had a Fabulous Meal:

with the appropriate wines, of course.

I apologize, sluggard that I am, for not having recorded this any better: I can plead fatigue. But it was delicious. You can read about Marius to your heart’s content at http://www.chowhound.com; and you can look for it several months back on this blog. I will say further only that the chef, Kees Elfring, exemplifies to me a perfect balance of the four components of serious cooking: Truth to the soil; Generosity of sensual delight; Healthfulness; and Intelligence. He knows his food from the farm, through the eye and nose and palate, to the nourishment of the body, never forgetting awareness of history, tradition, innovation, culinary analysis, perfect synthesis.

He does not do all this merely instinctively, though he is in fact an instinctive cook. He studies and thinks about these things, and works at Getting Things Right. This reflects his Dutch Calvinist background, perhaps. But he also lets go of theory and doctrine; at the last minute he knows it’s a matter of Getting It On The Table. The restaurant was full; everyone was happy.