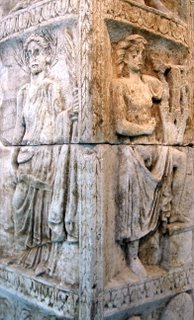 HOW TO DECIDE where to go next? That’s the recurring question when traveling as we do, with broad goals but details not quite filled in. Particularly true, for us, in The Netherlands. We have seen quite a bit of many of the Twelve Provinces, having walked the length of the country, bicycled other out-of-the-way corners, and toured by car and by train often enough over the years.

But we do not know the southernmost province, Noord-Brabant. We were cautioned many years ago — by a northern Dutch, to be sure — that we would not like it: it is dirty, or at least unkempt; it is licentious, or at least non-Protestant. It is to be sure in many ways un-Dutch: there are hills; canals are often lacking. I’m not sure why it didn’t go along with Belgium, when that country seceded from the Twelve Provinces in the 1830s, or whenever it was. But it didn’t, and there it is like a buffer zone between Belgium and the rest of the Netherlands, waiting for us to explore it.

In fact I first penetrated Noord-Brabant quite a while ago, in 1973, while on a press junket covering the opening, in Amsterdam, of a new museum wholly dedicated to the work of Vincent van Gogh. A side trip took us to Nuenen, where the hapless young van Gogh grew up in a miserable hovel of a house, near a water-mill, not far from the village church where his father was pastor. We visited that shack, now a shrine; it looked exactly like the setting of The Potato-Eaters.

(The same side trip took us to EIndhoven where a then-new building housed the Van Abbé Museum, dedicated to the latest painting and sculpture. Eindhoven is the home of one of the greatest Dutch industries, Philips Electronics, and being up-to-date was important, good for the corporate image. Potato-eaters are not the way to sell computers and video.)

In addition to further explorations of neglected terrain we have other, more idiosyncratic sieves for deciding where to go next. I have a penchant for enclaves, for example; those curious places which belong to one administration but are wholly surrounded by another. There’s one in Noord-Brabant: it’s called Baarle-Nassau, and it’s a gemeente or municipality completely administered by Belgium though entirely surrounded by the Netherlands — by Noord-Brabant, in fact.

We drove there many years ago, not having to go far out of our way since we’d landed in Brussels and were driving to Apeldoorn. We drove through the open fields that seem to lie far too high above sea level to be Dutch, through villages decorated with the omnipresent espaliered trees, on country roads smoothly paved and easy to drive, lined by pollarded willows; and then suddenly we were in a town whose architecture was all wrong — faux-French rather than Dutch — and whose streets were too wide — and, worst of all, disfigured by all sorts of commercial signs and billboards, many of them advertising some sort of lottery or gambling facility.

(On another occasion, when we were very far south in Limburg but still in a very Dutch town, I asked the hotelkeeper what that smoke was across the river. Oh, she said, that’s Belgium. It’s terrible: The Belgians just burn all their garbage out in the open, in great fires; it stinks, the smoke fills the sky, it’s polluting. And what do you Dutch do with your garbage, I asked. Oh, she said, we send it across the border to the Belgians.)

Then there’s the desire to visit places with odd or memorable names. I like Bra, in Italy’s Piemonte; we’ll likely be there next week. I like Zutphen, not far from where I write this; and I’ve always wanted to walk from Alphen to Zutphen, it seems such an alphabetically satisfying thing to do. (Our walk the length of the Netherlands took us from Pieterburen to Pietersberg: that’s why it’s called the Pieterpad.)

And so it was on Monday night we found ourselves in Oss. I’d thought to find a hotel in Den Bosch, which is itself an odd name for a city — The Bush, I suppose, though the Dutch word is in fact “bosje,” “little forest.” (By way of South Africa that diminutive has given us “bush” in the sense of “back country.”) And Den Bosch is particularly odd for it’s the familiar form of “ ’s Hertegenbosch,” which I think means “the Duke’s bush,” or something of the sort.

(In the same way “Den Haag,” the usual spoken form of the nation’s capital — or one of its two capitals, for nothing is ever allowed to be too simple in this country — is really a simplification of “ ’s Gravenhage,” “the Count’s hedge.”)

But on driving through it Den Bosch seemed unpromising, full of buildings and cars and streets but not particularly ingratiating, and I thought a smaller town down near the river would be more, well, gezellig, that peculiarly Dutch combination of cozy, comfortable, snug, and accommodating, So we left the highway and took to a secondary road, still straight and fast, well marked and smoothly paved, through regimented forests of alders and lampposts, and drove for nearly an hour through roundabouts and traffic lights, soon quite within a new town of shopping districts separated by neat rows of newish detached houses and apartment blocks, and finally inside an older town lacking only a hotel to justify the amount of space it occupied.

We did find one, ultimately, but it cost two hundred dollars a night, I can’t imagine why. Then we were directed to another, the City Hotel, less than half the price but still expensive by our standards, but comfortable enough. And so we had dinner — guinea-hen and a salad for me — and slept soundly.

THE NEXT MORNING TOOK US to Nijmegen, a city that’s always attracted me, but remains to be fully explored. We were there to revisit its Valkhof Museum, seen only rather hurriedly a couple of years ago. Nijmegen is literally at the end of the world, from the point of view of the Roman empire: it stands at the northern limit of Mediterranean expansion into Europe (not counting the island colony of Anglia), high on a bluff overlooking the wide Waal river beyond which camped the undefeated and surly Batavians.

The Romans were in town quite a long while, and left a good many souvenirs behind, and the Valkhof is happy to let you have a look at many of them. Coins, armor, weapons, tools, hardware, sculpture, jewelry; all the things that were too durable to rot away, too lost in garbage dumps (or worse) to have been melted down for further use. (I wonder, sometimes, about the successive forms taken by metals as they’re cast and re-cast into hinges, safety pins, helmets, frying pans and the like. When I was a boy the iron fences in the neighborhood were given to the government to be melted down for the war effort; and now scrap metal, mostly in the form of abandoned automobiles, is one of America’s greatest exports, along with waste paper and, lamentably, topsoil.)

The Valkhof presents all these artifacts in a series of fine, spacious, open rooms, well labelled if you have the patience to work out the Dutch; there are particularly absorbing displays of jewelry, coins, ceramics, and glass. That Roman glass! Drinking vessels and bottles, for the most part, of course, much of it elegant in form and both luminous and fragile — the clear greenish cast having often taken on various milky qualities as various minerals have reacted to light and age. Glass is something like petrified flesh, I think; it is fragility made immortal though still frighteningly vulnerable.

You move from these contemplations into more recent times: the Middle Ages and the rise of mercantile modernity; the taking up of Art as a major preoccupation. Portraits and furnishings, the souvenirs of pride: like so much of history, and particularly the history revealed in museums devoted primarily to Art, the poor and the downtrodden are taken for granted; it is the wealth and the enterprise that is celebrated; mere survival — which is what most of human activity has been — is rarely to be seen.

(And so ugly as it is, van Gogh’s Potato Eaters is significant beyond itself, and though it cost him his life van Gogh’s tragic sympathy for the poor, in the face of the ironic dependency of much of Art on the charity of the idle rich and leisure-class, is among the noblest aspects of the beginnings of Modernism.)

And after the Middle Ages and the Baroque and the rise of colonial empire and the age of industrialism and the beginning of Modernism here, in the final rooms of the Valkhof, is the triumph of Twentieth Century art: Pop. Art began to celebrate mediocrity in the 1960s or so; and fifty years later has taken the next logical step and become, from my point of view as an aging resentful ex-critic, mediocre itself. We took in a survey of current production in this province (for we are now in Gelderland, having left Noord-Brabant behind us with Oss): conceptual and technological and committee-made visual art, mixed-media of course, the best of it ironic; and I thought again of the French poet Francis Ponge, who wisely remarked that irony is the earmark of a decadent age when rhetoric, dying, turns to itself for its subject.

And we had a cappuccino and a piece of “industrial-cake,” a very dense, heavy, surely healthful cake full of sunflower seeds and pine nuts and whole-grain meal baked in the form of a heavy gear; and went down into the parking garage for our car and drove through the familiar Hoge Veluwe, the forest and heath at the heart of the Netherlands, to Hans and Anneke and a day or two of relaxation with old friends.

later: And now we’re in another airport, waiting for another plane, this time to fly to Italy, whence more tomorrow...
Posted by Charles Shere at 9:04 AM