TODAY REPRESENTS THE center day of our Sicilian journey: we arrived in Palermo the 11th; we propose to leave the island the last day of May. And today, after a week on the road (we spent five nights in Palermo), we've driven around about half the coastline, from Palermo to Tràpani, Marsala, Sciacca, Agrigento, Licati. The western half of the south coast is unremarkable from the car: at its best reminiscent (to me) of the California coast from say San Luis Obispo to Santa Barbara, at its less interesting reminiscent of the Baja California coast.

What's different, of course, is the architecture, the town layout, the system of roads, the people, the food — ﻿pretty much everything but the climate. I haven't written anything yet about the ruins we've visited, Selinunte and Agrigento's Valley of the Temples: what I've written about Herculaneum and Paestum will compensate for that, perhaps. We've visited few museums, really only three: Mozia, Mazara, and Agrigento, whose Museum of Archaeology required half a day and then was barely seen. 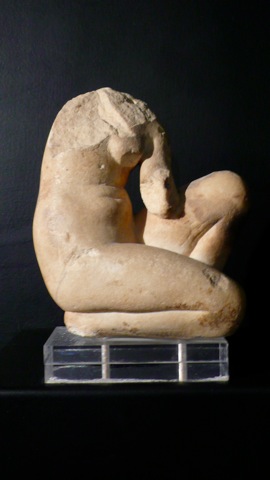 The pride of the museum… well, that's a silly way to begin this sentence: one of the many breathtaking aspects of this museum is the many Greek ceramics, painted ones, mostly Attic, brought to the Greek colony here in the 5th century (BC, of course), very soon after it was founded. I wonder if the Greeks didn't establish a museum here; the pieces seem absolutely splendid: could there have been that many collectors living in this town?

But I lingered too over smaller items, like this fragment of a seated Venus who had probably been wringing out her hair after the bath (perhaps she twisted her head clean off): hardly bigger than my hand, it's perfectly carved, soft and insinuating and altogether lovely.

Agrigento is of course famous for its temples, of which one stands nearly complete (fittingly, that presumed dedicated to Concord). Of these the largest was dedicated to Zeus: it stood something like ten stories tall, was big in proportion, and is today a mess of fallen stone. Column-sections and capitals eight feet in diameter lie strewn about; it must have been a terrible racket when it collapsed. I'm glad I wasn't there.

Impressive as the ruins are, and delicious as the vases and sculpture are, it was the Kolymbetra Garden alongside the ruins that provided the pleasantest part of the visit, even though we strolled it in a shower of rain. Planted in a gorge alongside the ruined Tempio di Giove, where 2500 years ago apparently pools and parks prevailed, it offers rectangular grids like those of the ancient city but delineated with citrus groves rather than ruined stone buildings. Everything is living, fragrant, productive, and beautiful. Strolling the ruins, your mind is preoccupied it; strolling this garden, your senses are delighted. There's a place for each of these activities, but I like to keep them skewed a little out of balance toward the pleasurable and sensual side.

Today's drive took us not only inland but well up into the hills; we're probably at 2500 feet — I﻿ haven't checked the altimeter. We're in a comfortable hotel in Ragusa, and we have wi-fi, which is why I write just now — ﻿though I see it's time to stop, as we have to get out for dinner. More, perhaps, about the drive, and the topography, next time…

As always, our meals are recorded at Eating Every Day﻿