I HAD ONLY ONE goal during this four-night stop in Campania, and that was Paestum. Well, two goals of course: the other was to visit our granddaughter who's spending a year as an exchange student in Caserta.

The real goal of the trip is Sicily, and you can only do so much. (Years ago I told Lindsey that we could eat on these trips, or visit churches, or look at paintings, but we couldn't do all of them, or even any two of them. You can only really attend do so much, or you'll go crazy. Lindsey, of course, demurs, and is not crazy.)

Naples is certainly worth a long visit, so we decided to do that later, next year, maybe, dedicating at least two weeks to it. We'll visit Pompeii then. Fran has been there a couple of times, but not to Herculaneum, so as I wrote the other day we stopped off there on our way to Paestum.

Well, then, we really should have a look at the Amalfi coast, I'm told, so we stopped off there too on our way to Paestum, spending the night among steps, as I mentioned the other day. I also mentioned theater day the marvelous Villa Rufolo in Ravello: it dates back a thousand years, has been gardened maybe half that time; and presents an entrancing history of flux, each period thriving, decaying, contributing footprints (and sometimes more: witness the beautiful Moresque arches) to the next stage of use. It's now headquarters for a Centro Universitario Europeo per i Beni Culturali, which sounds like a very good idea; it wouldn't be a bad place to hang out.

But my real curiosity this time was Paestum, so after a long peaceful night's sleep at La Vecchia Quercia we ate a nice breakfast of home-made pastries and jams and set out south, getting off the autostrada at Battipaglia — "Beat Straw": who makes up these names? — and continuing on through trashy suburbs and sprawl, then bucolic countryside, on a secondary road to Paestum. 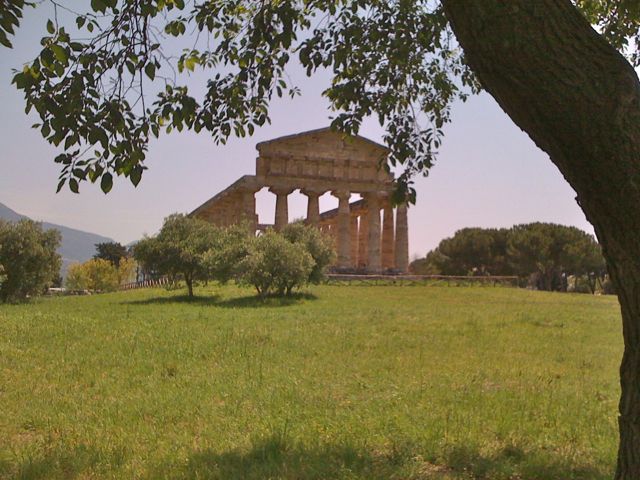 The Greeks made up that name, but they called it Poseidonia; it was the Latin-speaking Romans who came along and made it Paestum. The site is marvelous: you can see why they settled here, Lindsey said as we got out of the car; it's open to sea and sky, the lift is quite special, the breeze soft and gentle, the soil fertile and generous.

They arrived about 600 BC, the Greeks did, and built a couple of temples, the chief one to Poseidon the god of the sea — better be nice to him when you depend so much on calm seas — and another to Hera. Just beyond her temple was a river; on the other side were the Etruscans, who were kept out by an imposing set of walls, still impressive. Another inland tribe, the Lucans, managed nonetheless to occupy the site in about 400 BC, changing the name to Paistom; then Alexander the Great's uncle took it back in 326, but the Romans finally moved in fifty years fate that, building their own empales, and a gymnasium of course, and all that.

Then came a succession of reversals: malaria, Christianity, poverty, Saracen invaders and the like. It was finally pretty well destroyed by Frederic the Second, in 1246; and then it stood abandoned and forgotten for centuries, even though at least three monumental temples stood in remarkably good condition all that time. It took the Romantics — Goethe, Shelley, Piranesi — to make these ruins and their site fashionable; and for years every American bank and courthouse has owed them a great deal.

All that information from the leaflet thoughtfully provided by the Azienda Autonoma Soggiorno e Turismo of Paestum, and I thank them for it, and for so well preserving the grounds of this hauntingly beautiful and strangely reassuring place. It would be best to spend at least one night in a hotel here: the museum offers a lot of absorbing information and some remarkable archaeological finds from the various levels of Paestum's history, and I'd want to visit the site as early in the day as possible, returning at twilight.

This is a tour of discovery, though, not a tour of fill-in-the-details. We strolled the grounds for a long hour, had lunch at a very nice restaurant recommended by the woman at La Vecchia Quercia, then strolled back along the front side of the grounds, ending with a tour of only one floor of the museum — filled with wonderful Greek painted vases found in these ruins only fifty years or so ago.

The most obvious attractions in Paestum are the three enormous temples, one dedicate to Ceres (this was a major agricultural colony) at the north end of the site, two about a kilometer south at the other end of the city as it's now been excavated: the "Tempio di Nettuno" (in fact probably dedicated to Zeus) and the "Basilica" (probably the temple to Hera).

You can only look at these monumental buildings and wonder. The stones are enormous and incredibly old — these temples were built twenty-five hundred years ago — yet they seem intimate and familiar. Their color, ranging from a warm greyed white to a very pale apricot blush, and the soft-seeming texture of their surface (you cannot actually touch them; they're discreetly fenced away) make them friendly, reassuring, rather than forbidding and austere.

The Greeks clearly built these architectural masterpieces to last. I have no idea where this stone came from, or how the columns were erected (let alone the immense stone blocks surmounting them!), or how the labor was organized and paid for, or what kind of training developed the architects involved; all this information will come when I'm home, and have access to books and the Internet. At the moment, both during the actual visit and while contemplating it next day, it's enough to see these buildings on what is now a tranquil, even pastoral site.

Of course the temples dominate what would have been public space. We know that it became cluttered over the years with smaller temples and even smaller altars set up, even strewn about, in front of the temples; you can imagine that worship devolved from that public but essentially social and civic transaction with natural forces and spirits that need to be considered — springs, watercourses, seasons, winds, seas, sun and moon, fertility — all that attitude we used to dismiss as "pagan," but begin to honor again, more scientifically of course, under the umbrellas of Evolution and Ecology — devolved from that kind of transaction to a still publicly visible but essentially individually expressed ostentations display of moral rectitude or, worse, theocratic domination.

The Romans didn't build as well, for whatever reason. Stone columns give way to assemblies of brick and stone plastered over to imitate the Greek ideal. Enough remains of the Roman city here to suggest the social structure familiar from Herculaneum and Pompeii: small sleeping rooms, larger reception rooms in houses owned by the upper classes. One wonders where the slaves slept.

The Romans built in the familiar system of rectangular blocks of buildings — insole — gridded off by fairly narrow streets. I have the feeling excavation has only proceeded recently and, perhaps, haltingly; good thing: new technologies will likely make further research less intrusive and damaging. It was only in the 1920s and '30s that modern residences were cleared away form this site; clearly current curio stands and restaurants, even the nice on we lunched in, must stand atop things worth knowing about. 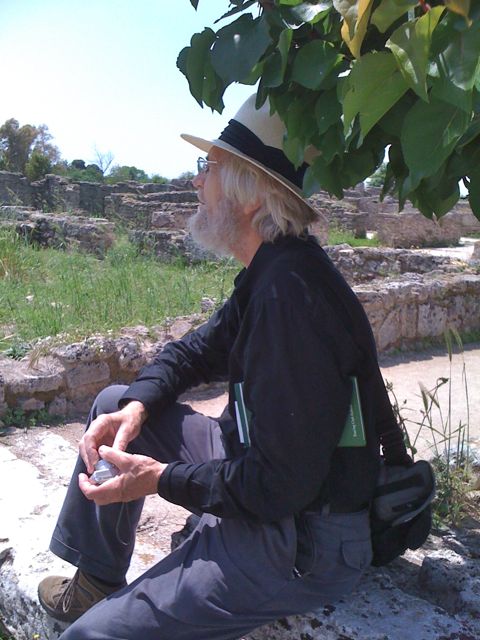 We came away from Paestum reassured, as I've said — reassured that the Past, great and Aware as it undoubtedly was, did not simply stop or collapse or anise; its presence cntiued through lesser ages, was even forgotten entirely, and recurs today. Just so Paestum will prove to be for us, I think, a compelling introduction to the next few weeks as we visit similar sites in Sicily. Sicily is Persephone's Isle, consecrated to the goddess of agriculture and the seasons, who is forced to spend part of each year among the dead; for us to flourish we must be born, increase, weaken, and die; so must our cultures. But our cultures, like ourselves wish we face it, are rooted in Place, situ, terroir. Paestum and its temples and this country and its fruits are thoroughly integrated, and tat reassures me in times of apparent disintegration.

Notes on our meals during this trip can be found, as always, at Eating Every Day; photos can be seen at this webpage
Posted by Charles Shere at 10:29 AM