LOOKING OVER THE PHOTOS we took last night in the Greek Theater of the performance of Euripides's Hippolytus — ﻿I've just posted a selection of those photos online — ﻿makes me realize I have further things to say about the production. First, though there was no program distributed, and thus no credits at all, I've learned subsequently that the translation into Italian was by the poet Edoardo Sanguineti, who died only last week. (There's a considerable article about him, in Italian, here.)

At breakfast this morning a woman staying in our B&B mentioned that she'd heard complaints within the audience that some of Sanguineti's text seemed anachronistic: for example, he'd used the word "tsunami," presumably in the messenger's account of the seafront accident that kills Hippolytus. Of course I don't have Sanguineti's text at hand — ﻿it's apparently his last work — ﻿and the English translation I do have of his translation is utterly unreliable. It seems reasonable to use that word, at least to me, if within the context of Poseidon's attack on Hippolytus. I feel Euripides was trying to explain already outdated (though I believe eternally true) accounts of such events to his audience; why shouldn't Sanguineti do the same? 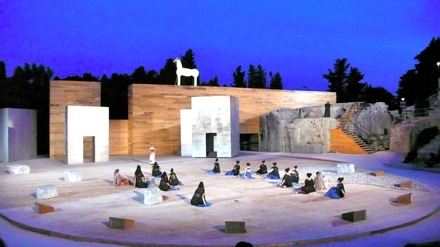 The photos remind me of the considerable force of the production, first simply visually, second emotionally. The visual production is poised between realism (the dead stags, the costumes, the detail of Phaedra's tablet) and abstraction. It uses the vast scale of the stage to great effect, often putting actors, even at key points in the drama, high on the backdrop, or off in what would be the wings in a conventional theater. The lighting was extraordinarily effective, coming on so subtly at twilight one wasn't aware of it at first; and the constant presence of Nature around and beyond the stage underlined the force Nature plays in Euripides's plot.

(At the end, while gloating over her moral victory over Aphrodite, Artemis lifts her right arm, pointing to the waxing moon that hung exactly overhead.)

The acting was passionate; I thought it utterly convincing in portraying noble individuals completely overcome by their passions. In the photographs you see Ilaria Genatiempo as Aphrodite, Elsabetta Pozzi as Phaedra, Guia Jelo as the Nurse, Massimo Nicolini as Hippolytus, Maurizio Donadoni as Theseus. (I find these credits in a review online, the only one I've found so far. Alas it doesn't mention the very able actor who played the Messenger, and I don't have a photo of the fine actress who played Artemis.)

The play continues to preoccupy me. You know the story: Hippolytus has vowed chastity (and is a vegetarian to boot); Aphrodite, angered by this insult, makes his stepmother Phaedra fall in love with him; she is dying of love and tells her Nurse, who in turn informs Hippolytus, who spurns her; in revenge Phaedra, who kills herself in despair, leaves a suicide note (the tablet) informing her husband Theseus that his son Hippolytus has raped her; Theseus curses his son, who is then attacked by Poseidon, but who lives long enough to forgive his father when Artemis reveals what has happened.

A tragedy born of a vow to live unnaturally; a physical passion that unseats reason; a father who kills his beloved son but is forgiven — ﻿it's all there. Today at lunch I said to Lindsey: but what about Hippolytus. It's just so inescapable, so overwhelming. What about Hippolytus?

Well, Lindsey said, there's always Jesus. I hadn't thought of it before: Jesus and Hippolytus have a lot in common. (I don't know if Hippolytus ate fish; I suppose he did.) We've seen enough bleeding Jesuses lately, and sorrowing Marys, in this Mediterranean setting, to make us begin to think about the continuity between the pagan and the Christian "explanation" of things. Today we saw, even, a cathedral installed within a Greek temple; you don't get much more literal a continuity than that.

Syracuse, including the Hippolytus photos: gallery.me.com/cshere#100299﻿

As always, our meals are recorded at Eating Every Day﻿﻿﻿