IT'S BETTER NOT to bring anything you don't really need, she warned us. She was standing in the driveway of the Hotel Excelsior, where she'd told us, when we telephoned, we could park the car. I shrugged and put the things we didn't really need back in the trunk — the attaché case and the little iPad cased — I slipped on my backpack, and looked at Lindsey's suitcase: but before I could pick it up the woman from the hotel had it.

I'm used to it, she said, I climb these stairs five times a day. There are three hundred of them, she said, rather proudly. We began the descent, carefully, for the steps were treacherous, and as usual I began counting, this time aloud and in Italian, which amused her. 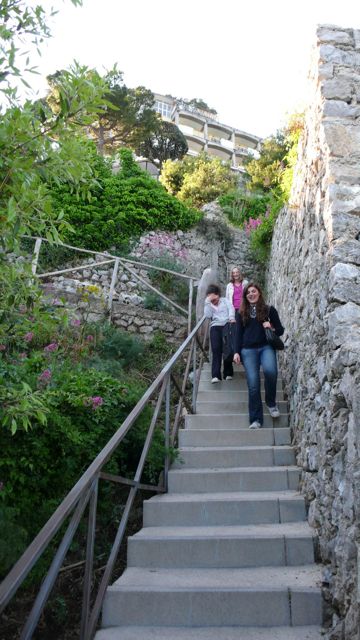 The steps are steep, often of varying height, and shallow of tread. After a hundred or so the path leveled out and we strolled more gently downhill under lemon trees heavy with fruit; but then we came to more steps. At the bottom, only about a third of the way down to the shore, we arrived at our hotel, formerly I'm sure a vacation house, now converted into a B&B.

It is really quite a wonderful place, silent but for the birdsong, cooled by soft breezes, endowed with spectacular views. Our room had a double bed and a single, as we had Fran with us, and tis own bathroom with shower. Curiously, once you closed the double door into the bathroom, it could only be opened from the other side, by someone pushing on it.

I soon realized I'd want my jacket, which I'd left in the car. Iw alkyd through the reception lobby on my way to the three hundred steps. Where are you going, the woman asked. Why do you ask, I said. I'm going back to the car for my jacket. Give me the key, she said, I'll get it. Oh no you won't, I said; I need the exercise. This time I kept careful count: there were in fact three hundred eleven steps, five of which were in the contrary direction. Perhaps if you count them twice in order to cancel them out, and then subtract them from the total, that's how you arrive at three hundred. 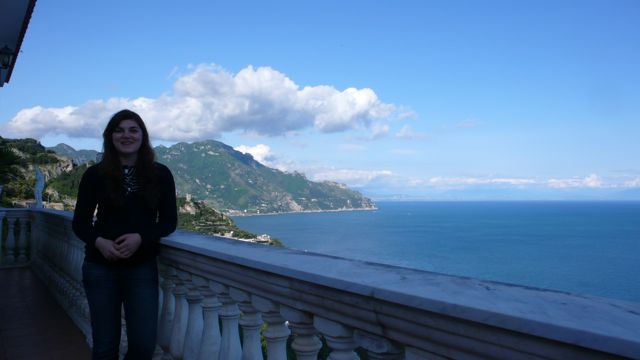 We rested up a bit, then walked to the restaurant affiliated with the B&B. This involved at least six hundred more steps down from the hotel, a stroll through the town of Amalfi, then more steps down into the town of Atrana to the restaurant, right on the beach. Atrana is a much smaller town than Amalfi, I think, probably originally not much more than a small fishing village. Eat out or in, was the first question, hesitated over, discussed, while waiters stood by, amused. Inside. Dinner was very good, involving the tiniest clams we've seen.

Afterward we took the bus back up the hill to Pogerola, arriving about eleven o'clock. We still had those 311 steps to descend. We slept well, but next day our calves were very sore. Breakfast was delicious and copious, and the day began softly, barely perceptible voices rising from a fishing-boat in the harbor far below.

Notes on our meals during this trip can be found, as always, at Eating Every Day; photos can be seen at this webpage
Posted by Charles Shere at 8:30 AM

Unless I'm mistaken, Gore Vidal lived for many years in Amalfi, in a lovely villa overlooking the sea. A documentary of his life was partly filmed there. A long hike up steps to attain it. These photos look familiar.