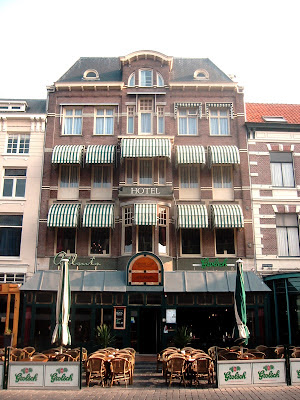 Over the last four days the village of Beek and the city of Nijmegen have revealed the extremes of life-style here in the Eastern Netherlands. Beek is a suburb of Nijmegen, hardly more than a mile from the city limits, but separated by woods and open country. There used to be a steam-railroad out to Beek, but that's long gone, replaced by buses that run every hour or so -- and, of course, the private automobile, racing along a two-lane priority road (itself flanked, in the Dutch manner, by a two-lane fietspad or bicycle path).

We checked into the Hotel Atlanta, on Nijmegen's Grote Markt, the principal square at more or less the heart of the city, on Wednesday night, the 11th, having tired of sleeping in a different bed every night. That night, as I've already written, we simply ate at the hotel. It is more or less centered on its block, facing away from the river Waal, rather an ornate building, about a century old I'd say. Looking at it from across the Marktplein -- the market place -- it is the tallest building on its block by about a storey, with a handsome arched three-light window centered under the roof: that was our window, to our delight at first, our sorrow one night.

The hotel, like all the neighboring buildings, is furnished with rattan tables and chairs out on the street, an outdoor eating- and drinking-place, three or four tables deep beyond the narrow sidewalk. Since last week was a heat wave here in The Netherlands, these tables were frequently filled: Nijmegen is full of people with apparently nothing better to do than drink coffee or beer.

We took the time our first day to introduce Giovanna to the Valkhof Museum, because I can't help being pedantic, and always want to share my enthusiasms, and I find Nijmegen immensely interesting, and this museum makes its history pretty clear. The history itself begins about two thousand years ago, under the Roman Empire. There was of course plenty of human activity before then; people farmed the fertile lowlands for centuries before they figured out how to record what they were doing.

The Romans took care of that. I imagine this was a lively outpost: the northernmost reach of the Empire, not counting the colony that is now England. This must have been a cold and miserable outpost to generals and administrators who longed for the pleasures of the capital at Rome (unless they had good reason to congratulate themselves for having been posted away), but they made the best of it, and the surroundings could have been worse.

Why was this the northermost reach, and what were the Romans doing here? Well, if you conquer all of Gaul, and keep pushing north, the road's relatively easy until you come up against this river, which is not called the Waal (which means, of course, Wall) without reason. It's broad, and its current is fast. A lot of water moves through it: it drains at least three quarters of the Rhine, which brings snowmelt from the Swiss Alps, and rainfall from the German plain.

The Romans apparently figured whatever was beyond the Waal wasn't worth it. What was beyond was Batavia: the Romans tried to subdue the Batavians, but lost interest. The Batavians apparently stayed on their side of the lower Rhine, a few miles north of the Waal; the land between was a sort of no man's land, farmed by those prehistoric peasants, who must have been uneasy between savages and Romans and the constant threat of flood.

Nijmegen, the name, derives from the Latin "Noviomagus," Newmarket. One of the first things the Romans did, about two thousand years ago, was grant the town "market rights." Thanks a lot, I imagine the locals said; we've been marketing here quite well for centuries without you, and now we have to pay taxes. But the Romans thought it was important; judging by the exhibits in this museum they made quite a nice Roman-style city of the place; the coins and pots and pans and armor and jewelry and especially the glassware that's been found testify to a taste for luxury and comfort and high fashion that seems to have presaged our own times.

Because Nijmegen is, today, nothing if not a market town. I don't think I've ever seen such a concentration of shops, stores, restaurants, galleries, bars, and cafés in one place. Nijmegen isn't really very big: its within-the-old-walls (long since cleared, of course) commercial district is a half circle, the Waal forming the straight side, little more than a thousand meters across; you can walk across town in ten minutes, if you don't stop somewhere for a beer.

There are only four or five major streets, for most of their length mostly given over to pedestrians; and these are lined with literally scores of competing stores: shoes, dresses, and cell phones apparently accounting for well more than half of them. Across the street from our hotel is the V&D department store; on the corner next to our hotel is the H&M clothing store; half a block away is the C&A. These stores seem to put more energy into loading and clearing their shelves than they do into thinking up names for themselves.

Thousands of people, all apparently with disposable money, spend their time shopping, more and more frenetically as closing time approaches: and then they all descend on the terraces of the bars and restaurants and cafés. And these are indeed very pleasant, with their mineral waters, and beers, and wines, all reasonably priced, cold, and easily had. (Even the water from the tap is delicious: we've never tasted better municipal water, anywhere.)

Eating, then: Wednesday night at the hotel; Thursday afternoon at the Voorgrachtershuis (delicious fish); Thursday night at the Vlaamse Brasserie (marvelous calf's liver); Friday night at an amazing restaurant, Plaats 1; Saturday lunch a haringsbroodje at the market; Saturday night vitello tonnato and lamb chops at Pasta e Fagioli. I'll get around to a more detailed account of Plaats 1 one of these days when I write about it, and Altena, and De Twee Gezellen; these are the best places we've found so far outside of Amsterdam.

We knew that Saturday was market day in Nijmegen, and wondered where the market would be. After going to bed I heard a buzz of preparation outside our window, and after a while woke up enough to have a look: neat stacks of lumber had been set out in stacks, evenly spaced every hundred feet or so: looks like these will be the stalls.

Later I was awakened by a God-awful racket, and looked again: three rowdys were running down the Markt, jumping on each stack and scattering the lumber every which way, and roaring as they did. "Roaring drunk" has rarely had so visible a demonstration. I looked at the time: 5:36. I shrugged, mentally, and went back to bed.

It was one of those typical markets, running up and down the Grote Markt from the Museum to the end of the Markt. At the museum end mostly food -- fruit, produce, meat, fish, spices, bakery items. Toward the Markt itself there came the tools, electrical items, yardage, socks, blouses, and miscellaneous items -- crafts from Africa, old postcards, DVDs and the like.

Across from the hotel, next to V&D, two young men ran a draiiorgel, one of those calliope-like organs with animated figures striking triangles and tambourines in front of a highly decorated panel, and behind it mallets beating on snare and bass drums and a wood block, and sets of wooden pipes providing the melody and harmony, all responding to seemingly endless folded chains of wooden panels with holes cut in them to allow compressed air to activate it all. The young men shook their tin cups of change rhythmically to the music, which ran from soft rock to Strauss waltzes to those incomprehensibly serious Dutch marches, and engaged in conversation or occasionally argument with bystanders.

Further down, at the end of the market, there were two big fish stalls, and there we had our haringsbroodjes. There is nothing more delicious: a fresh raw herring, about five inches long, split before your eyes and gutted and cleaned and set in a soft hot-dog bun and drowned in chopped sweet onion. Well, yes, there is: the same herring without the bun, dredged through enough onion to stick to it, and taken with a small glass of jenever, that clear tasty Dutch gin: but you don't get gin at the market with your herring, and everyone these days eats them from buns; I don't know why.

There's more to say about Nijmegen, of course. The nice bar De Fiets ("the Bicycle"), where we had our drinks that first day we were there, and were served by a young man named Frans who spoke French to us for some reason, and stayed with it when we returned the language, and told us a lot about the town. The waiter at Het Poortgrachtershuis who had so much historical information. The search for batteries and a cable for my Palm, and the excellent blue shirt, and the funny byplay at the Vlaamse Brasserie where one diner's order on its little piece of paper fell from the cook's lineup of orders, and was covered by plates, and almost spiked as already filled when it finally turned up, all while we watched wondering what would happen next.

The walk about town and along the Waal quay, and in the Valkhof park where the Roman fort stood so many centuries ago; and the excellent bookstore at the railroad station, fancy a bookstore so complete and well-stocked at a railroad station, you don't find such a thing at many airports in the States.

And so on. But that suffices for now, and later I'll contrast all this with what we found in Beek, yesterday and today.
Posted by Charles Shere at 2:42 AM