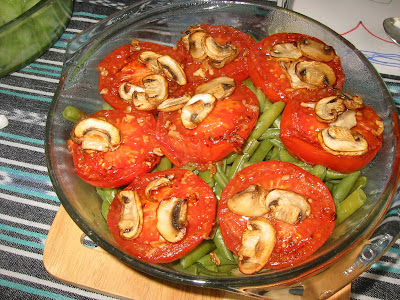 Looking over the recent photos, I find there are a couple of new restaurants to write about -- both for their own sakes, and for what they have to say about the business in general -- and human attitudes in general.

Monday night we went to the Apeldoorn music-and-theater center, Orpheus, to hear Frans Bruggen lead the Amsterdam Conservatory Orchestra in a Schubert concert. The publicity had promised the symphonies no. 7 and 8, and I was excited: I assumed we would be hearing the neglected symphony in E major, reconstructed a number of years ago by the conductor Felix Weingartner -- a delicious piece that I've never heard live (and haven't heard otherwise for years, as my tape has long since disappeared).

Oddly, when we picked up our programs at the concert hall and saw they were in fact playing the Unfinished and the "Great" C Major -- numbered 7 in the old days, but re-numbered as 9 many years ago -- I was just as excited. The Ninth is, in my view of things (which is strictly personal), as perfect a symphony as has ever been written. True: this was an orchestra of students. But it stood to reason they'd be unusually advanced students, and Bruggen is a conductor of great interest.

I first knew of him, forty years ago, as a recorder virtuoso, one dedicated as much to contemporary, even avant-garde music for that instrument, as he was to the historic repertoire. Years ago he matured into a conductor, though; and his work with the Orchestra of the Eighteenth Century has done much to revitalize that repertory. We heard him with that orchestra years ago in The Hague, on an exciting evening, and we were sure this evening would be up to that memory.

After dinner -- a delicious one that Anneke cooked: home Dutch cooking: green beans with tomatoes and mushrooms (my mother would have left out the mushrooms: I prefer Anneke's version); Dutch beefsteak, cooked well-done and served with brown gravy and potatoes -- we mostly walked to Orpheus. At this hour in Apeldoorn the twilight is taking its own sweet time; the birds are still calling; ditto the church-bells. We stepped out of this twilight into the foyer, with a nice little restaurant along one side, comfortable chairs and tables at the café and a desk with a display of CDs, presided over by two clerks from the downtown music store.

Lindsey pointed out one of them as the clerk I'd bought a CD from a few days ago. (She has a much better memory for faces than do I.) I joked with him about the Symphony no. 7-Symphony no. 9 problem. No, he said, no Number Seven tonight, and no Weingartner either. You should buy the album, he said, pointing to a four CD set of all the Schubert symphonies (except the elusive no. 7) with Bruggen and the Orchestra of the 18th Century: only 30 euros; four CDs. I resisted. I may regret that.

Then we took our seats. The big hall at Orpheus, the one used for symphony concerts, seats about 1300 people, and has excellent acoustics. The orchestra was already on stage, playing that piece of mine I always love to hear, the one where everyone is working at whatever it is that concerns them at the moment -- the first oboe, for example, playing solos from the Mahler Ninth.

A good-sized orchestra; first and second violins at opposite sides of the stage; no risers; young musicians.

Then Bruggen slowly made his way to the podium, looking not terribly well and a little frail; and took a seat on a high chair on the podium, and holding his white hands in front of him, no stick, after looking over the orchestra to be sure everyone was ready, gently gave a downbeat for the "Unfinished."

A program note in German -- a language I cannot cope with -- suggested that this symphony is in fact complete, and has a program -- something about sorrow and lack of achievement and nevertheless getting on with it. I can't follow this sort of story, Hans said; neither can I, I answered; it's just sounds, just music; it's not a novel.

The orchestra played without vibrato, but without that curious swelling tone that disfigured (to my taste) so many "historically informed" performances thirty years ago. Bruggen's conception was slow, lyrical, subdued except for considerable bite at the discords, those amazing seventh and ninth chords with which Schubert articulates the unfolding of the otherwise over-familiar first movement.

At intermission we were a little excited: the "Unfinished" had been given new life. What does the C Major sound like, Anneke wondered, and I sang a little bit of it -- though once you begin that horn call at the opening it's hard to stop.

We filed back in to hear Bruggen's version. He respected Schubert's architecture, again in my opinion: slow introduction; accelarating bridge to the first movement which is nevertheless somewhat slower than the second movement; fast and somewhat desperate scherzo; impossibly fast finale growing even faster in its closing passage. He took all the repeats. The piece achieved its "heavenly length," in Schumann's famous description; and also his suggestion that it's a musical equivalent of a novel in four volumes.

There so much in this music -- so much human activity, so many events, such great long-spanning architecture. Yet it's all so incredibly personal -- it speaks more readily to each individual listener than it does in generalized terms. And, of course, in each of its movements -- even the scherzo -- it so perfectly a walker's symphony. The tempi are those of a walker, and of a walker of long distances. It's the perfect piece to hear in a week of vacation from long-distance walking. In this it suggests Bruckner, of course: late Schubert and Bruckner have to do with quiet walks through long distances: the differences between them have to do with the terrain traversed: Schubert walked through the city and suburbs of Vienna; Bruckner through the Austrian countryside. (Erik Satie, bless his heart, walked through the nocturnal streets of Paris.)

That was Monday. Last night, Wednesday, we went back to Orpheus for another evening of music -- completely different in one way, completely similar in another. The piece was Henry Purcell's opera (to John Dryden's and William Davenant's text, very loosely indeed based on Shakespeare) A Tempest, performed -- absolutely splendidly -- by Barok Opera Amsterdam, musical direction by Frédérique Chauvet, staging by David Prins.

The piece is three hundred forty years old, or nearly. But it spoke directly to the audience, and the audience was by no means uniquely prepared to hear ancient music. Three strengths put the piece completely over the top: the utterly engaging story; Purcell's ineffable melodic invention; and the simplicity and perfection of the performances.

Dryden and Davenant forget all about the philosophy and politics of Shakespeare's play, and concentrate on what is normally the secondary business: the awakening of love in the young couples; the clowning drunkenness of the sailors. In this version, Prospero is a woman; Miranda has a sister; Caliban is in fact a local boy who's never seen a woman (other than Prospera. Ariel is the one personage true to Shakespeare.

The orchestra was a significant part of the action: six violins and violas, a lute and theorbo, an obe, a bassoon, a bass viol and a harpsichord, standing (save the basso continuo, who would have found it impractical) while playing right center stage, all wearing sailor striped blouses, blue suits, and (this very engaging) boat shoes.

The five actors spoke their lines in Dutch translation (David Prins provided that too, and it sounded okay), and were doubled by singers (two sopranos, tenor, baritone, bass). There was plenty of physical action -- fooling, mugging, genuine pathos, seriousness -- to portray the wide-ranging emotional content of the piece; but it never upstaged the music. And the musical performances were absolutely outstanding: every singer was flexible, true to pitch, expressive through the range of comedy and pathos; and every instrumentalist seemed completely the master (or the mistress: like the Conservatory Orchestra, Barok Opera is gender-balanced) of the music.

What emerged from this riveting but genuinely entertaining evening was, for me, one overwhelming fact: Purcell's amazing melodic invention, riding his almost as amazing harmonic concept. Sudden seemingly unprepared modulations, foreign keys, abrupt major-minor shifts -- yet beyond them those scales and leaps and arpeggios taking his singers through incredibly long phrases, repeating, repeating the words, embroidering their verbal meaning with allusions far beyond words.

And what came of that was the thing that unites Purcell and Schubert: their fundamental innocence, their good cheer, their generosity of spirit. This is something they share with Mozart and Satie and, I think, John Cage, and with so few other composers. They're not in business for their egos. They're as amazed at the beauty they discover as we fortunate listeners are. They are, I think, in a way, angels, Ariels. How lucky we've been to share two evenings in three days with them!

The two restaurants of the last two days have revealed the same lesson, adumbrated as the title of today's blog -- itself taken from a translation I love (by Donald Slavitt, I think, though I'm away from my books and can't swear to it) of Hesiod's The Works and Days:

Give is a good girl; grab is a bad one.

I don't mean to say that Tuesday's restaurant, Gijs en Katrien (van Kinsbergenstraat 4, Apeldoorn, tel. +31 055.576.7484; www.gijsenkatrien.nl) is only in business for what it can get. It has its strong points, or the guide SpecialBite.com (which I've wrongly called "Simple Bites" previously) wouldn't have listed it amont the top 100 restaurants in The Netherlands. (Number 93, if you really want to know.) The room is beautiful and serene; the reception warm and appealing; the menu ingratiating.

But the service was amazingly slow. Not only slow, but inattentive. One young man, Gijs perhaps, clomp-clomp-clomped through the room, striding in impossibly loud shoes, but never looked your way once the order was taken. A slender young woman, the only other waiter, was similarly reticent. When I pointed out that another table was finishing their dessert and we hadn't yet been given our main course, Well, yes, the young man said, That's because they started eating before you. But they were seated long after we gave you our order, I countered, with logic that seemed to make no impact at all.

We complained to the girl about our delayed main courses. It hasn't yet been an hour since you received your appetizer, she said; we're well within acceptable limits.

The food was reasonably good, though a little too trendy, I thought. There was little warmth or generosity. The coffee wasn't very good. We weren't pleased.

Next night we ate at a new restaurant, Sizzles (Koninginnelaan 37, Apeldoorn, tel. +31 055.578.9292; www.sizzles.nl), and the difference couldn't have been more profound. The host was easy, comfortable with himself and with us, affable. The waitress was enthusiastic and cheerful almost to a fault, happy and genial. The service was attentive, the courses followed easily with a relaxed but efficient pace, the servings were generous, the amuses-gueules and dessert lagniappes (why no English words for these pleasant little freebies?) prompt and surprising.

One restaurant seemed to say: We're very good; we're excellent; you're lucky you chose us; we'll deign to provide you with something.

The other said: We love being hosts; we're glad you came; we want you to come back -- because we enjoy doing this, sharing pleasure with you.

You can keep your grab: give me give every time. It's good for both sides of the equation.
Posted by Charles Shere at 1:18 PM