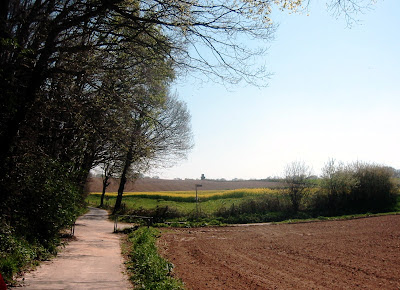 We'd scheduled the end of our walk for Friday the Thirteenth: we are not overly superstitious. And for the short walk we had company: Petra drove over from Ede to join us. She picked us up after breakfast and we drove to the bus stop in Ubbergen where we'd ended the previous day, but we somehow took a wrong turn and drove through that tony neighborhood we'd walked the day before, then on farther, past St. Martienskliniek where Lindsey's foot was X-rayed seven years ago when we first began walking in this country, then into the rich town of Berg en Dal, finally back through Beek and to the bus stop.

This final stage of the walk occupies three pages in the map-guidebook, which traces a twisty route through the forested Wylerberg, a ridge rising from about ten meters above sea level -- the plain on either side of the Waal at this point -- to sixty meters or so at Duivelsberg. (The name means "devil's peak".) Sixty meters doesn't sound like much, but the ridge is steep; in some places the trail can only proceed by means of a series of steps. And there's a significant change of fauna, as we move from mixed hardwood forest, mostly beech and, increasingly, birch, to pine woods.

At only one point did we find the trail confusing, in spite of the tree cover and the frequent turns and switchbacks. Here, though, we quickly got back to the marked path. and before long we were walking on a gentle downhill road through the Filosofendal, the "Philosopher's dale," with its farmhouse, pasture (with Shetland ponies), a curious sinkhole-pond reminding us of the constant presence of unseen ground-water, and a tall white-painted post dedicated to peace and amity marking the Dutch-German border -- which in fact lies a few hundred miles away.

Then there was a final steep climb to today's lunch spot, the Pannekoekenhuis de Duivelsberg. We'd been here before, twice, when walking the Pieterpad, which crosses The Netherlands north to south. It's a popular spot; people bicycle or walk or even drive here from nearby. They come in such numbers that poffertjes are not available on Sundays; too many customers for such complicated preparation.

But we were there on Friday, Friday the thirteenth, and Lindsey ordered poffertjes along with her ham-cheese tosti; Petra had her pancake and so did Giovanna; and I had yet another uitsmijter, the best one of the trip so far: an uitsmijter drop en drang, one with everything thrown onto it: roast beef, ham, cheese, the three eggs, a salad on the side -- though I did request they withhold the ground-meat-thing that would otherwise have topped it all off.

Delicious. And then came the mistake: for whatever reason instead of going on to finish the Lingepad we turned ninety degrees off and joined the Pieterpad, which we've already walked. This took us down a steep path, and no one wanted to turn round and go back once we'd got to the bottom and discovered our mistake. Nothing to do at this point but walk on, through the gate at the end of the Wylerbergmeer, a small long-and-narrow lake, and entering Germany, walking a familiar path to the little town of Zwyllich.

Here, though, we left the Pieterpad, turning south instead of north, and walked on to Wyler, a slightly bigger town which does indeed lie at the end of the Lingepad. The town is pretty in a provincial way, climbing a hill to a church and the main road, where we found a café and a bus stop. Time for tea; then the bus back to Nijmegen.

I won't write here about our Saturday in Nijmegen; time enough for that later. Yesterday, though, Sunday, we packed up and checked out of our Hotel Atlanta and took a bus to Beek, where we'd decided to spend one night in the prettty Hotel 't Spijker; and after checking in we walked to the foot of that steep road where we'd discovered our error on Friday, and walked up to Duivelsberg for lunch -- pannekoeken this time, apple-raisin for me -- and then walked the last two kilometers described in the Lingepad guidebook.

We're glad we did. We walked first through the pine forest; then down a lane between forest and pasture, crossing into Germany imperceptibly until soon, at the top of a hill yellow with mustard flowers, we noticed an odd watchtower, two little windows at the top looking like eyes. We continued past farmhouses, around another pasture, and there we were, almost unexpectedly and somewhat anticlimactically, at the bus stop.

The bus wouldn't come for two hours -- we just missed one, and it's Sunday, and they're few and far between. So we walked back along the main road, another three kilometers perhaps, and cleaned up, and took a nap, and enjoyed a slow dinner at the hotel, and now I'm pretty well caught up with these dispatches (save one on restaurants, and another on Nijmegen), and we're about to catch a bus to the train station to begin the next week of this wandermonth.


Ochten-Wyler Photos
Posted by Charles Shere at 12:44 AM