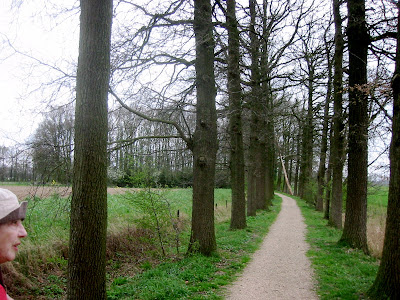 The road to Hemmen

Over breakfast (as usual: hardboiled egg, cheese, meat, gingerbread, roll, white bread, brown bread, jam, coffee, but an orange instead of juice) we hear a little of Mevr. Quint's history. Her husband raised milk-cows, but he died ten years ago, and the cows are gone; only a few chickens are left. (Our eggs are their contribution.) That's her cousin visiting her; she lives up in Arnhem, but visits once or twice a year.

Regretfully, almost, we decide it's time to hit the road again, and I ask for de rekening -- the bill. Forty-five Euros, for two rooms and breakfast. It seems absurdly cheap. Wouldn't fifty be better? She smiles shyly but thankfully, and I hand her a fifty-Euro note.

In a moment Hans arrives, having driven down from Apeldoorn. We drive to the nearby bus stop on the outskirts of Ochten; he parks nearby, and we set out toward today's goal, Hemmen. This took us back through Ochten and then the Waal. We walked first along a good-sized harbor protected from the river by a long bar; but soon the dike was set away from the river by only a narrow strip of pastureland, almost all of it put to good use. Many cows, of course, only a few of them the "sheet-cows," so called because they are black with a white patch like a sheet thrown over their backs.

Shetland ponies seem to be a big business here, though most of them are found farther from the river, in twos and threes in people's yards, or on bigger farms that seem to specialize in them -- one wonders what the market is for all these animals.

After four kilometers or so our map-guidebook promised us a pannekoekenhuis -- with the excellent name "De Strooppot," "the syrup-pitcher," it didn't seem it could possibly miss. When we drew near it though -- it stands isolated on the dike-road where another road branches off -- we were disturbed to see no cars parked, no sign of life beyond one complacent householder watering his garden. The pancake-house closed five years ago, he told us; we'd have to walk on, hungry and thirsty.

Oh well. Three kilometers more and we'll come to Dodewaard, not a very promising name (it looks like "deadward" to me, and indeed it's the home of a thankfully decommissioned nuclear generating plant); there another café is promised.

Along with something you don't see every day: an 11th-century church, which turns out to be a beautiful one, Romanesque in its northern way, brick of course, with a Roman sarcophagus-top embedded in its tower, who knows why.

Even stranger: a walled animal-garden adjoining the church is home to four albino wallabies, a disgusting sight -- perhaps they were laboratory white rats subjected to disturbing genetic-material accident by the power plant when it was in operation.

Our walk led us past them and through a pleasant wooded park, and we came out at a gate where two housewives were having a conversation. Oh no, they said, the café closed some time ago, there's no place to eat in Dodewaard, at least nowhere near this part of Dodewaard. But there's always de Engel, de oudste herberge in Nederland. We found it on our map just a little off our course, and lost no time getting there.

It may not actually be the oldest auberge in the Netherlands, and in any case it's been entirely rebuilt and updated; but we had delicious pannekoeken here, and then a fascinating talk with the chef-owner. He'd bought the place just before the 1993 flood, which wrecked the place even though it's not actually on the Waal but rather on a backwater; and he vowed that such a thing would never happen again.

He installed heavy-duty concrete posts at intervals around the terrace of the restaurant, with slots to accept heavy hardwood planks which otherwise function as floorboards in the patio. When the 1995 flood threatened he had his chance to try this out. It'll never work, the villagers told him, but he watched as the water rose to within inches of the top of his flood-fence, and be damned if it didn't hold; no water came into the building.

He showed us photos of the flood, and they convinced us. How do you seal the boards in the grooves in the concrete posts, I asked; what keeps the water from seeping in? He smiled a little sheepishly. Horse shit, he said; we seal it with horse shit. It's not very nice for a restaurant, I suppose, but it's better than floodwater.

On, then, to the Hemmen-Dodewaard railroad station where Hans left us; and on then another three kilometers to tonight's bed, in a new B&B in the charming town of Hemmen, well away from the river. A church and perhaps a dozen houses owe their tranquillity to the Van Lynden family, who owned almost everything around here from 1375 until 1931, when the last baron, Frans Godard, died without issue, leaving it all to a foundation.

The castle garden was still closed for the winter, warm and early though this Spring is; but we slowed our pace, grateful for the shadow of immense elms and the quiet of a very sleepy village; and we easily found our B&B, a new one we'd found on the Lingepad internet site.

It's in a new house, one of five row houses recently built on the edge of the village, and exactly on the Lingepad itself. Here a retired seaman and his wife have a pleasant home downstairs and two huge rooms to rent out upstairs; and here we slept very well indeed.
Posted by Charles Shere at 1:22 PM