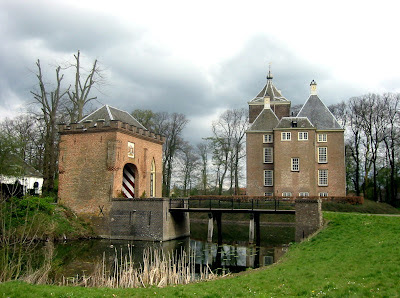 The little town of Buren is beautiful, quiet, and uneventful, a rectangle of staid handsome buildings almost entirely surrounded by what amounts to a moat. Ours was the only hotel, and it was closed: on arriving yesterday we'd had a beer at a table outside, watching the bartender toss bits of stale bread to the ducks; and there'd been a fellow to give us our keys, and improvise a garret room for Therese (who found dirty dishes in one of the cupboards: we think staff had been living there); but this morning at seven, and eight, and 8:30, there was no one with breakfast; it didn't appear until nine o'clock.

No matter. When it did appear we made short work of it, and hit the wandelpad at ten o'clock, as usual. A quiet country road took us past the allotment gardens along the Aal, I think it's called, the east boundary of the old town, and then turned southerly. We soon left it to take a long detour around a very big field planted, I think, to grain; and we left the path halfway to step into the village of Erichem, there to find a village bar where we could have our morning tea. Dart-boards on the walls, a couple of villagers smoking over their coffee at a front table, big, smiling, plain-faced barmaid to bring us our tea.

And then on through farm country. We're far enough north here that the farming seems to be mainly livestock and grain, perhaps alfalfa or wheat or in some cases sorghum; I'm too far removed now from farming to recognize these shoots this early in the season. In any case, no orchards to speak of, though the occasional cluster of old apple trees is already farther along, often in full bloom.

We were passing KIerk-Avezaath, which lay a quarter mile to the south, and approaching Zoelen, with its beckoning castle grounds, and before long we crossed a ditch on a narrow plank, one handrail thoughtfullyy nstalled alongside, and walking down a footpath alongside a double row of young beeches. Quite a way off there was a parallel double row, and when I walked out onto the sward between I discovered this was an immense allee in the making, and the Kasteel Soelen was their distant object.

Our path took another detour, though, to take us along three sides of the castle grounds, on a path through old beech forest surrounding what seemed to be deer pastures, though we never spotted any deer.

These Dutch "kastelen" are not fortified castles but country palaces, built for the most part in Holland's Golden Age, the mid-seventeenth century. They're invariably surrounded by moats, and perhaps defense was part of the reason for that: but the effect is always more ornamental and symbolic than cautious. The Dutch Baroque was too Calvinist to go in for much fancy ornamentation when it came to the design of private buildings, and these buildings are nearly always regular, rather plain, with straightforward brickwork and steep, black roofs. Pride of detail shows subtly, in such touches as quiet little caps finishing the roofs, or (as in this case) heraldic painting on the castellated gate-house.

We stopped at the south end of Zoelen for a coffee and appletart, this in a nineteenth-century roadhouse, perhaps an inn in its day, still preserving the intimate, domesticated appeal of its rooms. We sat on the terrace, of course; the Dutch don't waste these fine clear days sitting around indoors; and that was a pity, because there's an appeal in the relaxed, spacious, orderly, well-proportioned rooms that seems to me utterly missing under the parasols on the terrace.

Also south of Zoelen was a fine restored windmill, De Korenbloem (the word simply means wheat-flour); and in it a cheerful, outgoing man with a clear voice and an engaging manner led us up the stairs and ladders, explaining the ingenious mechanics by which wind-power raises grain to the hoppers, turns the various shafts, ultimately turns the huge, heavy stones, milling the grain.

Like the Argo, the mill is continually renewed; some of the heavy timbers have to be replaced every two centuries or so. It's interesting to contemplate the mind of the men who built these things in the first place. Clearly they meant their mills to last for years: but centuries? Did they really design for a future that distant?

And how fundamental an upheaval did they cause to their immediate culture? One big windmill like this one must have forced the closure of scores of smaller mills, operated by animal- or manpower. What did those workers then do? What happened to the local economy? We think of industrial agriculture as something fairly recent, but here's evidence of the same problems we know having been faced centuries ago.

We tried discussing much of this with our host, an affable man used to change and upheaval -- he's eighty years old, and tends this mill as a volunteer, one of scores of volunteer mill-docents throughout the country. Yes, he said, of course there was an impact on the economy, but that's the course of history. (I like it that in Dutch the word is not "course," which suggests racing, but "loop," the word for walk, a word we spell "lope.")

We walked on, crossing the Linge one more time, loping to a gas station outside the town, and catching a bus into the town of Tiel. There's no handy hotel or B&B at the end of this day's stage, and fearing crowds on Easter weekend I'd reserved rooms in 't Veerhuis ("The ferry-house"), a hotel across the Waal in the town of Walmen. We get there by ferry, and the last one leaves at 8:30, and friends are joining us there for dinner; so we walk through the pedestrian streets of the old part of town, find the ferry-landing, and cross the broad Waal.
Posted by Charles Shere at 9:06 AM