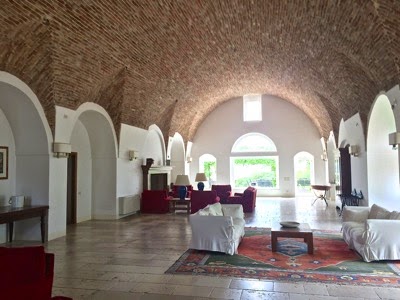 Viale Villa Pamphili, Rome, May 24, 2015—
TO CONTINUE WITH notes on agriturismi, farm holidays in Italy. Our third, also chosen from agriturismo.it, was again very difficult to find, and this time the problem was, I think, Google, whose map led us to a very unpromising building out in the countryside outside the hill town (but they seem all to be hill towns here in Basilicata) of Bernalda. There we had dutifully driven, and found nothing; we drove on through Bernalda, thinking it might lie outside of town a little further up into the hills; but again found nothing.

Finally Google Maps brought us to this ugly building, quite close to its dusty country road, with a locked cancello through which we say a dooryard littered with broken-down motorbikes, an old car or two, perhaps an abandoned refrigerator, an abandoned washing machine, bits of agricultural junk. No one in sight; not even a dooryard dog.

We had driven in to Bernalda on an errand: Lindsey wanted an Italian SIM chip for her telephone. Oddly, my telephone rang as we drove into Bernalda: a woman spoke quickly to me in Italian, saying we’d driven too far and had to turn back to get to tonight’s agriturismo. How did she know we’d driven too far? How did she know where we were? A total mystery, a vaguely creepy one.

But it gave me the opportunity of telephoning back. A man answered and described exactly what we must do: return to the main road toward Metaponto, on the coast; follow it to its first fork, turn left there, look for a little blue car…

So we did that: we found the main road toward Metaponto and took it for what seemed too long a time. Finally we pulled into one of those little roadside pull-outs where drivers stop for a moment to answer the telephone, or a call of Nature, or, in some places, negotiate a service with a professional woman. I noticed a little blue car in this pull-out, and was a little surprised to see it pull away slowly as we began to park. Could this be our little blue car?

A man’s arm appeared through the driver’s window, beckoning us to follow, and we did, of course, soon turning across the main road to turn into an unpaved road that led, before long, to a graveled driveway up a hill between forest and olive grove; and then there we were, parking in front of an imposing, handsome, huge, manorial building.

A smiling man jumped out of his little blue car and gestured to the front door, welcoming us as if we were his best friends, and we stepped into … a mansion. The vaulted brick ceiling arched very high overhead. Big fireplace. Many many leather sofas, arranged for the most part in threes. At the other end, probably sixty feet away, a wall of glass doors leading out to a terrace, then a pergola, then a lawn. 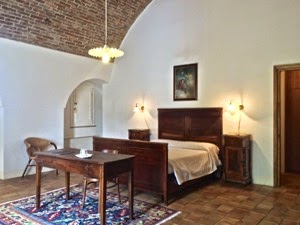 We were shown to our bedroom, an enormous room under its own vaulted brick ceiling, furnished in beautifully polished dark wood, with a big matrimonia double bed, a writing-table and chair, another table at which to have a glass of wine if the weather is inclement — but it isn’t, so we take it out on our own private terrace, comfortably seated in wicker chairs.

Bathroom, of course; armadio, refrigerator. Beautiful linen sheets. Good wi-fi. This is a kind of luxury we are not used to at all, and seems more like a country spa than an agriturismo. Later we are taken up to the swimming pool and tennis courts: if I were forty years younger…

And it is, in fact, an agriturismo; the tenuta produces wine and olive oil; the salon was in former days a tobacco-drying barn, that’s why the iron rings in the ceiling. Vincenzo, the smiling man who’d so helpfully guided us in is a farm worker in the off season, an assistant to the ospiti, the guests, during the tourist season. He is a perfect gentleman, always ready with a smile, patient, sympathetic, helpful, clearly a man who loves his situation.

Much of this information comes a little at a time, some from Vincenzo himself, some from the rather brisker but still friendly woman who seems to be boss. A few old black-and-white photographs show workers proudly grouped in front of agricultural machinery from, I’d guess, the 1950s; Vincenzo’s grandfather and father among them, apparently. Agriturismi, like trattorias, seem to maintain long family histories. I think of the old saw about the down-at-the-heels British squire who takes turns at master and man with his butler; perhaps something like that obtains now in Italy. Fattorie — the word means “farms,” but usually, I think, in the sense of largish farms producing not only fruit, vegetables, wheat, olives, grapes, but also jams and conserves, bread, oil, and wine; the value-added products derived from the raw agricultural products from fields, groves, and vineyards — fattorie perhaps have moved from privately owned farms to corporate ownership, to a fair extent subsidized I’m sure, and subsisting on tourism now as much as agriculture, as tourism has become second only to agriculture in the global economy.

Men like Vincenzo are, then, perhaps a modern equivalent of a bondsman, in a good sense, bonded not by slavery or indenture but by the practical value of having a good job, a fairly secure one, that allows you to enjoy a beautiful and tranquil setting, one you’d never be able to afford as a guest. I suppose the hours are long, but the work does not seem to be grueling.

There seem to be only four other guests, two women apparently traveling with one man and another who (I overhear this at dinner) is a local agent of some kind, taking them through this part of Italy, showing them sites, hotels, agriturismi, which they will then sell to their own customers, for they are apparently tourist agents of some kind.

I take you next to _____, I overhear him say in fluent English, in what seems a conspiratorial voice, you know the film ____, it is where it was filmed, there is a hotel accommodates sixteen guests, yo will have it all, no one else has the opportunity, but we must act quickly or we will lose the chance, I show it to you tomorrow, yes?

There’s something vaguely unpleasant about the guy and about his profession; I silently congratulate myself that we move around from hotel to agriturismo more or less blindly, at the mercy of Google and Waze and the iPhone, wasting a lot of time no doubt, missing out on important sites, museums, works of art; but always fascinated by what we find, and at least in my case preferring our own undoubtedly erratic and even mistaken idea of what we’re seeing to the overly detailed and commercial interpretation of a professional. 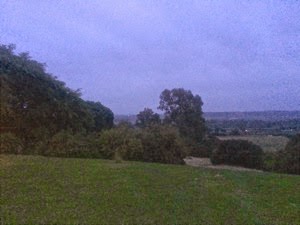 But I will have things to say later about professors and tourguides, The dinner itself was, alas, while authentic to local cuisine, not as compelling as was the previous night’s (which had been, admittedly, a little too rich). You can read about if on the other blog, of course. But the evening, before dinner, had been marvelous; a romantic 19th-century landscape painting of an evening at the site of the Greek ruins at Metaponto, and then our own blue hour from the lawn beyond the pergola…