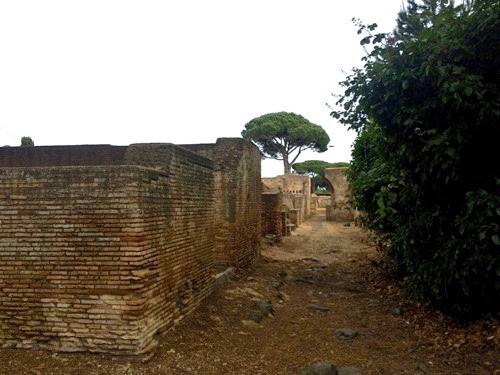 Ostia Antica, May 20, 2015
THE INTENTION WAS GOOD: to make this a journal of a month in Italy, posting every day or two, writing about the roads, the hotels, the mood, the people we meet, the landscape, whatever comes to mind. But any loyal reader there may be will have noticed I’ve been silent for the last five days, and that this brings the total number of posts up to seven though we’ve been here twice that many days. And, worse, as far as I’m concerned, I still haven’t brought you up to date on the agriturismi visited.

It’s certainly not because there’s been nothing to write about. We’ve visited three or four Greek and Roman ruins, any number of fascinating buildings, and the three agriturismi. We’ve seen the trulli of Alberobello and the cave-houses of Matera. We’ve driven across the heel of the Italian boot twice, and today drove through another part of Italy we’ve never seen. I’ve taken, let’s see, eleven hundred photos, and that doesn’t count today.

For a long time I’ve noticed that you can either experience things or write about things; it’s hard to do both simultaneously. I do keep a journal of sorts, but it’s mainly a record of hotel addresses, expenses, the occasional note on a thing or person seen. I rely on my increasingly unreliable memory and, of course, the photos, which function as an aide-memoire and, thanks to the iPhone’s GPS, a record of when we were where. Or where we were when.

For the moment I”ll just write a bit about today, since, tired though I am, it’s fairly fresh in my mind. Last night’s hotel was a pleasant one, a couple of kilometers out of town and above the city (Campobasso), but its breakfast was one of the least adequate we’ve had: no bread, only cake and jam-tarts (though I have to say I do like those apricot jam crostate), and about the worst coffee we’ve had, with far too much milk and that, I suspect, the long-playing kind. So we got out fairly quickly and hit the road, using the iPhone app Waze to guide us to tonight’s digs.

Waze works amazingly well here in Italy, though it’s a good idea to verify the address before you enter it. In another post I’ll try to remember to tell you what happened when we relied on it to get us to our quarters in the Basilicata. I set it to avoid toll roads, which adds an hour to a three-hour drive, and takes you through any number of roundabouts and sharp turns, and small towns and industrial areas: but you drive slower, saving fuel; and you save a lot of money in tolls.

I’ve always liked driving in Italy — whether in cities or in the country. You make use of all the road, and so do the other drivers. You’ll come up behind someone driving 40 kilometers per hour in a 90 kmh zone, usually though not always because that’s all his wretched car will do on the climb. It’s a two-lane road, and someone’s probably coming toward you from the other direction. But the slow guy moves over toward the shoulder and you pass, knowing the fellow coming at you will also move over to crowd the shoulder, and everyone agrees this makes the world better for both fast drivers and slow ones.

The countryside after Campobasso was really beautiful; rather wild at first, with hardly any villages or buildings, just forest, occasional patches of snow lingering on the peaks of the Appeninines, now and then a manicured field. There are red poppies everywhere, and surprising pinkish morning-glories, and miscellaneous other flowers and thistles decorating the landscape. I forget who it was that said flowering plants prove the existence of God: I don’t agree, out of principle, but I know what he meant. Evolution could have come up with something else, and I suppose it might have been nearly as nice; but I’m happy there are flowers.

We stopped at a little roadside bar in Cervaro, near Frosinone, just over the border from Molise in Lazio, for our second coffee, to subdue the lingering taste of the breakfast coffee. The croissants were surprisingly good, and the cappuccinos were too. I listened to the incomprehensible conversation of two or three guys lounging in the doorway behind me, and took a picture of the view and my companion at the table; and posted the photo to Facebook, where now seventeen people have “liked” it — and then, before you could say Jack Robinson, came a “friend” request from someone I’d never heard of (I always ignore such requests) and it turned out to be the proprietor of the place!

Facebook and TripAdvisor, like Waze, have changed the way we travel. Word gets out about things much quicker now, and while the “critics” and “reviews” on TripAdvisor, to take only one example, are often far from reliable (and too often downright crude or snarky), Facebook, since it lets people one really knows trade information and comments and photos, can be very helpful. (It’s also a quick way to show people what you’ve been seeing, which I find, so far, a blog is not very good at.)

We drove through the Rome suburbs, some of them, and the increasing traffic, nosing our way through merges that would be impossible at home, finding our way across highways and the tangenziale, finally parking right in front of tonight’s bed-and-breakfast. Only to find it closed, and a sign on the door saying it would be open between six and ten pm. So we drove out to the beach, reasoning there’d be something there to eat even though it was nearly three o’clock; and sure enough there was a fish-and-chips shop that was quite adequate — you’ll be able to read about it over at my other blog, if you like.

And then we turned to the real purpose of tonight’s stay in this implausible town: the ruins of the Roman port city. I had no idea how extensive they were, and how easily the visitor (once he’s paid a healthy admission, which must keep out the careless) can walk at liberty amont the tombs and streets and ruins of apartments and public buildings. I’m attracted to these ruins because I like daily life, I like the sense that apart from technology humans seem always to have the same desires and the same approach to satisfying them, I like the confirmation ruins give that nothing lasts least of all human aspiration, and that there is a real dignity in futility. Ruins confirm in me my innate melancholy.

But all the time we were walking among the pines and junipers of Ostia Antica, eavesdropping on French and Dutch and Italian tourists, conversing with a clutch of schoolchildren from Normandy implausibly dressed (and so were there adult teachers) in Roman tunics and sandals and headgear — all that time at the back of my mind I was worrying about tonight’s lodging. The place had looked pretty sketchy when i parked there first.

We returned at six-thirty, and the iron gate outside the compound was still locked. A note permanently pasted nearby gave a phone number; I called it; a man said Ten Minutes! Ten Minutes! Yes? and I looked at the time and sat back and relaxed, well, a bit. And within ten minutes he was there, and led me through the gate, through a cluttered driveway sort of affair, and up a flight of outside stairs to the entrance of what had at one time apparently been a private home.

And you know? Our room is really nice, with the necessary bed and chairs, the armoire, good and fast WiFi, a perfectly adequate bathroom, and our own balcony, where I sit at a table typing out this dispatch. It’s twilight now; friendly dogs are barking about the end of their day; a blackbird is uncoiling his liquid song. I’m about ready for something to eat and a good night’s sleep before turning in our car tomorrow and resuming my engagement with Rome.
Posted by Charles Shere at 11:50 AM