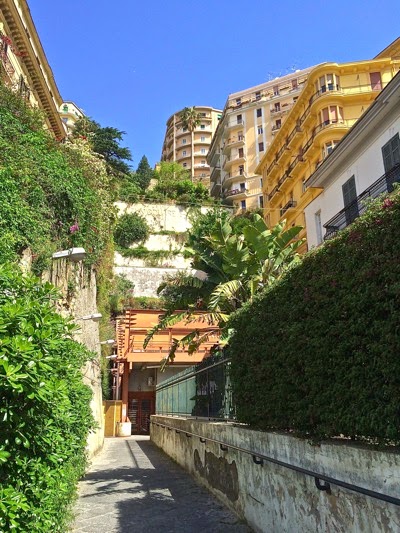 Corso Vittorio Emanuele, May 12, 2015—
OUR BUILDING is on the right in the photo, to the right of the entrance to the funicular: the second-highest, just below the rounded one. The more handsome because somewhat older one just in front of it, with rounded bays at its corner, is the one we take the elevator through, bottom floor to top, to get to the front door of our building. Each of these palazzi, as the Italian quaintly calls apartment buildings, has its concierge, and at the cancello at the street, where the residents drive in, there’s another, a guard really, not a concierge, who sees to it, presumably, that none but residents and visiting professionals come in through the gate.

Well, not the gate, really. There is a gate, but it seems always to be open; instead, the vehicular entrance is barred by a simple barrier, a pole hinged at one end that lifts from its crutch when someone needs to drive in. What the Dutch call a slagboom, a striking pole, like those you see in parking garages. There’s a pedestrian gate there at the cancello as well, also perpetually open as far as I can see, though I haven’t been out late at night.

Our concierge is a woman who sits at the window of the front door of her apartment on the ground floor next to the elevator. It’s the only apartment front door with a window. She is visible from the waist up, and she is always on the telephone, but she always takes not of our arrival or departure, usually with a smile. If she doesn’t smile she must be preoccupied with her telephone convesation; perhaps the news isn’t so good. It can’t be terribly bad, though, because her default expression seems relaxed and benign.

The day we arrived everyone cautioned us on the proper use of the elevators. The cage has a door, of course, on each level, to prevent one’s falling into the slevator shaft; and the car has a door, split into two leaves vertically, I suppose to keep one’s limbs from harm while the car’s in motion. If all these doors aren’t closed quite shut, the elevator does not operate. If we were to leave a door the slightest bit ajar when leaving on the top level, a person at the bottom would have to climb a number of flights to get the elevator. By the time she got there she wouldn’t need it, of course, but she’d be in a temper.

I knew that, of course, I wasn’t born yesterday. Nevertheless the elevator was stuck on our floor shortly after our arrival. I know it couldn’t have been my fault, but the concierge wasn’t convinced. I heard her toiling up the stairs and calling out, and opened our front door, just three steps from the elevator, and saw the problem immediately, and clicked the door shut shut shut. She began lecturing me, in Italian of course, and I countered that since I knew perfectly well how the whole thing worked it couldn’t possibly have been me who left the door ever so slightly not completely shut. But she wasn’t buying.

Still she smiles now when she sees us. I’ve never seen the concierge in the front building, and there is no window on any apartment door on its ground floor; but I know she’s there, probably looking at a video monitor while making her telephone calls. Perhaps she isn’t presentable, and the apartment direction — a committee, I think — prefers to keep her hidden; or perhaps the idea is to keep residents and visitors in a state of uncertainty. But we all know she’s there, and act accordingly; though I never know in which direction to smile as I enter; the camera, if present, is well hidden.

I like the men in the little cabin at the cancello. Their big front window is always open and they frequently stand in the roadway in front of their cabin. They’ll call a cab for you, if you seem incapable of doing it yourself even though they’ve provided you with the number. They aways say Buon giorno or Buona sera, to let you know they’ve seen you and recognized you as permissible. Usually there’s only one man, but sometimes, especially apparently at noon and the next couple of hours, there are two, perhaps to keep one another company at lunchtime.

The other day as we walked out an alarm was going off somewhere, a particularly annoying one, and they were discussing this between themselves, and with anyone who chanced by. The question was, where was the offending alarm? One of our buildings, here at Parco Eva, Corso Vittorio Emanuele 167, or one of the buildings in the adjacent park, whose name I do not know and whose number has escaped my attention? If one of ours, clearly it was their responsibility; and clearly this troubled them; it would be very nice if we could determine the alarme was going off next door.

An old man, even older than I I think, was convinced the alarm was coming from one of our buildings, perhaps even his own. He kept pointing up and to the left. I walked up the roadway, cupped hands behind my ears, and slowly turned my head from side to side as I walked, like a traveling radar antenna; and I was certain the irritating warble came from next door. Hard to be sure, I admitted; there were many surfaces reflecting the sound; the place is full of echoes. It’s a bit like wandering among rocky landscapes in the Alps, where sometimes you must listen very intently to figure out which direction a voice is coming from, or a distant cowbell; and sometimes you begin to understand the irritation a peasant must have felt at the mischievous ventriloquy practiced by local gnomes and sprites.

We were standing there waiting for a taxi we’d called — we’d called the one at 8888, and while we waited many 2222s and even a 545 or two drove past, empty. Surely, I thought, only four 2222s would come by in the time one 8888 would take, but it wasn’t that simple; no arithmetical processes here. And in fact a 545 picked us up, and when I told hm we’d called an 8888 he said it didn’t really matter; he was going by anyway.

By then the alarm had begun to weaken, as if realizing no one was going to take it seriously, it was a bore and an annoyance, nothing more. And when we returned, hours later, it was quiet.

Lst night, though, just as I’d fallen asleep, there was a tremendous series of explosions down the hill in front of our building. I went to the window to see an amazing display of fireworks, nothing going very high into the sky, but many things going off nearly at once, say three storeys above the street. It reminded me of the scene in Les vacances de Hulot, when all the fireworks in a storage shed are accidentally set off at once. I actually saw that happen a number of years ago at a private party in the French countryside on Bastille Day, when as night fell the host was so drunk he decided to set off all his feux d’artifices simultaneously, with the result that it was soon over and everyone was laughing at the consequent anticlimax.

Today I asked the watchman at the cancello what it had all been about, and he shrugged: some Saint’s day, he speculated, or perhaps a wedding. If a wedding, I said, the bride must have been a little nervous. They always are, the watchman replied. Writing like this appears in three of my books: Roman Letters, two month-long stays in Rome; Mostly Spain, a month touring Madrid and Andalucia; Venice: and the idea of permanence, reflections on a couple of month-long sojourns in Venice. Look for them in iBooks or simply by clicking on the title.
Posted by Charles Shere at 9:52 AM