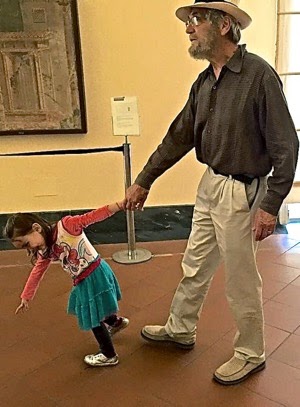 Corso Vittorio Emanuele, May 8, 2015—
I DO NOT NECESSARILY recommend you see the Museo Nazionale Archeologico this way. A four-year-old girl makes a capricious and unpredictable tourguide. But there was little choice: a granddaughter had impulsively flown into town with her husband and two children — the other only six months old or so — and this was our one chance to connect with them before they continued, by bus and train, to Pompeii, the Amalfi coast, Rome, Florence, Venice, the Cinqueterre, and back to Naples to fly home. (All in three weeks. Ah, the stamina and impetuosity of youth.)

We met at the entrance to the Museo, exchanged kisses, and quickly agreed sitting down to breakfast trumped culture for the moment. I wanted to introduce them to cappuccino and cornetti, that curious Italian version of the croissant. But first, a lesson in crossing the busy street.

Down the via S. Teresa delgi Scalzi sped the cars, motorcycles, mopeds, taxis, the occasional small truck, the more occasional bus. It’s a major thoroughfare, and everyone’s in a major hurry. I don’t think Saint Teresa of the Barefoot would approve. I’ve been in her apartment in Avila; I’ve seen her papers, covered with her small neat handwriting. She seems a very orderly, very much focussed woman.

But there is order and focus to this flow of furious traffic. Years ago an acquaintance of ours was posted to a job in Rome, where after only a week or two his wife announced she hated the city, didn’t understand the Italians, had nothing to occupy her own time, and wanted to leave. He was unsure: she wanted to leave Rome, merely, or him? But just in time the shipping container arrived with all the things they’d be needing for the next couple of years, among them their little car.

I’m going for a drive, she told her dubious husband, and off she drove. After a few hours he began to worry, but she turned up in time for dinner. I love this city, she burst out; now I understand the Italians; I’m going for a drive every day. It’s wonderful. You look straight ahead, you’re aware of things around you, you never look back, you take the space you need and give the rest to the others, it’s like a river, it flows.

And that is how you cross a busy street full of fast-moving traffic. The four-year-old riding my chest, her arms around my neck, I stepped into the street with firm intent, eyes right, announcing my purpose to any oncoming driver. Of course one does not step in front of a car too near. The idea is to allow oncoming drivers the time to prepare, to make the slight accommodation needed to adapt their trajectory to the one you are evidently following.

The indispensable requirement is clarity of purpose. One mustn’t hesitate; hesitation or uncertainty communicates unpredictability to the oncoming driver. If you don’t know for certain what you’re doing next, how can he? How then will he know whether to swerve gently left or right, to accelerate slightly or to let up? And how will his resulting uncertainty affect the cars and taxis and motorbikes around him?

Crossing the street like S. Teresa degli Scarpi is like dancing on a crowded floor. You’re all going in the same general direction, though each couple does its own maneuvers within the flow. One clumsy man, one drunk or stumblebum, and the whole thing clogs, slows down; dancers collide; good humor gives way to annoyance; what had been a beautiful poem of motion turns dull and prosaic. (Though perhaps comic, if you don’t have money of your own in the game.)

Same thing in the little bar across the street. Oh, it’s very small, I said with some disappointment, as we approached it: but one of the baristas was at the doorway, No no, he said, not at all, plenty of room. And patrons standing at the bar shifted a bit, others on stools at the ledge moved a little, or finished their coffees and left.

All of them smiled at the children. Touring Italy with a small child is a delight; the children open virtually every door. The customers beamed at them; the baristas beamed at them. The little middleaged lady who inevitably stands between the cash till and the pastry display, keeping track of the customers and the cornetti, she beamed too, and smiled at the baristas’ beaming, and with her own smiling eyes seemed to conduct the little gestures and repositionings and facial expressions that made the whole thing work.

But we couldn’t put off the Museo forever: one must have Purpose as well as pleasure when touring. So we practiced our street-crossing once again, the four-year-old riding the prow, her mother following with the baby strapped to her front, the father next carrying the push-stroller with one hand, the bundles of baby necessities with the other; my own constant companion last, glancing up the street with some apprehension I think; and finally we were back at the Museo, just behind a pack of schoolchildren all wearing yellow baseball caps and little backpacks full of pencils, papers, pamphlets, and perhaps the occasional piece of candy.

The ground floor of the Museo was given over to a celebration in stone of the power and presence of the Caesars. Huge blank-eyed statues of men and women, men mostly, standing mostly, rarely clothed with anything but a beach-towel carelessly thrown over a shoulder, stood at respectful distances from one another, on boxes just about as high as a four-year-old’s eyes. I wondered what she would make of all these bare toes, not to mention the apparatuses a few feet higher. I pointed out the toes, and she counted them on two or three bare marble feet: but you could see that she quickly lost interest in these presences.

I think children prefer the living to the dead, and to the representation too. It’s interaction theat interests and rewards them. No matter how powerful and imposing a presence the statue suggests — and after all that’s the intent of these monuments — the intended effect only takes place within a context in which the onlooker knows and (preferably) subscribes to the power relationship. It’s a political maneuver; and it’s an abstract politics at work.

Children intuitively understand politics, Jupiter knows; they engage in it themselves as soon as they can, before they’re six months old they’re manipulating parents and baristas with chortles, whimpers, dimples and scorn. But they like these relationships confirmed by interaction. They are immediately interested in other babies, who look back at them; in greatgrandfathers, who carry them about and otherwise indulge them; in baristas and museum attendants, who seem to worship them, at least casually. But stone caesars mean nothing to them, because they don’t change their expressions. Children won’t buy these politics: you have to train abstract respect and submission into them.

So the four-year-old tugged at me, urging me from one vast, high-ceilinged, rather empty room to the next; and I enjoyed the tour, taking in not the statuary (though I did glance at it, and admired a portrait-sculpture of a rare matron amongst all these men) but the physical qualities of the rooms — their proportions, their shapes, their light and shadow, even their subtle aromas of stone, plaster, occasional fugitive scents.

And, of course, their acoustics: four-year-olds delight in the sounds of voices, and delight in contributing their own. In fact I think she shared my delight in each of these aspects of the rooms, and enjoyed my own enjoyment. Old men have much in common with four-year-olds, who are quick to recognize this — we have a common opposition (though a gentle one) to the generations in between. Our purpose is pleasure; their pleasure is purpose.

(And yet I think there is purpose in our pleasure. Awareness of space — of proportion of ceiling-height to floor area, of the fall of light through window and doorway, of the timing of echoes and the directionality of sound — is imperative to survival skills in, say, crossing the via S. T. d. Sc. This is probably why a delight in spatial games is instinctual in young animals.)

Of course there was the problem of the others. Not other museumgoers; there were few of them — the yellow baseball caps had moved on, immersed in their training in cultural politics no doubt. And certainly not the occasional museum guard, who looked up from his newspaper or telefonino or meditation with a quick recognition of the presence of a child, triggering the immediate Italian response of a smile, a beaming awareness of innocence and enthusiasm, qualities long since exchanged for a stable position within the social context.

No: it was my own family I was thinking about: my granddaughter, her husband, my wife, all dispersed in various galleries, looking I imagined more assiduously for one another than at these presences. Four-year-old seemed entranced with staircases, tugging me up one, down another; I thought with a little concern of my contessa’s gimpy ginocchio, for she’d hurt her knee the other day and was having trouble with all this walking and stair-climbing.

When her father hove into view I had the idea of suggesting she hide from him, and she immediately found a niche behind newel-post and balustrade where she stood motionless for quite a long time. She’d learned after all from this statuary. From then on, for quite a while, she was no trouble at all: as we moved from one room of Pompeiian frescos to the next she preceded us, finding a hiding place in a corner or behind the rare bench, in some cases even hiding in plain sight by sitting motionless.

Still, these frescos, not to mention their bilingual explanatory labels, require time and attention, and our guide was after all impatient and, let’s face it, a greater responsibility. And her family had an agenda: having just finished the flight from New York to Naples, they had their train to catch to the bus that would take them to the night’s lodging. I cast another regretful glance at a particularly interesting painting, of a king arrested in shock at seeing the one-sandalled hero who would be his overthrowing; and we walked back through the rooms filled with Caesars, and out into the bright day; and down to the Metro station, where we sent these four youngsters on their way.
Posted by Charles Shere at 12:47 AM