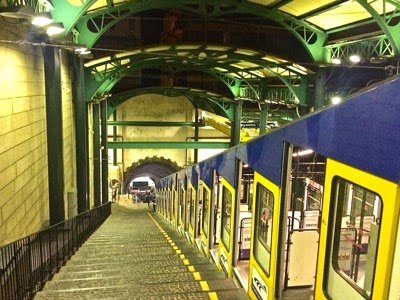 Corso Vittorio Emanuele, May 9, 2015—
BECAUSE STEEL CABLE has a certain elasticity, the car comes to its stop very slowly: then, once stopped, drifts slowly backward, then forward, gradually shortening its drift until completely at rest. In the meantime a few riders have got out, others have entered. The Funicular is like a diagonal elevator, bringing riders from the Piazza Amedeo in Chiaio at the bottom to the via Domenico Cimarosa in Vomero at the top.

Chiaio and Vomero are districts, I suppose you would say, of Naples; newer extensions of the old city, less scruffy (especially Vomero), but not really suburbs, but also not really quartiere — what the French call quartiers and we anglophones know as neighborhoods: they are too large for that, and if Naples were to disappear, as other cities at the foot of Vesuvius have been known to do, then both Chiaio (which would probably disappear too, engulfed by a tsunami of one kind or another) and Vomero (which might not, as it is considerably higher) would go on independently perfectly well, though with neither train nor air terminal.

As I say, Vomero is quite higher, and our Funicular, which is called Chiaia, is really quite useful for getting up there. Or, for that matter, down to Chiaia. Our street, the Corso Vittorio Emanuele, starts off down in Napoli like any busy thoroughfare; but up in our neighborhood it takes on the nature of a corniche, winding along relatively flat on the face of what amounts to a cliff. It makes me think of the Avenue de Cimiez in Nice, or Euclid Avenue in Berkeley: it links two or three quite different zones and aspects of the city, taking on the qualities of each as it does, while respecting geography and, paradoxically, facilitating the handling of traffic.

The Napolitani know how to build on the sides of hills. On the faces of cliffs, even. I’ve mentioned the geography of our own apartment building, one of seven I think in our own little residential neighborhood. It is a vertical geography, measured by stair-steps — two hundred twenty-one — or elevators — five floors in one, two in the other. And then the sloping ramp of the private road. According to the app on my iPhone, there is 180 feet difference in elevation between our apartment (which itself is nearly four hundred feet above sea level) and the cancello, where our private street disgorges onto the Corso Vittorio Emanuele. And the cancello is far above the Piazza Amedeo, and far below the via Dominico Cimarosa up in Vomero. (I’ll check those elevations later, if I think to.)

As trams or streetcars inspired suburbanization in the United States shortly after electrification, say in the early years of the 20th century, by facilitating fast and inexpensive commutes downtown, so these funiculars — there are three of them in Naples — opened up the heights. Vomero, the plateau well above Naples, had been agricultural; its name is said to derive from an old Italian word for “ploughshare”, and it’s still called “the broccoli patch,” a little derisively, a little fondly. It reminds me of Prati, the Roman district just north of the Vatican, a wealthy bourgeois district that was built up early in the 20th century, when apparently much of Italy, or her cities at any rate, enjoyed a degree of complacent prosperity. (A good fictional portrait of the result, in terms of social and family lassitude, can be found in Alberto Moravia’s wonderful first novel, Gli indifferenti, translated most recently into English as Time of Indifference.)

Well: one euro buys you a ticket on the funicular (a euro and a half if you forget to buy it ahead, at a tabacchii or edicula), and they arrive every ten minutes throughout the day, and take you in no time from Corso Vittorio Emanuele where we live down to the bustling Piazza Amedeo, and in only a slightly longer time (because there is one stop between) up to the via Domenico Cimarosa in Vomero. And Vomero is where I spent the morning yesterday.

The evening before we’d dined at a newish restaurant, Partenope, an enchanting little place, and we’d conversed with one of the owners, and hearing of our interest in the restaurant business he invited me to join him in the morning as he went about his rounds shopping for Partenope’s kitchen. I was quick to agree.

Fabio is a young man, nearing forty I’d say, lean and handsome, good-humored and I think patient but with a watchful eye, a good thing in his profession. He took me first, of course, to his favorite cafe, around the corner from his restaurant; and there I had the finest macchiato I’ve ever tasted, rich, dense, chocolatey without a trace of chocolate, balanced, aromatic. And then we hit the markets.

We went first to the local covered market where there was a small fish stall. He introduced me to the proprietor, a man about his age: His grandfather sold fish to my grandfather, he explained. There were small displays — shallow buckets, I suppose you’d have to say — of tiny clams, of mussels, squid, a few eels, and the cleanest, most delicate, shiniest and tiniest alici, fresh anchovies, that I’ve run into. (We’d had some, fried, the evening before: unbelievably delicate and sweet.)

From there, a walk through the Piazza Vanvitelli toward a small street market, open every morning Fabio said, where he looked over the vegetables on offer and engaged in a short conversation whose import was subtler than my defective Italian could catch. We left empty-handed, but that didn’t surprise me; he hadn’t brought anything from the fishmonger either — I suppose deliveries are made later in the day.

Next, the enoteca. The proprietor, Danilo Marra, opened a little late this morning; no one seemed to mind, or think it irregular. He has an astute selection of wine from other Italian provinces and an imposing selection of spirits and apéritifs, but what was really impressive was his selection of local wines, and his knowledge of them. Well, not impressive, perhaps; after all, it’s his métier. I know nothing of these wines, and was surprised that Ischia, for example, barely four by five miles yet housing sixty thousand inhabitants, is a locally important wine producer.

Danilo and Fabio were immersed in a long, subtle, and apparently serious conversation, and I stepped outside, where a lean man in faded blue worker’s coveralls, with a sallow but cheerful face, was carefully but slowly sweeping up a few scattered cigarette butts — yes, there’s still a bit of smoking in Italy, though only out of doors, at least in public. We had a short imperfect conversation. Finding I was from California he mentioned he’d been to Florida for a few months, visiting someone in St. Augustine, but hadn’t found work, and in any case wasn’t able to extend his visa. Why were the Americans so afraid of foreigners, he wondered; wasn’t there plenty there for all? I tried to explain the present mentality about immigrants, foreigners, and terrorists, but he’d been persuaded that Americans are brave and generous, and felt, I think, that his problem in Florida had somehow been his own fault.

Walking on with Fabio I asked about the man. How does he make a living; what does he do when not sweeping Danilo’s doorstep? Fabio shrugged. Is he, I asked tentatively, a factotum? Oh yes, Fabio quickly agreed; and I thought of men like him I’d seen years ago in Sicily, directing me to a space in a parking lot, say, or helping with a package, or something, and then gracefully and subtly — interesting how often that word is necessary to describe an ordinary event on an Italian sidewalk — extending a hand, palm up, for a small coin one will never miss.

There’s no embarrassment in these moments, these transactions, and if a request for a coin is denied, there has seemed to me to be no ill will. We walked past an old woman sitting in a doorway with a shallow cardboard tray: in it, a few coins. Fabio automatically found a coin in his pocket — I wasn’t able to see its denomination — and dropped it into the tray.

Of course it’s his neighborhood; he lives here, maintains his business here. We stepped into the Friggitoria Vomera, where his mother stood behind the display case, and an uncle was frying graffe, big doughnut-like pastries, so light and delicate you almost forget you’ve eaten one, and want to have another. Another uncle is pizzaiolo in a family pizzeria.

We ended our tour in the basement kitchen of a pastaficio, a short, muscular fellow with an amazingly sunny smile, who stood at a big basin of polenta, stirring it with a wooden pole whose upper end was held loosely in a hole cut out of a metal strap extending a short way from the wall. The smooth yellow polenta bubbled softly. and he left off stirring for a while, moving to a work-table on which lay a pile of cooked rice. He tore a good-sized chunk of rice away, slammed it on the table a few times, then stretched it out between his hands, slammed it back down again, and began rolling it into a cylindrical loaf, from which he tore off pieces the size of a small orange, shaping them into balls. Ah: these would be arancini, perhaps to be finished upstairs at the Friggitoria.

Fabio looked at me conspiratorially: You have to see this, he said, and led me down to another room where the pastaficio had somehow preceded us. A huge mound of dough was on the work-table. Again he stretched and shaped a cylinder of dough, a slim one this time, maybe an inch in diameter, and then in a marvelous quick ballet of hands continued rolling it back and forth with his two hands, pinching off a piece with his left hand, rolling it into a stubby cylinder with both hands, and flipping it into one of three shallow pans with the right. Croquettes, Fabio explained, and the pastaficio looked up and smiled his radiant smile, never breaking stride, and the pieces flew speedily and unerringly into the pans…

Later in the day I returned to Vomero, with my companion this time, and we inspected the vast and sober Castel Sant'Elmo: but that's a story for another day. I'll only report now that on our walk back to the funicular we encountered the pastaficio striding briskly in our direction. He flashed me his sunny smile… Writing like this appears in three of my books: Roman Letters, two month-long stays in Rome; Mostly Spain, a month touring Madrid and Andalucia; Venice: and the idea of permanence, reflections on a couple of month-long sojourns in Venice. Look for them in iBooks or simply by clicking on the title.
Posted by Charles Shere at 12:44 AM