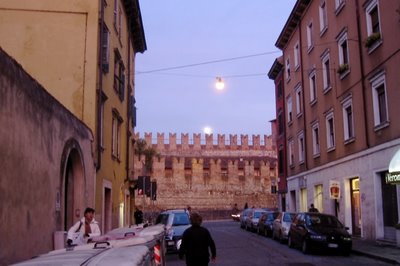 Moon over the castle wall, Verona

WHAT A CONTRAST A FEW MILES make, crossing Italy from Piemonte to the Veneto. We left from Vercello, a city we’d never seen before, sprawling and not all that attractive, a bit like a Stockton (California) holding down its farm country — where half the rice in Europe is grown; the rice indispensable to a good risotto.

We took the train, a fast train stopping only briefly at Milan, Brescia, and one or two other stations before pulling in to Verona, a city we’ve visited often enough to feel at home in — and to notice changes.

Torino, in Piemonte, has changed in the last two years — not surprising, since the Winter Olympics were centered there less than a year ago. But it seemed unchanged, except for a few details. The tempo hasn’t changed; the sort of people you see on the streets; the feel of daily life.

Verona, though, seems busier, glitzier, more heavily touristed — and that’s saying a lot, as it’s always been oddly tourist-heavy. You don’t think first of Verona when you think of tourist destinations in Italy: Venice, Florence, Rome form the eternal triangle. But Verona is the setting of Shakespeare’s most romantic play, and signs everywhere remind you of Romeo and Juliet; and the buses discharge hordes of tourists, with their cameras, at the end of what I always think of as Richard’s Bridge.

That’s the bridge leading from our friend Richard’s apartment, on the Lungadige Re Teodorico (and aren’t you glad you don’t have to give that as your street when you fill out a form!), across to the city center near the post office. The post office itself is now bunkered behind that horrid red-orange plastic web-fencing you see around construction sites these days, as they’re trying to make another underground garage.

Those garages are a good idea in general. They’ve made them all over Spain, and in a good many French and Dutch and Italian towns and cities. Find a plaza, place or plein, dig it up, install a many-level parking garage underneath, and replace the cobblestones: it’ll look no different once you’re done, and it’ll be empty, for the first time in a century, of parked cars; the people will reclaim it, with their benches, lovers, little dogs, jugglers, mimes, pickpockets, markets, and three-card-monte sharks.

Verona, though, is rich in archaeological treasures, and when they dig here they run across them; and then the work has to stop for a while; the officials scratch their heads and think things over; no doubt meetings are held; projects fall behind schedule. So it is at the post office.

(I remember once years ago asking a supervisor on an archaeological dig in a city in Sardinia how they know when to stop. Ah yes, he said, that’s the problem all right, there’s always something a little further down, it’s just a question of how many layers you want to remove.)

We spent only two days and three nights in Verona this time, visiting our friends Richard and Marta. Richard’s an American expatriate; he’s been in Verona forty years or so, supporting himself with translation and editing while postponing for many years his true calling, which is sculpture. Three or four years ago, though, that call could no longer be ignored, and I’m happy to say that he is now in fact a sculptor. He has a few shows under his belt: but what is more important, he makes sculpture nearly every day; he’s prolific and disciplined; and the work continues to grow and at the same time to focus.

What artists do as they mature is narrow in on their true selves as they are expressed in their medium. This is hardly an original idea; I learned it first from the musicologist Peter Yates, who I suspect distilled it from writings of Gertrude Stein, who wrote Slowly there is in them something that is coming out of them, or something of that nature, when writing a poetic portrait of Picasso. That is what Richard has been doing.

We visited his studio, out near the city wall across the Piazza Bra I think it is, the one with the arena. The studio’s on the ground floor of a fine old 15th century palazzo — the word means simply “apartment building” in Italian, but those buildings often seem grander because of their great age — you step through doorways under wonderful carved lintels, and open a wooden door, and find yourself in a room with a couple of windows onto the street, a small kitchen-shower sort of room off the back, and sculpture everywhere: on stands, on tables, on shelves; in plaster, terra cotta, plasticine.

I won’t write further about the work here: when I get a chance I’ll make a webpage. (In fact you can already see a primitive version of one on my website.) What I want to tell you right now is that when we left his studio we stepped out into a particularly lovely evening, the sky going rose overhead, electric wires etched against the darkening blue sky, and from somewhere came the unmistakable sound of swifts. I looked back the other direction toward the Castello. Toward me, as I lifted my camera, came a lady in a dark sweater carrying a plastic bag of garbage.

The Italian streets are furnished with many public garbage-dumpsters. I suppose there aren’t garbage collectors of the sort we have; one simply makes a garbage run every day to leave the day’s refuse in one of these public bins — another item in the Catalog of Appropriate Methodology, like the unpaved streets in Mexican towns, where the climate is so dry asphalt is hardly needed. I waited until she’d made her deposit and turned her back, and then snapped a photo of the Castle, hoping to catch the swarm of swifts noisily going to nest in the one green tree to be seen, there toward left center.

Only later did I realize I should have captured her, too, in the act of getting rid of her garbage; and only later did I see that the full moon rising was conversing with a street lamp.

And now we’re in Budapest, of all places; a very different city, country, and people.

Posted by Charles Shere at 3:09 PM