Budapest 6: Through asperity to the opera 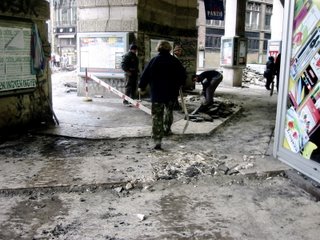 Picking our way through repaving on the Kossuth L.

THE DAY FELL INTO FOUR PARTS: Getting to the Opera; The Opera; After the Opera to the Park; The Park. There’s a fifth part, too, of course, namely dinner and winding down before bedtime, but we can skip that.

This was our last full day in Budapest, at least for this trip — I quickly add that because I’ve decided I could easily come back for another stay. Strange, the number of times I’ve said or thought that, these last few years, about places I’d at one time never dreamed I’d ever visit — Madrid and Budapest for sure.

But the day began with the usual amount of uncertainty, trepidation, mistake, back-pedalling, and all that. After our customary (this week, at least) nine o’clock breakfast the first order of business, believe it or not, was to see a production of Madama Butterfly — like Salamanca and Roermond, something I once thought I’d never want to revisit, but something so insinuating and resonant I turn out not to mind exposing myself to its siren call once again.

But to get to the Opera we needed to take the Metro, and the Metro was not running this morning, at least not our metro, the Red Line: it’s undergoing repairs, like so much of this rather shabby capital of Deferred Maintenance. And it was raining: lightly by northern California standards, but still noticeably. And that meant that the lady who speaks only Hungarian and who sells Metro tickets was not at her card-table with her tray of money and tickets out in front of the closed Metro station, because she wouldn’t have wanted to sit out in the rain. And that meant that we’d have to take a chance and ride the Metro replacement-bus without a ticket, and hope we would not be controlled, because that results in a Big Fine.

But we were only going one stop anyway, because we would have to stop at the train station to correct a little problem that had developed in the train tickets we are using tomorrow to get from here to Vienna. Hans clearly explained to the train-ticket lady that four of us were going to Vienna tomorrow, and two of us were returning to Budapest on the 20th; but on checking the tickets this morning he discovered that she had two of us going to Vienna tomorrow, and all four of us returning the 20th. So it seemed advisable to set things right.

The four of us took two different buses to the train station, because the first was really crowded, but we managed to meet there and conduct a pretty thorough search for an appropriate office of ticket-mistake rectification. This led us to just about every side and level of the station, and ended, predictably I thought, with a lady who spoke only Hungarian who kept saying No Change, and finally Just Go. So we’ll find out tomorrow.

Then it was a matter of getting to the Opera. I insisted on having tickets this time, and that led me downstairs to a Metro station, a tobacco store, an information desk, and finally a ticket window. Next to it two elderly men were boxing, in earnest I would say given their rather fierce expressions. Boxing, stripped to their undershirts, in the drizzling rain, on the slippery terrazzo floor, looking as if they’d been lifted out of the 1930s to the present moment — which, come to think of it, is how a certain amount of this city has struck me all the previous week.

We took the next metro replacement bus, but it took a different itinerary from the expected one, and we got off when we realized it, and hoofed it back up to the Astoria station, where we grabbed a tram — running now on pure intuition and my dependable sense of compass directions — to the old familiar Deak Tér, where we grabbed the little friendly Yellow Line metro, the oldest underground railway in continental Europe, and emerged at the Opera.

We dashed into the building just at eleven o’clock, when the performance was to begin. Oh no, the usher said on looking at our tickets, Not this way, you must go out of the building and around the side entrance and up to the third floor.

Another dash into and out of the drizzle, and up several flights of shallow marble steps, two at a time, and then to the mandatory coat-check where a couple of guys helpfully stepped in front of us just as our turn was finally coming up. I threw down our coats and a 500-forint bill and scooped up the checks and the change and shouldered my way past the usher who was closing the door.

Lindsey and Anneke had gone ahead, and stood and waved, so I lurched down the aisle to join them. We were sitting in the front row of the top balcony, and I accidentally looked down over the railing on my way to my seat: nothing but forty or fifty feet of air between me and the people below. But I got to my seat just before the music began, and Hans arrived soon after, and then we heard and saw the best production I’ve ever seen of this opera, and I’ve seen a few.

Afterward we went to the Artist Café for a sandwich and a piece of pastry — which came, predictably, in reverse order — and then, discovering that credit cards would not be accepted, Hans and I went out to find a Bancomat to take on yet another 10,000 forints, even though we’re leaving tomorrow. And then a continuation on the Yellow Line to the City Park, where Hans took the waters in the Baths, and Lindsey and I took in far too many Spanish and Dutch paintings at the Museum of Fine Arts. And then home by way of a trolleybus, having found the stop without too much difficulty (or, for that matter, too much help from maps, or signs, or passersby); and dinner in the hotel — steak in green peppersauce for me, with a dish of Hungarian pickle on the side (fresh sauerkraut, this is, and delicious), and a glass or two of the local red. And so to bed.

I’ve put more photos of Budapest up on the web, including photos of the flea market, and the opera house, and various other things that find their way into the camera: you can find them here.
Posted by Charles Shere at 1:39 PM