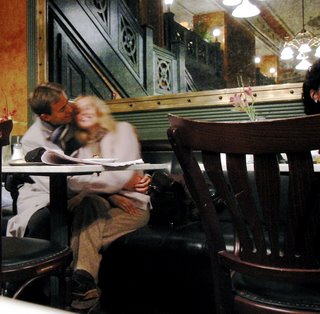 OKAY, EATING. We’ve had four dinners here now, none extraordinary, none particularly Hungarian, none unfortunate. The first was in our hotel: we arrived so wound up that it was time to wind down, and we just stayed in our hotel for dinner.

The Hotel Veritas is on an outlying ring road near a big stadium — the Nepstadion, or “People’s Stadium”: but, as Hans says, they seem to be slowly removing the “Nep” from the name, perhaps because it’s too much a reminder of the communist days here, and it’s slowly becoming simply the Stadion.

It’s not an attractive part of town, of course. We walk a short block down the street to a very wide fast avenue that forms the ring, with a sign pointing to Ikea sixteen kilometers away in one direction, the Stadion across the avenue, a couple of grimy restaurants, and, down a somewhat longer block, the metro station.

But we didn’t explore any of that our first day: we simply stayed in the hotel. The menu was in three languages as I recall, and I had a big salad and chicken-and-bacon on skewers, which was quite tasty. Lindsey had a pork fillet that turned out to be twice as much as she could eat, and we heard the cook pounding away at it, so it was prepared to order. With dinner, local Rizling, as they spell it.

The next day, Tuesday, our friends Hans and Anneke arrived, and we ate at home again. This time, still suffering from too much meat in Italy (I am too old now to eat meat twice a day for ten days), I settled for a Greek salad, an old favorite of mine from college days, and it was good. Someone had told us there were no vegetables in Hungary: that is not true.

Yesterday we ate at one of the places on a list of some kind, the Central Café. We got there early enough to have a glass of wine while waiting for our friends, and to watch the room; and for the first time in Budapest we saw style, youth, smiles. Across from us a pretty girl sat with her telephone, wearing a head of hair the most amazing colors of blonde, red, and strawberry blonde, certainly natural; no one would dye each hair a different color.

Hans and Anneke showed up before long, and I found a grilled duck breast on the menu to follow my obligatory green salad. The duck came with “cabbage noodles,” which turn out to be square noodles with caramelized cabbage-scraps, a very delicious thing; and with crisp-fried thin strips of leek for texture. It was a nicely thought-out dish, and I’d order it again in a minute.

We lingered a bit over the dinner, long enough to see a guy turn up to join the blonde across the way. The young people here seem to be nearsighted for the most part; they hold their faces very close to one another when they meet, often keeping them that way for several minutes. It’s sweet.

Today we found ourselves next to the first restaurant on the Zagat list — first by virtue of its name: Abszinte. The menu wants to be primarily Provençal, and succeeds pretty well; but on the wall was a blackboard with daily specials, and leading the list was rumpsteak with mushrooms for only Ft 1895. Hungarian forints are an easy exchange, you think of them as pennies and halve them, so this was $9.50: even after lots of Italian meat, I couldn’t resist. The steak was cubed and long-braised; it came with lots of brown gravy and nice morels, and enough roast-fried potatoes to smush up with my fork to sop up the gravy. Not at all bad.

TODAY’S AMUSEMENT consisted of a museum and the ballet. The museum was another disappointment: the museum of applied arts, much of which was closed for repairs. Only a few items from the permanent collection were on view, to provide a chronological history not of applied art but the accession activities of this museum — which collected assiduously in the last half of the Nineteenth Century, then slowed down for a variety of reasons.

I’m not nuts about old furniture, but I like five-century-old faience as well as the next man, and there were enough keys and clocks and glasses to keep me interested. There isn’t enough Art Nouveau on exhibit, though there’s a fine Josef Hoffmann side-table and quite a bit of Tiffany glass. There was one startling explanatory label pointing out that in the “difficult days” of the second world war many people, who had to leave their homes, had to leave many of their possessions behind; some of them somehow came into this museum’s collection. Sobering.

The ballet was Mayerling, choreographed by Sir Kenneth MacMillan to John Lanchbery’s arrangment of Franz Liszt music, very well produced and performed at the Budapest Opera House. I’ll have more to say about the house itself later; we’re seeing Butterfly there in a couple of days. Mayerling is hokey, long-winded, and boasts a story plot so complex and arbitrary it can only have been translated from fact: no one could have invented it. But it lends itself well to both costume story and the thinly dramatic music of Liszt, who since he was Hungarian is a national hero here.

The audience loved it, and I applauded too; and then we went out into the cold clear night to catch the metro home. Once again the Rakoczy metro, undergoing repairs, was replaced by a shuttle bus; once again some of us were unsure where to catch it. I asked half a dozen different people where Rakoczy Street was, and not one of them could tell me. One guy said But hey, I can speak English, and he was right, he spoke English quite well: but even though he was a local he did not know where Rakoczy Street was.

Years ago we were in Prague, driving to an apartment house where we would be crashing for a night or two. The street signs were wrong, off by a block and then turned ninety degrees; and when we asked about it we were told they’d been deliberately moved to confuse Russian tank drivers. I think they do that here, too.

Speaking of tanks, during the demonstrations here a couple of weeks ago someone commandeered a tank. Apparently it was prepared ahead of time, as a few locks had to be broken. A guy jumped into it and drove it straight down the avenue toward the demonstraters, then swung around at the last minute and headed for the police. Bystanders said he seemed like a guy old enough to have learned to drive a tank in the war, or perhaps in the 1956 uprising.

The tank only had enough fuel to go 150 meters, so no harm was done.
Posted by Charles Shere at 3:11 PM