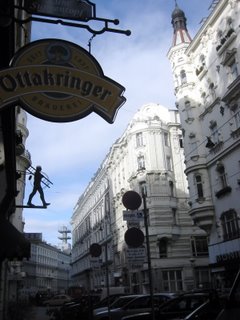 BEFORE ANYTHING ELSE, a couple of additions to yesterday’s notes about A Flowering Tree, John Adams’s opera whose premiere we saw last night. The singers, all quite fine both vocally and as actors, were baritone Eric Owens, soprano Jessica Rivera, and tenor Russell Thomas. The dancers were Rusini Sidi, Eko Supriyanto, and Astri Kusama Wardani.

Adams led the Orchestra Joven Camerata de Venezuela and the Choir Schola Cantorum de Venezuela. The stage design was by George Tsypin, the costumes by Gabriel Berry, the lighting by James Ingalls, the sound design by Mark Grey. I’m sorry I left these names out of yesterday’s notes, but it was late and I was tired. The more I think about the evening, the more impressed I am with all the performances, the composer’s included.

But that was yesterday, and today was a very different matter. It started with a walk down Wipplingerstrasse to the tram, but it centered on the Naschmarkt, the huge central produce market out by the Secession Gallery. “Naschmarkt” means, roughly, noshing market, and that’s what you do there. You buy food, too, of course: meat and cheese, fish and shellfish, fruit and vegetables, pasta and beans, oil and vinegar, beer and wine. The stalls, one after another, offer tantalizing selections. Citrons, jackfruit, pommelo; apples, pears; quinces; starfruit, carambolas, bananas; potatoes, beets, carrots; beans, tomatoes, peppers.

The vendors are Austrian, Russian, Uzbek, Ukrainian, and nationalities too fugitive to mention. Everything was clean and brilliant: we were there from a little past noon until two or three o’clock, and the weather was bright and warm. People sat at high tables, or on café terraces, or stood here and there, eating sausages, sandwiches, schnitzels, fish; Chinese food, Thai food, kebab and falafel.

There were a number of shops featuring “bio” food — organic — and there we bought a bottle of olive oil, a small package of sage leaves, a fennel and some lettuce. At another stand I was excited by a bin of beans, not yet dry, as big as an oval half dollar, each of them a different configuration of speckles, streaks, and spots; maroon, brown, deep red, white, purple, bluish, greenish. We bought a pound or so and cooked them for dinner, dressed with olive oil and sage.

We had meant to have lunch at a place called Ubl, but by the time we found it it was two minutes of two, and they close between two and six, so we were out of luck. We went back to the Naschmarkt looking for a café, but they were all full — it was such a nice afternoon! So we went across the street to an ordinary echt-Viennese joint and had the house special, kalbschnitzel with a bit of lettuce, a lemon, parsley-flecked steamed potatoes, and a glass of the nice fresh white wine that goes down like water but has much better flavor and acid.

Otherwise a lazy day. The Secession gallery was closed for re-installation, of course, but we went down to the basement to see the Klimt murals, so oddly placed; and a historical documentation with photographs on the building, decline, destruction, and restoration of this amazing building — dating from 1898, it looks Cubist; historical in one way, absolutely modern in another.

We stopped in at the Café Europe for a cappuccino — a good one, by the way — and a piece of Sachertorte, also good. And then we slowly made our way home for a rest and dinner. Lindsey simmered the beans for a good forty minutes while we ate our fennel and some ham and salami. Alas, there was no salt in our apartment. I’d thought to buy a small pepper-mill, but it hadn’t occurred to me to buy salt. When we realized it I rushed out again, but the shops were closed. I stepped into a bar, meekly asked if I might speak English, and explained that we were cooking beans, and had no salt: might I have some?

I held out a cupped hand. You can just put a little in here, I said. The bartender had been looking nervously at his salt-shaker, but on hearing this he visibly relaxed. Really, he asked, you just want some salt there, in your hand? Yes, I said; and he shook a half-teaspoonful into my hand, and I managed to unlock the outer door of our building and pull it open, and push open the door onto the court, and pull open the door on the other side of the court, and go up the three flights of stairs and get our own apartment door unlocked, all without losing a grain.

I chopped the salami that was left — not much of it — into the beans, so they’d share its salt; and we flavored them with the sage and oil and black pepper; and then had a lettuce salad dressed with oil and lemon juice and the salt I’d brought from the bar. Too salty, Hans thought: You know, we Dutch sprinkle a little sugar on our salad, that makes it tasty! His eyes twinkled, but we were firm, and he was a good sport. And then tea, and an apple, and time to pack it all in. It’s a pleasant life.
Posted by Charles Shere at 2:26 PM