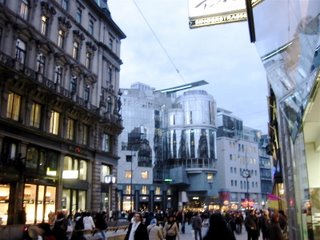 ACROSS THE STREET from our kitchen window is another five-storey building, an older one than ours, brick I suppose but stucco’d to resemble stone as are all the prewar buildings in European cities; with balconies, gables, reliefs, architraves, cornices, spires, garlands, coining and the like to an effect almost excessively baroque — like much of Vienna.

The building, like ours, is on the corner of a block, so it’s roughly triangular, except that the point at the corner is cut blunt, presenting to the intersection a three-window-wide side. At the center of this side, above a balcony whose rail is covered with pots of geraniums which provide the only color to this otherwise beige-bland building, is a sort of cove within an arch under a gable, and in that cove is a statue of a woman wearing a Greek sort of robe. I don’t know who she is. Her left hand rests gracefully on her left shoulder; her right hand gracefully descends to point toward the street.

From her index finger hangs — not a scale, indicating the goddess Justice, but a perch; and on that perch sits a very large crow or, more likely, a raven. This bird has been perched there since we arrived, thirty-six hours ago. It moves about from time to time, adjusting itself on the perch, but we have never seen it leave. I think perhaps its wings are clipped, or perhaps broken. It seems well fed, but not particularly active. I think of it as essentially Viennese.

Don’t get me wrong. Vienna’s streets are full of engaging people who seem intent on their affairs — whether business or pleasure, they seem purposeful. Tourists aside — and there are plenty of us, of course — these Viennese are far from apathetic. It’s just that you can’t know what they’re about.

We’ve only scratched the surface, of course, because much of yesterday was by way of business — a meeting with a colleague at lunch; an evening at the premiere of a friend’s opera and the post-concert reception. In between we fit in some walks, for that’s the simplest way to get about here; and of course a dinner or two, and a café or two.

Our apartment is a ten-minute walk from the center, which I take to be Stephensdom, the cathedral. Vienna has lots of churches; there’s one right across the street, Maria am Gestade (I take that to mean Town Mary, but that’s a dubious translation); and religion is in the vernacular; people still say Grüss Gott when meeting, instead of Hello or whatever. But I don’t think religion is what these Viennese have in mind as they stroll the streets.

Like every European city Vienna has devoted a number of downtown streets to pedestrians. Deliveries are made along these streets in the early mornings, I suppose; and many of them have parallel streets a short block away, facilitating deliveries and the like; but during the day and early evening they are very much walking malls.

Strolling malls, actually. The shops are mostly high-end retail outlets: their rents must be astronomical. But there are also a few small shops — tobacco shops (the Viennese smoke more than the Budapesters, even); bookshops; now and then a café (I had a nice Gerstnertorte at Gerstner). T-Mobile has a big shop, where I got a chip for the telephone. No one bothers with phone booths any more.

Just outside the center, on the other side of the Ring, I found a little shop with chips and batteries and accessories for all kinds of telephone, but the chip for mine would have cost €20, and given me €5 worth of telephone calls. At the T-Mobile store exactly the same cost €15, with €9 worth of calls. Thus does the high-rent corporate-owned outlet undercut the storefront operation run by some poor immigrant who’s just trying to eke out a living, and there’s the lesson for us all. Of course I opted for the savings, not the ethics, and there’s another.

The opera was by way of commenting on this and other things. John Adams and Peter Sellars co-wrote the libretto, based on a fairy tale of a girl who turns into a flowering tree by night; John composed the music and conducted the premiere. A Flowering Tree is a joint commission; it goes soon to Berlin, London, New York, and San Francisco. It was performed here in a festival Sellars has been commissioned to present within the overall citywide celebration of Mozart’s birth, 250 years ago; but Sellars refused to present Mozart — who was already well enough represented elsewhere! — and instead chose to present the revolutionary and visionary spirit that animated Mozart, especially in his last years, when he belonged to an idealistic society called New Crowned Hope.

And so the opera was performed by three young American singers, a pair of Indonesian dancers; and a chorus and orchestra from Venezuela — the musicians a Youth orchestra, at that. The stage was dominated by a stylized tree upstage center; stage left there were three wide lilypad-like platforms on which the stylized action took place; stage right another platform high and back, with the orchestral winds seated in front, and the strings in the pit.

The opera is in two acts, each about an hour long; the music is continuous, with very few silences; and in Adams’s familiar style, with chuffing repeated figures providing energy and motion, and long phrases riding over them providing emotional charge and color. The story: a girl turns into a tree whose blossoms are sold at the village market to provide for her aging mother. They attract a Prince who falls in love with her, but demands she continue to turn into a tree during their nights of love. A jealous sister of the prince tricks her into repeating the trick, but stops the process by which she returns to human form, leaving her a limbless torso.

The Prince wanders disconsolate; the torso is carried by beggars from city to city, where she sings her sad songs for what pennies she can. Ultimately the lovers are reunited, and her sacrifice and love returns her (and, presumably, her Prince) to their rightful form. We don’t find out what happens to the evil sister.

All this is presented at one remove, sung by a tenor Narrator, and directly, by a soprano and baritone. The action is also danced throughout, and the story is commented on by the chorus (they sing in Spanish, the soloists in English, the whole supertitled in both English and German).

I found the opera long but beautiful, and the effect tranquilizing in the end (I mean that in a good sense), a sort of corrective and logical sequel to Doctor Atomic, the previous Adams-Sellars collaboration, given last season by San Francisco Opera. I’m very glad to have seen it, and to be able to report on it here. But I look forward to Mozart later in the week, by way of Figaro’s Wedding.
Posted by Charles Shere at 1:50 AM