21: The companionship of strangers 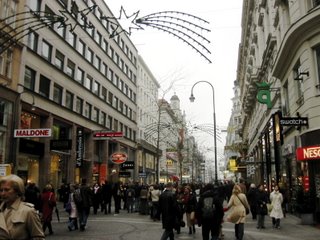 BELLS ANNOUNCE THE TIME throughout the day here; I’m not sure about the night. I sleep pretty soundly, after a day packed with sensory input and several kilometers’ walking. This morning I heard them strike seven, but not seven-fifteen; I got up when they struck the half-hour. I don’t know where these particular bells are: perhaps on the Hoch Markt.

There a dozen historical figures parade across an elaborate mechanical clock, a new figure at the beginning of each hour. Every minute the figure takes a very slight lurch forward; in an hour he’s nearly off-stage again, and his successor is beginning another hour’s passage. Marcus Aurelius, I think — or possibly some other Roman emperor — is the first of these; the last is Joseph Haydn. Most of the others are important rulers, among them Maria Theresia; but I’m happy to see that Walther von der Vogelweide is there too, Haydn’s not the only musician in town.

Until fairly recently the average Viennese did not carry a watch, let alone a cell phone. The watch was born of the Industrial Revolution but wasn’t cheap enough for the average guy until fairly late in the Nineteenth Century. Until then these bells had a very real utility, marking each quarter-hour. Keeping track of time was a public utility, whether managed by the city or the Church.

This remains true, in a sense; both my laptop and my telephone set themselves by consulting with a public agency every now and then, figuring out where they are and adjusting their time-displays accordingly. I haven’t actually set a watch for a long time, except when flying across time zones, when I want to anticipate the arrival zone before leaving the present one.

But it’s easy to overlook our contemporary dependence on Public Time, so intimately connected are we with the time we carry in our pocket or strapped around our wrist. Our individual, private business, our comings and goings, seem entirely personal, reminding us of appointments we’ve made for our own personal reasons, whether business or pleasure. The passage of time is personal, almost never shared.

Yesterday, though, I participated in a rare example of public sharing of the passage of time. A group of us were gathered in the Hoher Markt watching that clock, wondering what would happen at the top of the hour. We waited several minutes, for either the clock is two minutes late or the rest of us were two minutes early. We stood there, some of us open-mouthed, gaping like village idiots, which I increasingly think tourists are — hicks from elsewhere marveling at unfamiliarity.

At the top of the hour, of course, not all that much happened. Maria Theresia took another little jump forward, almost offstage left; Joseph Haydn took exactly the same jump forward, just onstage right. The bell rang the requisite number of times. We separated and went our separate ways, the public moment dissolving back into a scattered collection of personal ones.

These figures ticking across the clock are fascinating but a little sad. They’re in constant motion but never get anywhere; they’re condemned by their machinery to repeat the process endlessly. Their only hope for rest is in the ultimate breakdown of the entire machine, a calamity we all hope does not occur in our lifetime.

The other day at the new museum of contemporary art, the building in yesterday’s photo, the one with the upside-down cottage crashing into its roof, we looked at a fine show of “New Realists,” those European sculptors and painters who manipulated reality in arresting modernist work in the 1960s and ’70s.There were two wonderful Jean Tinguely pieces, one of them quite enormous, with belts and flywheels and pulleys and bell cranks and eccentrics and springs attached to accordions and pianos and glockenspiels and drums and pots and pans, all making a subdued racket whose chaotic futility was charming to see and hear.

It reminded me, as did the Hoher Markt clock for some reason, of Epicurus’s explanation of the nature of matter: tiny tiny particles acting on impulses known only to them, swerving toward or away from one another through attractions (or revulsions, perhaps) of some kind of charm. Clinamen, was the Greek word for it. Inclination.


CLOCKWORK IS A MECHANICAL means of regulating these inclinations; public time provides a co-ordination of private business. We visited the City Historical Museum yesterday and took in, along with much else, an extensive exhibit on Railway. Here’s something barely two hundred years old; my grandfather’s grandfather must have ridden on the first railway to appear in his neck of the woods. But we have yet to come to public terms with it, and its relevance to contemporary society, not to mention life only a decade or two into the future, is questionable.

Some of the reasons for this of course have to do with energy sources, land values, competing transport methods, commercial demands and the like. But there’s another problem, and that is the changing address of the Public toward Regulation. Railways are intrinsically complex, far-flung, and costly. They demand huge outlays of capital, in terms of money, labor, land, and forethought; but they repay these outlays only over long periods of time.

They seem to me to be uniquely Public, like all other things pertaining to Transportation — which is, after all, the motion of personally or privately held material (or persons!) through public space. Society, which is chiefly urban, has evolved streets, ditches, high roads, canals, and byways to facilitate transportation; and public space, as noted here yesterday, to punctuate this constant shuffling about with points of rest or assembly. More recently, to accommodate technological advances, society has provided trams and tramlines, buses and bus shelters, railways and railway stations, air control and airports.

Much of this is taken for granted, especially here in Europe, where public transportation is thought of almost as one of the Rights of Man. The great railway stations are our version of the medieval cathedral, huge public buildings, reasonably central to the cities, but temples to Commerce rather than God, with caf&egraves, newsstands, bars, tobacco shops, and banks; and the great European stations were designed to be imposing, to impress their users with massive scale and, often, extravagant decoration. (To an extent the great shopping streets of European cities have also assumed this function.) One subtext was the desire of the State to remind its citizenry of both its power and its service.

Rail travel is still quite popular in Europe, but it’s in trouble. Longer hauls are facing stiff competition from airlines. Twenty years or so ago the railways fought back by increasing their speed; high-speed lines were built across France, then into Spain and Italy. Even so, you can’t get from one European capital to the next by rail as fast as you can by air. And the rise of cut-rate airlines has changed things: we flew from Amsterdam to Bergamo for €29; from Venice to Budapest for less. There’s no way rail can compete with that, even forgetting about the time advantage.

But one factor is left out of this competition: the intrinsic difference between rail travel, which one thinks of as publicly facilitated, and air travel, which has become purely a business concern — and increasingly a losing business, like rail. I somehow find it easier to forget about the governmental aspect of air travel: traffic control, subsidized airports, subsidized airlines, subsidized airplane factories — it’s all behind the scenes, behind the corporate logos and the frequent-flyer cards and the flight attendants. The role of government in rail travel seems more apparent, partly because with very few exceptions it’s a national monopoly — in the United States as well as in European countries.

And along with that difference there’s another: travel by air seems like a few hours of forced exposure to the company of strangers, an interruption of a journey which is otherwise essentially personal. Rail travel seems like an embrace of the company of strangers, a willing entry into a traveling public space. At least to me. I think this difference has two or three chief reasons: the relative speed, more human in the case of rail (at least until the TGV started streaking across France); the greater ease of moving about the carriages (and the close but comfortable companionship with strangers in the six-person second-class compartments); and the view of human activity out the windows.

THIS COMPANIONSHIP WITH STRANGERS, enhanced by the presence of public spaces and public transportation, reinforces the idea that we share our lives with many other people; that there may even be some degree of shared responsibility for life and prosperity. I’m thinking along these lines partly because I’m reading — in an extraordinarily desultory way — Jean-Jacques Rousseau’s The Social Contract, chiefly because a copy happens to be at hand here in the apartment we’ve rented. But these considerations are forced on you when you spend hours looking at human history, shared human history, from the poignant bones found in a Neolithic grave to the technologically dreamy projects for a new Central Railway Station to be begun, some hope, within the next ten years.

It seems to me that the drift of human occupation of this planet — I can hardly call it “evolution” — will necessitate, in the long run, a greater sense of community, rather than greater trends to individual privacy, tribal independence, or national separateness. Much of the horror of the century recently finished resulted from a pride, even arrogance, of Nation. Rousseau suggests that social structure evolved from the most instinctual form of human organization, the paternally ruled family. If true, it’s time to abandon that model: our numbers and our technologies require administration, not rule.
Posted by Charles Shere at 10:44 PM