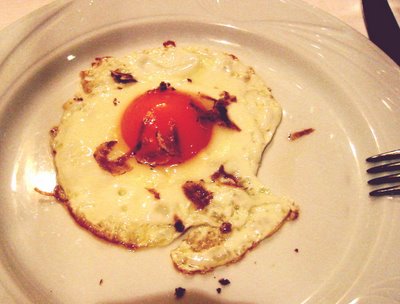 Rob was driving too fast, the sharp right was unforeseen (though clearly marked, with a 20km limit), and the car spun 180 degrees and slid backward down a sandy driveway. He avoided scraping against the house wall, and no one was hurt, but the car would not run.

While he and Eric looked critically at the broken rear axle, and someone else dealt with the owner of the house who was pointing out the carefully laid and tamped sand, its brick paving only begun that day; we’d rutted it deeply.

ONLY A DREAM, of course, and Bill doesn’t drive like that; he’s an excellent driver, and a good thing to, for we’ve been crisscrossing Monferrato, by day to enjoy the visual beauties, by night to forage, nocturnal primates in search of fodder.

We are here at a favorite place, I Mandorli, an agriturismo or farm B&B in Monferrato. We found it six years ago and have been back every two years, in the course of which Gabriella and Franco Rampi have enlarged the B&B which now has at least five rooms; and Franco has systematically diversified his production.

We’re in a fine big room with a fine big bed, our own bathroom with shower (but no tub, and we do love our tub), and a magnificent view. Of course technically that’s not quite true; I wrote the previous sentences several days ago; we’re now in a perfectly acceptable room with a view of a building across the driveway; we’re not in Cardona di Alfiano Natto, we’re in a country we’ve never seen before; it’s not Nov. 1; it’s five days later. But I’m getting ahead of myself.

Let’s go back to Monferrato. What you see above is simply a fried egg wiith some bits of white truffle on it, and it — and a number of other fine things we’ve eaten — is one of the three or four reasons I’ve got behind myself. (The others are: Conversation. Absence of internet hookup. Lovely country. And the cumulative effects of eating.)

We left Torino on Monday, after pretty much sloughing off this year’s Salone de Gusto. Well, we’ve been there, done that, three times before; and to tell the truth it’s getting repetitive. I’m not complaining: the food show, in the enormous Lingotto exhibit hall, is a joy to walk, though not on Saturday; and the “laboratories of taste” remain absorbing and worthwhile, but we’ve done most of them in the last three outings.

I’m sure Terra Madre, the biennial gathering of farmers, producers, fishermen, butchers, and (this time out) cooks and marketers was fascinating and productive — but I didn’t have a pass to get in, so I can’t really speak to that this time round. (I was deeply impressed last time.)

So we left Torino on Monday filled with City and longing for Country, riding with our friends Bill and Judy out through the countryside to I Mandorli, the agriturismo we like so much that we’ve come here every other year for six years now — the last three times with friends to share it with.

I’ll list the menus we ate at the end of this edition of the blog. The list will be provisional: I’ll have to flesh it out later, with addresses and such — we didn’t eat anywhere I wouldn’t willingly go back to.

But eating, you’ll be shocked to read here, is not everything. I wanted to re-visit some places we’d already seen on this trip, partly to show them to our friends, partly to see how they’re coming along, partly (I suspect) to reassure myself that there is some degree of Continuity in this life. So Monday, en route to I Mandorli, we stopped in Moncalvo to see its astonishing baroque brick church, and have a snack at the café, and admire its oval piazza.

And then we drove on to our B&B where we settled in before being surprised by our friends Franco and Gabriella with an invitation to dinner: she’d been simmering a bollito misto all afternoon, on the outdoors stove, and we had to accept, and to tell the truth didn’t mind doing so, for she’s a fine cook, their table is generous and friendly, and Franco’s wines are worth drinking.

Tuesday morning after Gabriella’s fine breakfast (orange juice, fruit macedonia, applecake, biscuits, bread and jam, cereal if we want it, yoghurt ditto, and plenty of coffee and hot milk) we set out in no particular direction, soon ending up in Odalengo Piccolo where, it already being noon or so, we put in at a country inn called Serra — no menu; nice pretty girl, only men at the tables eating. Then we drove on to Casale Monferrato, a town we’d visited a few years back but only briefly. This time we were on an errand: to buy some laundry soap.

Casale seems to be a worthwhile town, fairly prosperous, with fine shops (I bought a nice Basque beret, having come away without one) and the typical Piemontese portici, arcades under overhanging apartment buildings, with polished wood and immaculate glass storefronts thereby shaded from the sun.

But our real destination was nearby, in Rosignano: the Istituto Agrario Luparia, a boarding school for honor students from tutt’Italia who come here to study not only agriculture but also the preparation of agricultural products and, along the way, the value of traditional methods (as well as that of scientific and up-to-date ones, of course).

Here Franco Rampi, our host at I Mandorli, was seeing his third olive harvest crushed. It’s still a tiny production, but up this time from a few liters to fifteen or so. The olives go into the hopper of a self-contained machine about the size of a couple of refrigerators lying on their sides; complicated hoses deal with compressed air and water; the olives are eventually ground up (pits and all) and spun at high speed, and in the end a thin stream of beautiful emerald-green oil pours slowly out a tap on one side of the machine, while an unappetizing-looking paste, pinkish maroon in color and the consistency of things you’d rather not consider, is extruded out the other.

(This refuse is taken by commercial presses to another step to produce a more industrial grade of olive oil, which no doubt has its usefulness. Here it is simply taken out into the vineyard and spread on the ground. But I sneaked a taste, poking my finger in and trying it out, and it wasn’t bad.)

We congratulated Franco and went back to our rooms for a rest; then on to the evening’s restaurant, Tuais — so called, I’ve been told, because it’s not the first restaurant its owner has opened.

Our food was delicious, a celebration of the white truffle now in season, gravely weighed out and set on a little plate on the table to smell while dinner goes on — we chose four rather small ones, which seemed to be at their peak. The dinner proceeded beautifully. After our pasta we didn’t really want any meat; the truffle had been substantial enough; and when the chef suggested a simple fried egg it seemed exactly the right note to end on.

Unfortunately, though, after dessert he was back to deliver a lecture — I would almost call it a rant. He railed at the government, the taxes, the cell phones, the tourists, the regulations, the economy. Italy has no future, he assured us; he was in despair for the future of his own children. Twice I assured him that while this was all true, and universal to boot, we were tired and wanted to go home. This only seemed to annoy him further.

There were aspects of the Salone, back in Torino; and of conversation at Franco’s table, that reverberated with Fabio’s rant. I don’t see much of a future either; global problems seem overwhelming; governments are unjust; international corporations are ruining everything. But the dinner had been so good, and daily life here is so pleasant (though admittedly we are pensionati and don’t have to think about making a living) that the outrage seemed misplaced as well as futile. Finally we disengaged ourselves and drove off on wrong crooked roads through the night.

WEDNESDAY WE DROVE OUT to another fondly recalled site, the Abbey at San Vezzolano, last visited four years ago. Its restoration has proceeded in the meantime; the two or three frescos are cleaned and heightened; stones are cleaned, the cloister both better organized and somehow more natural — I mean, seeming to be more like what it must have been when in daily use as first intended.

This is a small Romanesque complex, one of a series of abbeys whose purpose was to provide hospitality, at about a day’s journey apart (much like the California missions), for people making their pilgrimage from Paris or thereabouts to Rome.

In what had been the winter barracks, now an exhibition hall, there was an installation with photos nicely portraying the many other such buildings throughout Monferrato — chapels and churches, one of which we’d visited en route to Casale the previous day. And there was an absorbing display of research into the astronomical basis of the orientation and plan of the Abbey, which is laid out on lines saluting the equinox and solstice, the rise and set of the moon. All this bears further investigation and consideration.

From there to a museum Gabriella had recommended in a small town across the street from a dusty railroad station — in an impressive old stone and brick building that had been an important factory and warehouse for Martini & Rossi, in fact; and which celebrated through its collection a sort of history of wine.

But what a collection! There are ancient Hellenic, Etruscan, and Roman drinking vessels; Attic red-and-black ware; marvelous old glass; huge wooden presses and crushers and wagons and hoists; a number of lovely stills; a collection of bottles and flasks... all with just the right amount of wall-label explanation, nicely lit, well laid out in a succession of rooms, subtly and effectively lit.

Then another rest, and dinner at the Osteria del Castello, da Dirce when we first met the operation six years ago, now moved to magnificent quarters in the town hall of a hill town just north of Asti.

Finally, Thursday, another day of driving about — I may have some of this a little mixed up by now — and a visit, with Franco and Gabriella, to a painter-sculptor-printmaker who lives in a chateau in Villadeaiti, who showed us a unique and priceless collection of ancient printing presses, all of them restored and working, as well as his own hyperrealist paintings; and then dinner at da Maria in Zanco, the next town to the Rampi’s Cardona; and here we had a wonderful expression of casalinga cooking prepared by a woman who’d been at the stove here for forty years, and knew what she was up to.

And now I’ll close with the week’s

You can see photos of some of this week at dotmac
Posted by Charles Shere at 12:47 PM