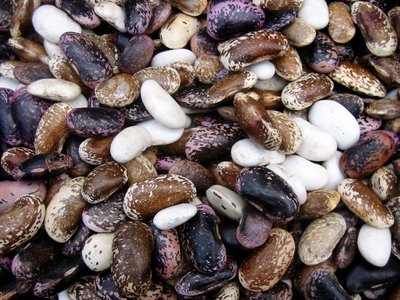 HUNDREDS OF PHOTOS have littered iPhoto in the last four weeks as we’ve travelled from Friesland to Piemonte to Budapest to Vienna, but one of my very favorites is this one, shot yesterday in the Nachmarkt.

The main reason is simply the visual interest, of course — the shapes, colors, light-and-shade, and implied texture of these beans, “käfir beans” they’re called, as they lie all jumbled in their bin. In the market, the biggest I think I’ve seen apart from Torino’s, only one stall had them; in that stall, theirs was by far the smallest bin.

I wrote about them a couple of days ago, after we’d cooked and eaten them. They were truly delicious, nutty and velvety, with a taste lying somewhere between bean and chestnut, and a smooth creamy texture that soaked up olive oil and sage and pepper and salt (the salt from the salami, you’ll recall) while retaining almost a meaty, substantial quality.

But looking at the photo this morning the writer-critic in me sees these beans metaphorically, and that contributes to its fascination. This will be complex, but let’s see if I can juggle three overlapping considerations on my mind this morning.

One consideration is social and political: the fact that millions of people, of colors as different as these beans and each as individual as any one of them, are crowding together on this planet, each person with his own innate right to life and prosperity.

Another consideration is esthetic: we’re attending a Festival bringing together sculpture and painting, dance and music, writing and installation from widely dispersed regions of the earth, all responding in individual ways to the social and political moment.

The third consideration is the miracle of Mozart, who was born 250 years ago, and whose long residence in this city (though far from long enough!) resulted in a body of work uniquely expressing the reciprocal influences of social and political context with individual artistic gifts and ambitions.


VIENNA HERSELF, OF COURSE, is a fourth consideration, intruding on my thoughts with monuments, malls, trams, tourists, museums, cafés; and there are distractions and entertainments enough to fill a month: the premiere of John Adams’s new opera A Flowering Tree, a rich art opening last night, the Kronos Quartet tonight playing Terry Riley and György Ligeti, The Marriage of Figaro Saturday night, a presentation by Toni Morrison on the plight of the globalizing world Sunday, Così fan tutte Tuesday night — you get the idea.

The other day we visited most of the Hapsburg family. You remember them: they provided money, “leadership,” and breeding-stock for many of the monarchies of the baroque Age of Imperialism. I was looking for one or two in particular: Rudolf, whose neurotic love-murder-suicide was the subject of Mayerling, a ballet we saw a week ago in Budapest; and Ferdinand, whose assassination in August 1914 plunged the Western World into The War to End All Wars.

Rudolf was not to be found; perhaps the nature of his demise left him too controversial for the family vault. But plenty of other members of the family were here, in huge ornate lead caskets. Admittedly a few of these were fairly modest, resembling overturned cast-iron bathtubs roofed over with a slab of metal. (They suggested army tanks to Lindsey, who is still struck by the sight of a brooding Soviet tank in the Terror Museum in Budapest.)

Most of these tombs, though, are really quite huge and covered with sculpture, relief, and frieze; and all of them are made of lead, a metal I’ve always thought beautiful — my father worked in metal, and we sometimes had a sheet of lead to play with — but is certainly somber and unforgiving, especially when present in room after room of gloomy dim monument to death.

Mozart, of course, is famously buried in an unmarked grave. “Even now experts are unsure which body is his,” says one of the Mozart notices I’ve read in the last few days, as if the passing of two hundred fifteen years might have singled him out among the thousands around him, even with today’s technology.

So much about Mozart seems inevitable and therefor for some reason appropriate. His gifts and genius were for life; his physical remains, after the departure of that life, can have no importance to any of us. In the Mozart House near Stephansdom yesterday we wandered among the rooms he inhabited for the few short years in which he was something of a success, when he composed the last of the quartets he dedicated to Haydn, and Le Nozze di Figaro, and many of the great piano concerti, and so much more. On the walls, among portraits of friends and enemies, letters to and from his father, notices from contemporary newspapers and handbills, and lists of furnishings and household effects, were some pages of his manuscript: it is these pages, now, that contain the life and genius of Mozart.

After over two centuries we rightly see him as standing well out from even the gifted and varied artistic and social context of Vienna at the close of the Age of Reason, one of the three capitals of Europe, one wall-label said — the others being London and Paris, of course. Vienna was the capital of the Austro-Hungarian Empire, the center of Central Europe, the commercial and intellectual nexus of the known world, with input from Africa and Asia and the New World, secure in its awareness and understanding of history, thriving with new technology at the dawn of the Industrial Revolution.

It was all beginning to crumble, though. The Turks were constantly at the door to the south. Masses of exploited citizens were ready to rebel. A structure had grown intricate with administration, overloaded with decoration, and out of balance between what it used contrasted with what it provided. The point of sustainability had been passed, and history provides few examples of such runaway systems being successfuly analyzed and corrected and returned to working order.

Toward the end of his life Mozart was admitted into a new branch of Vienna’s Masonic lodge, a branch composed of thoughtful and aware men (no women, of course, in those days!) who were quite well up on these social and historical events. Mozart and his father were both quite savvy politically, and though guarded in public no doubt outspoken in safe society. (Their letters to one another frequently resort to a private code, for letters in those days were read and copied by the government — unthinkable today.)

Peter Sellars, the director of the festival some of whose events we’re attending, decided to use that fact, and the climate in which Mozart wrote his last great works, as a point of departure for his own contribution to this Mozart celebration. I think he is not trying to present the work Mozart would be doing were he alive today; Sellars is too intelligent for that; he’s trying to see how Mozart’s mind and expression would deal with today’s crises and opportunities.

The last three great works, according to much of the apparatus I’ve read these last two or three days, are the operas La Clemenza di Tito and Die Zaüberflöte and the unfinished Requiem. They are “about” ineffable generosity and forgiveness; transcendent justice and rightfulness and the qualities of rulers, nobles, and the common man; and Death.

I think, and I think Sellars thinks, Mozart spent his last few months trying to Get It Right. Not only understanding what it’s all about — life, love, marriage, paternity, business, art, society, politics, and all that — but, once understood, coming to terms with it all, dying knowing that he’d done what he could by that, made his contribution, lived up to his promise.

It’s ironic, of course, that he left the Requiem unfinished. Perhaps it was, for some personal reason, unfinishable. It is an artistic problem, of course, though the current new edition seems persuasive to me. Perhaps it’s best to think of it as complete, as forming not a finished statement but an invitation, Mozart’s way of introducing his listener — and his performer! — to Death.

Three quotes among the many in facsimile of Mozart’s hand, writ large on the walls in the Mozart House, stand out in my memory, like white beans in the photograph. When I looked at them yesterday they were so striking I didn’t bother to write them down: and the result is, of course, than I can only paraphrase them here.

One was a line he wrote out in English, as part of an exercise when he was studying that language: Calm and tranquility do more than any medicine to overcome the physical disorders that confront us in this life.

Another was the famous passage in a letter to his father, describing Mozart’s own attitude to Death: Since it is the true and inevitable end of our life on this earth we must think of it as natural, our last true friend accompanying us. I wish I had the text at hand; you can look it up I’m sure on the Internet. It expresses an Epicurean view of life and death with unique eloquence.

The third was a note he wrote on a page of musical exercises he’d given to an English-speaking student: I will not be at home tomorrow at the usual time so please come at three and a half.


WHERE DO THESE BEANS come from, I asked the young woman in the market — I’d already established that she herself came from Uzbekistan, of all places. From here, she said, from Austria. The market itself, of course, draws from every continent, as Vienna has always done, since it was a stop on the Neolithic amber-trading route. Globalism is always with us and perhaps we should get used to it as our Last True Friend; stop fretting about its discontents and try harder to administer it in a sustainable way that provides justice to all.

But things are close to a major tipping point, it seems to me, and Mozart’s best lesson may have been his example: play by the rules, do the best you can, make your feelings and observations known to your own time and to posterity, work constantly, never give up aspiration.
Posted by Charles Shere at 11:59 PM