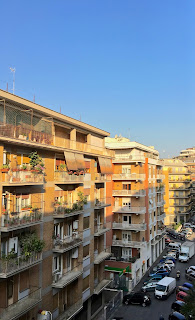 Via Damaso Cerquetti, April 4, 2017—
UNLESS DISTRACTED by something — a misguided sense of purpose, for example — stepping into an elevator usually brings poor Paolo and Francesca to mind. Not my son and granddaughter, but those unfortunate lovers consigned by Dante to an eternity of drifting up and down, up and down through the hot winds of Hell. As I recall the poet's idea was it was too difficult to decide which particular one of the seven floors of that unfortunate beyond to choose for their assignment. I'm not sure: I never have made my way through the infernal masterpiece. It seems an ingenious solution to a creative block and that is something I know something about.

After a long journey (by present-day standards) in far from the best of health we arrived at Rome's main airport on time from Oslo, flying three hours on what seemed to me a shabby 737 operated in the new bare-bones style by a cut-rate contractor to Norwegian Airlines, who had flown us competently from Oakland to Oslo. That first, longer leg — nine hours — had been delayed, however, by nearly three hours, partly because Passport Control had delayed the departure of passengers from the plane's previous flight Oslo-Oakland, apparently for lack of personnel to inspect their passports.

So while we managed to catch the Rome flight, having been whisked efficiently through passport control in Oslo, our bags were not so lucky, and we waited for them for an hour in vain, finally joining the group who, like us, had flown from Oakland via Oslo, and were filling out the forms for delivery of delayed baggage.

Hamza and Francesca waited patiently with a sainted Margherita pizza cooling in its cardboard box, then drove us to our home for the next three weeks. Four of us got into the elevator and it lurched happily upward, stopping six inches short of our sixth floor. The inner doors opened fine, but not the main doors on the sixth-floor landing. I pushed the button to go back down: nothing. I pushed every button but the alarm: nothing. Just as I was considering pushing that last button a face peered in through the windows providently set into both sets of doors.

Francesca's Italian is fluent and I was half dead from exhaustion and incredibly sore bones and muscles. She and the face, who might have been Dante, conducted a muffled conversation I followed with little comprehension or interest. It involved an iron thing outside our door and therefore accessible to us but not to him, some iron dinggetje, I know the Dutch word but not (yet) the Italian, fixed to the outside of the elevator car for just such emergencies. After some time we realized that not only did we have to nudge it, we had to push on the building's door at the same time. We climbed up out of the elevator car with our carry-ons and our pizza and welcomed release into a paradise of an apartment whose owners, grave with concern for us, explained everything about the place to Hamza and Francesca and my own poor beautiful and long-suffering Beatrice, while I sat stupidly, an old man suffering from ambition.

I AM HERE in Rome to contemplate my feelings about religion, and to see friends and relations, and to eat and drink and walk and think. Perhaps my own religion — and let's get this straight: in my opinion religion, whatever it is, must offer the choice of an individual address — my own religion perhaps centers on friends and relations, eating and drinking and walking and thinking. It's appropriate to come to Rome with this frame of mind. I was sorry to fly in, it's the worst way to travel, but time and the pocketbook decreed it. Had I walked into Rome I might have met someone to show me the way, but I don't have Peter's luck, or Dante's. No ghost of Christ, no evocation of Virgil. Hamza and Francesca will do for many things but I won't ask them to provide answers to meaning-of-life questions.

Yesterday was our first full day here and we did nothing but rest, explore the immediate area of our apartment in the Monteverde quarter, shop for dinner, and cook (see Eating Every Day). Well: We ate, drank, walked (not a lot), thought. And talked. Lovely technology: we could even have a long group video conversation with dear Grace in Portland on her birthday, which provided more relations to contemplate. I begin to think that the meaning of life is living it in the fullest, but I'll have more to say a little later.

A new day, clear and comfortable. Someone's at work outside with what sounds like a grinder, alternating at times with a power hammer of some kind. In Italian towns and cities you're always hearing the sounds of masonry at work. The earth is dug up elsewhere, ground into cement, made into bricks or blocks, sent to the cities, cemented together to make towering buildings. Rome was built on relatively boggy ground, unlike Paris whose underground is an extended basement from which limestone was quarried to build the six-storey overstructure. (I think I have that right.) But Rome has its catacombs and its towers, not very many tall ones of course, the curse of Babylon is still respected if only for esthetic reasons, and the architecture of Dante's poem, if not its substance, will be in my thoughts for a few days. I'll try not to let it obsess me. There's carbonara and gelato to attend to.

It's never a good idea to judge anything...a place or a life...after a long, arduous journey. Clarity and acceptance arrive with 'A new day.'

Your ambition gives me inspiration.