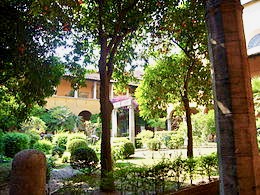 Via Damaso Cerquetti, Rome, April 19—
OSTENSIBLY THE PURPOSE of this trip is to introduce fourteen-year-old to Rome, its history and its wonders, but in fact he has primarily been exposed to the important skill of flåner, that elegant French word we use when we don’t want to admit to loafing. We seem to have intentions: getting a special loaf of bread, finding more English peas at the greengrocer. But we wind up strolling through the Non-Catholic Cemetery, or paying hommage once again to Fatamorgana.

The other day in front of the Spanish Steps — I wonder if fourteen-year-old has any visual memory of the place, overcrowded as usual with tourists — we were approached by a well-dressed man, in his sixties I would say, who wondered if he could be any help to us. Oh no, I said, I’m just looking for an interesting walking route to the Governo Vecchio. (We were planning to stop at the excellent Caffè Novecento.)

Oh, simple enough, he said in very good English with only a slight accent, but you can’t go straight there, you follow this street to the end, then turn to the left and look for it.

He was relatively tall for a Roman his age and quite slender.. I thought he was from the north. But you’re not a Roman, are you, I asked, pretending his knowledge of the streets suggested he was. No, he said, I’m from the Veneto; I work in glass, plates and that sort of thing. You’re from the States? My product is in Magnin, Nordstrom…

We confirmed that we were Californians, and, on his asking, that we were staying in Monteverde, near the Piazzale Dunant. Oh then you must try a restaurant there, he said, very local, the tourists don’t know about it, a very Roman place called C’Era Una Volta. We thanked him and went on our way, straight down the long street toward the Tiber, then left and eventually to the Caffè.

After we’d left him, though, and gone on a few meters, I turned to see what he might be doing. Standing on the corner, smiling gently, waiting for another conversation I suppose. Human street furniture. In Sicily a few years ago we found there are still those modest functionaries ready to carry a bag, or advise directions, or (most importantly) watch your parked car, for a coin or two. Of course we hadn’t offered our Spanish Steps guide anything, nor, I think, did he expect us to; he was simply a retired salesman enjoying the sun and looking for the kind of human contact that his career had offered him.

Yesterday on the Ponte Sisto we walked past a four-man band: standup bass, drummer, clarinet, vocalist. They were playing 1930s jazz, and they were pretty good. They were from Sabbioneta, the bass player said with a smile, as he plucked away, tonic and dominant. I dropped a euro in the cap lying on the pavement; there weren’t many others in it. At the other end of the bridge a more traditional musician, an old man with his accordion playing some Italian folksong, probably a commercial one from the 19th century, not Neapolitan I’m pretty sure. Another euro.

I’m struck by the general lack of panhandling and homelessness in the quarters we inhabit. Maybe it’s not yet warm enough; maybe the government has cracked down; I don’t know. There is a degree of incivility — youngsters will not give up seats on the trams and buses, for example; only a rare visitor will do that. The other day it was a couple of fortyish Bangadeshi men on the crowded train up to Pisa: we’d stood an hour on the train, glaring at youngsters sprawling in the seats, playing cards, listening to their music, applying make-up, studiously avoicing looking up at us. The Bangladesh were down at the other end of the car and had apparently been trying to catch our eye; finally we noticed; they smiled and stood and beckoned to us to come sit down.

Other Bangladeshi sell things: garlic, in the street markets, for example. I think the vendors at more or less permanent stalls on the sidewalk, selling cheap underwear, electrical accessories, shoes and socks, umbrellas and the like — I think they are more or less permanent residents. No doubt other more peripatetic street vendors — of sunglasses when it’s sunny, umbrellas when it rains (and how are they so quickly supplied the correct item?) — are refugees trying to make a few bucks to feed themselves and perhaps family back home. (I get this insight from a remarkable novel I read last month, Ilja Leonard Pfeijffer’s La Superba, about African emigrants to Genoa.)

There’s an African refugee who stands at the gate to the supermarket across the street, politely waiting. Sometimes I drop a fifty-cent piece into his cap; mostly I don’t. He unfailingly smiles at me. I’ve noticed other people, presumably locals, follow exactly the same procedure. The other day we were at the famouos bakery Bonci to buy an Easter cake: it was crowded, and I waited outside. I struck up a conversation with a refugee who was from Senegal. He’d arrived in Lampedusa five years ago, he said, and had a wife and two kids. It was very difficult, he said.

When I finally got inside I bought a jar of white beans for him, but when we left the shop he was nowhere to be seen. I don’t know if I’d queered his operation by opening a conversation with him, whether he’d taken a break for lunch, whether he’d been driven away — I’ll never know.

Yesterday we stepped into the cloister at San Giovanni Battista dei Genovesi, on via Anicia in Trastevere. I wasn’t sure about it; there’s only an ordinary wooden door in the wall next to a brass plate of push-buttons like you see on every apartment building. You must ring for the porter, a DHL delivery man said — he happened to be there at the same time. The porter appeared, a very small man, rather serious, not particularly well dressed but not shabby.

May we see the cloister, I asked, and he silently waved us through the small doorway into one of the most tranquil spots we’ve found, a complete surprise. A small, square cloister surrounded by two-storey walls, with graceful, slender double columns; the garden rather lush and green, with palms — they say the first palm planted in Rome was planted here — and flowering trees, and a wellhead at the center which we were unfortunately not allowed to visit, as the garden was chained off, and could be admired only from the colonnades.

Nor were we allowed to photograph. The moment my companion lifted her iPhone the little man appeared: No foto. I don’t know where he’d been lurking. He appeared as if by magic a couple of times later; we were taking our time here, and he wanted to be sure we weren’t sneaking photos, I think. (The photo on this page is from Wikipedia.) I asked about the wellhead as we left, and slipped a euro into his palm: he had made no gesture to ask for it, but was quick to understand my intention.