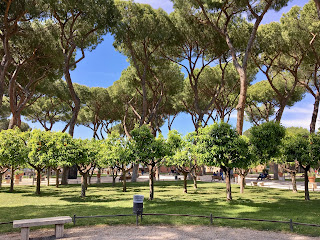 Via Damaso Cerquetti, April 22, 2017—
I THINK IT BETTER to build gardens than palaces. Especially public gardens, or at least gardens accessible to the public. As the world’s population becomes increasingly urban, parks and gardens stand as the last link between humanity and nature, and you can’t escape the fact that nature is what governs much of human activity.

Gardens are controlled, as much human activity must be: but one of the pleasures of strolling in a garden is contemplating the degree to which that control is achieved, how the site chosen, the architecture of the garden, the selection of its plants, and the continuing maintenance influence its state. Not its success: it seems to me all gardens are successful, even ruined ones, on their terms; because it seems to me necessary to grant nature her terms and “values” equally to those of ours. Perhaps more.

Yesterday was opening day of Rome’s Roseto Comunale, the rose garden above the Circo Massimo, at its western end. We’d walked by it a few days earlier, to find the gates closed and workers busy inside: yesterday the iron gates stood open, at least to the larger garden, and there were no workers to be seen other than those still busy in the smaller one, on the north side of the Via di Valle Murcia.

The southern, larger garden is on a gentle hillside, not terraced, divided into large symmetrical beds, separating the roses by type: shrub, hybrid tea, David Austin, my favorite old roses pre-hybridization. Around the garden on the uphill side an arbor draws the semicircular border of this quite large garden, for climbing roses. The paths are paved under the arbor and on the stairs leading down from it into the beds; otherwise they’re gravel.

A day after this visit I read that the paths were deliberately laid out in a shape representing the menorah, because this hillside was once the Jewish cemetery, when Jews were confined to the Roman ghetto. I don’t remember where they moved the bodies to, or why; it was a long time ago, and a long time before the making of the Roseto, in 1950, I think. I suppose if I’d known this, and if I were Jewish, my contemplation of the garden would have taken a different course. I like it that the symbolization is subtle, there for those who want it, not at all obvious for those to whom it makes no difference.

Even before discovering the garden plan, and before approaching individual rosebushes — easy to do, as they’re set widely apart and still small in this early Roman spring — I was interested in the lawn the bushes are set on. “Lawn” is perhaps not quite the word. The hillside is essentially a grassy field which was apparently mown quite recently, and long grasses lie on the beds — clearly not all the mown grass; much of it must have been removed; but enough remains to show how tall the grass had been allowed to grow.

I suppose it’s there as a partial mulch. If I lived in this city I’d be back here every couple of weeks to see not only the evolution of the bloom but also the management of the grass. There are recessed sprinkler heads here and there, and my companion noticed some mildew already present here and there: but this north-facing, very open site is exposed to wind, and I imagine discreet sprinkling works well, the water quickly evaporating from the leaves.

The roses! Already most of the bushes are in bloom; you can smell this garden a city block away, downwind. (Not that there really are city blocks in this part of town.) I didn’t make any noes, and I’m not about to tell you what’s included specifically: but there are hundreds of varieties here, set out , as grows apparent only slowly, in straight lines within the curve-boundaried beds.

As you can tell I like roses but not enough to memorize names and pedigrees — though the history of rose culture is an interesting one, and intersects, of course, with most other branches of human history. I don’t even carry in my mind the names of the roses Lindsey has planted on Eastside Road: there must be over thirty of them by now. Like her, I tend to favor the scented roses, and for years roses were bred not for scent but for showiness, sacrificing, it seems to me, their essential quality in favor of brash color, size, and length of bloom. There’s a metaphor here; I needn’t belabor it.

Not far from the Roseto, still on the Aventine hill, stands the church (or is it a basilica? I’m always confused about this) of Santa Sabina, a fine, austere, serious building just overhauled, and successfully so, for last year’s Catholic Jubilee Year. And next to it is the Giardino degli Aranci, as the Romans call their Parco Savello — the garden of the orange trees. Like the Roseto it’s a fine place to get away from the hum of the city: a flat half-acre, more or less, very symmetrical, of clipped weeds, I would say, and bitter-orange trees, with high walls on three sides and a marvelous viewing platform on the north.

A folding chair, a guitar-stand, and an amplifier and loudspeaker stood near the center of the park when we visited. Mercifully they were unattended. I think music, especially amplified music, is out of place in these gardens, unless a concert has specifically been planned. I prefer the sounds of the breeze in the trees and the occasional bird, though the gulls and magpies populating these gardens rarely sing, and that’s good too, you can hardly call their vocalisms song.

Many years ago I was present at the premiere of Douglas Leedy’s Exhibition Music, written specifically to be performed in a garden, on the occasion f the twentieth anniversary, I think it was, of the founding of the United Nations. Instrumentalists and singers were stationed at various places within a fairly extensive garden looking out over San Francisco Bay toward the site of the Charter’s signing. They played and sang quietly, each for himself, not coordinated in any but the most basic way, each expressing an individual musical comment within a context of mutual harmony. Guests strolled the garden, discovering this detail or that, lingering at moments of their own pleasure or interest, in a musical and horticultural metaphor of international cooperation.

That’s the kind of music I’d like in my garden, but only on occasion.

The formal symmetry of this Orange-Tree Garden, and the scent of the orange blossoms, inescapably brought the orange groves in the Andalucian mezquitas, but this park owes its origin, apparently, to St. Boniface — though he is said to have brought the original tree, true enough, from Spain; the first orange tree to grow in Rome. And the tree was of course reputedly miraculous and never-dying; and in truth when work was done recently a 15th-century coin (or was it 14th?) was found in its roots. That doesn’t prove anything, of course, for the right price I could buy an imperial Roman coin to plant with the next fruit tree I plant at home, and maybe I should, just to confound someone decades hence, as I’ve already buried a valuable hand-forged Sardinian knife from Pattadà in concrete poured into a fencepost hole, though that was not intentional.

Posted by Charles Shere at 1:28 PM