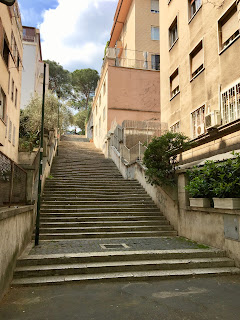 FIVE DAYS we have been here with little done or seen. Little, I mean, of the things one intends to see or do. I have not been at the peak of my powers and my pace has adjusted accordingly, and the fourteen-year-old sleeps long and competentlly. So there’s not much to report.

We are in Monteverde, a quarter of eight-storey palazzi, condominiums. Our street is narrow, with cars parked alla spina on both sides; the traffic is one-way only; there are often double-parked cars or temporarily parked trucks. One walks in the street; it seems natural.

Across the street we have a convenient supermarket, Tuo Dî, but I prefer a slightly smaller minisupermarket, Tigre, at the other end of the block: it has a good bakery for bread, a good cheese and sausage counter, an adequate selection of staples. There’s a fine greengrocer another block away. Other than this we have not explored the neighborhood.

We’ve taken long bus and tram rides, as the goal of this first week was to secure a visa to Algeria, and the consulate is completely across town from us, in the Borghese district. Let me tell you about my first visit, on Thursday: we took the Tram 3 from Trastevere station, easily getting seats since it’s one end of the line, and listened in some outrage to a man shouting at the woman seated across the aisle from me that she should be speaking Italian. She was talking to someone, as discreetly as can be done, on her telephone; I couldn’t make out the language; she looked Southeast Asian and seemed very nice. We are in Italy, this is Italy, we are Italians, we speak Italian, he shouted. She said something quietly in return, in Italian.

This only encouraged him to enlarge his tirade. Finally a woman standing near him told him he was behaving uncivilly, that one has a right to speak whatever language one wants. The tram was getting more crowded as it continued down its course. Other passengers, seated and standing, looked on uneasily. The man began to include her in his tirade, of course, once or twice standing up, pulling off his dark glasses, then replacing them and sitting back down.

You have no business shouting at this woman, another man said. He’d been standing nearby, briefcase in one hand, the other gripping a stanchion. She has done nothing to you, nothing at all. You set a very poor example of what an Italian man should be.

Dark-glasses stood back up to confront this new adversary. Don’t talk to me; don’t tell me what to do; that woman has no business here.

Racism, the woman with the telephone said, it’s nothing but racism, it’s as good an example of racism as you can see. The passengers around her, seated and standing, shifted in their seats uneasily. The standing woman continued her advice, quietly but firmly, like a mother explaining civility to her eight-year-old boy. The man in the dark glasses erupted from time to time, then dropped back into sullenness. The man with the briefcase spoke quietly to the quiet woman. The woman with the telephone, sitting across from me, apparently quite composed, continued her telephone conversation. Perhaps she was used to this.

At the end of our long tram ride we had a few blocks to walk, fortunately slightly downhill, then one of those monumental staircases to climb, and then we were confronted with a locked door: the consulate was closed. Twelve thirty. I couldn’t prevent H. from coming to pick us up with his car, but the traffic was dreadful. He dropped us off at Eataly where we had our midday meal at 2:00, the returned home via bus and tram, this time without incident.

Next day, though, yesterday, was much the same: I took a delightful bus ride, no politics or razzismo marring it, around the dial encircling Rome from eight o’clock, where we are, up through the Janiculum hill vistas, the pines, the statues, the sense of endless space, down to the Vatican at roughly eleven o’clock let’s say, through the bourgeois residence-and-shopping quarter Prati, much like ours but earlier and more engaging architecturally, across the Tiber once, twice, yet a third time and through the quarter of new museums and concert hall at twelve o’clock on the clock, then up diagonally through the Borghese district where I got off at Euclidio.

I walked a few blocks gently uphill in an area of distinctly upperclass residences and consulates, arriving at my destination in plenty of time. I was denied a visa, though. As an American resident, I must request the visa at a consulate in the US. For my convenience the People’s Democracy of Algeria has not one but two consulate in the US, one in Washington D.C., the other in New York City.

This consulate can give visas only to people who reside in Italy, and prove it with the official Italian permit of residency. Even though I do live in Italy three months every year, with my granddaughter -- I don’t, of course, but it’s a reasonable idea -- and, residing less than three months plus a day, don’t need a residence permit, nevertheless for this visa that doesn’t count: I must have an Italian passport, or an Italian proof of residency.

By now the discussion, in rapid Italian, French, and English, was wearing me out, and I stepped out into the welcome clear air. Rome is in a valley: the city’s low, on the riverbanks; the best air is higher, in the Janiculum and the Borghese. I had to send an email home to explain what had happened and what I might do next. But a guard challenged me: You must go to the waiting room. The air is bad there, I said. Have your finished with your business? Yes, I said, I just have to send a text. You have no business sitting there, he said, you must go back to the waiting room or go away.

Well, that at least was an easy choice, so I went away, and walked down one of those immense staircases, and took the bus home to rest up.

Posted by Charles Shere at 2:07 AM