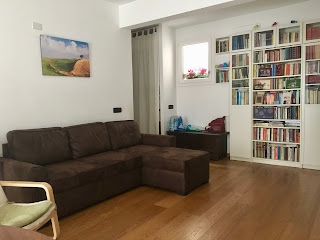 Via Damaso Cerquetti, April 11, 2017—
LET ME DESCRIBE our apartment, found at Airbnb. It is one of four on the sixth floor of our wing of our eight-storey building. I imagine the others are all similar or identical.

The lift brings you to a landing also served by the staircase, daylit by windows. The front door, heavy and securely locked, opens into a very small entry with a curtained coat-closet to the right: to the left is the pullman-style kitchen, ahead you step directly into the salon, let's call it.

Turn to the left as you step into the salon, which is perhaps ten by fourteen feet, roomy enough for an armchair, a sofa with an extension, an antique cabinet full of stemware and bottles of spirits, and a side table-desk with a lamp, and you see one of the two doors leading to the narrow balcony. Between it and the other door to the left there's a round dining table easily seating six.

The wall separating salon and kitchen has, salon side, shelves for books, DVDs, CDs, and a niche for a huge TV; kitchen side it provides room for a good-sized refrigerator-freezer, cabinets, a counter, microwave and the like. Opposite that is counter space, the sink, dishwasher, more cabinets, and five-burner range. The kitchen is small: two people can work simultaneously (especially we two) only with difficulty. But it is ample. 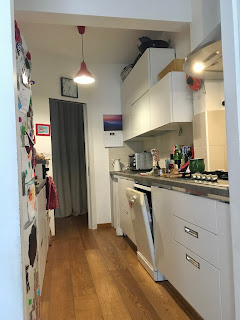 All the walls and ceilings are painted white; the apartment is luminous, thanks to the two large glass doors, whose white draperies suffuse the light. Opposite them a small window looks out onto the lightwell: on its sill, the owner has set pots of red-flowering succulents resulting in a still life that always enchants me. Continuing past these rooms: to the right, another curtained closet I haven't found need or use for. To the left, our bedroom, queen-size bed, desk, closets with drawers behind floor-to-ceiling walls filling one wall; window looking to the southwest, like the balcony windows.

Again, everything is white. The bed is extremely comfortable (a good thing: I've slept fourteen hours at a stretch a couple of times!). Like most Italian windows these are provided with let-down steel shutters, manually operated with heavy canvas tapes, effectively darkening and silencing the room at night.

The second bedroom is much the same but furnished with stacked single beds — bunk beds.

There are two bathrooms: ours has tub and hand-held shower which I use mounted on its wall hanger, toilet and bidet, and basin. The other lacks bidet and tub but boasts a fine good-sized shower. 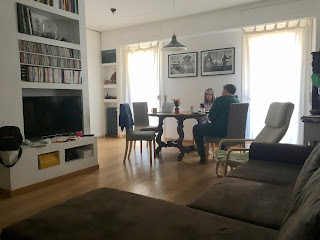 The apartment is quiet. The Bosch refrigerator makes very little noise. Somewhere a clock is ticking — oh, wait, that's the toaster-oven. Every morning the upstairs neighbor runs a manual carpet sweeper over the floor; that's all we hear from her. Our street, as I've mentioned, has parking herringbone style on both sides, but I've rarely seen anyone driving on the street. There are two supermarkets across our street, as I've also noted; but I've never seen or heard them being supplied. They must be supplied by small trucks: there's no way a tractor-trailer rig could get to them.

As I've written, we're in Monteverde, the city of apartment towers (none higher than eight or nine storeys) immediately to the south of and contiguous to Trastevere. Heading north along the river you'll walk through Trastevere, similarly residential-small commercial but several centuries older; than past a big jail; then through Vatican City; then into Prati. Monteverde is essentially built on the slopes of the Janiculum hill; its apartment buildings mostly all-alike but set pleasingly on the terrain and designed around central lightwells.

Prati's buildings are more individuated, it seems to me, and there is greater distinction between purely residntial areas and those with shops, many of them upscale, on the ground floor of he residences. I am very fond of the design of these buildings, which make me think of the old cartoon strip Jiggs and Maggie. In Prati, too, there are more trees, though our oval Piazza Dunant has its fine Roman pines, and the boulevard leading up the Gianicolo its redbuds and sycamores.

We have been spending too much time in this apartment, because this has been an unusually difficult recovery from flight day for me, because of a medical intervention I unwisely accepted the day before flight, leaving me sore, tired, weak, and frankly more confused than usual. Gradually things are resolving; as you see I write fairly coherently again, and there's time left for further explorations…